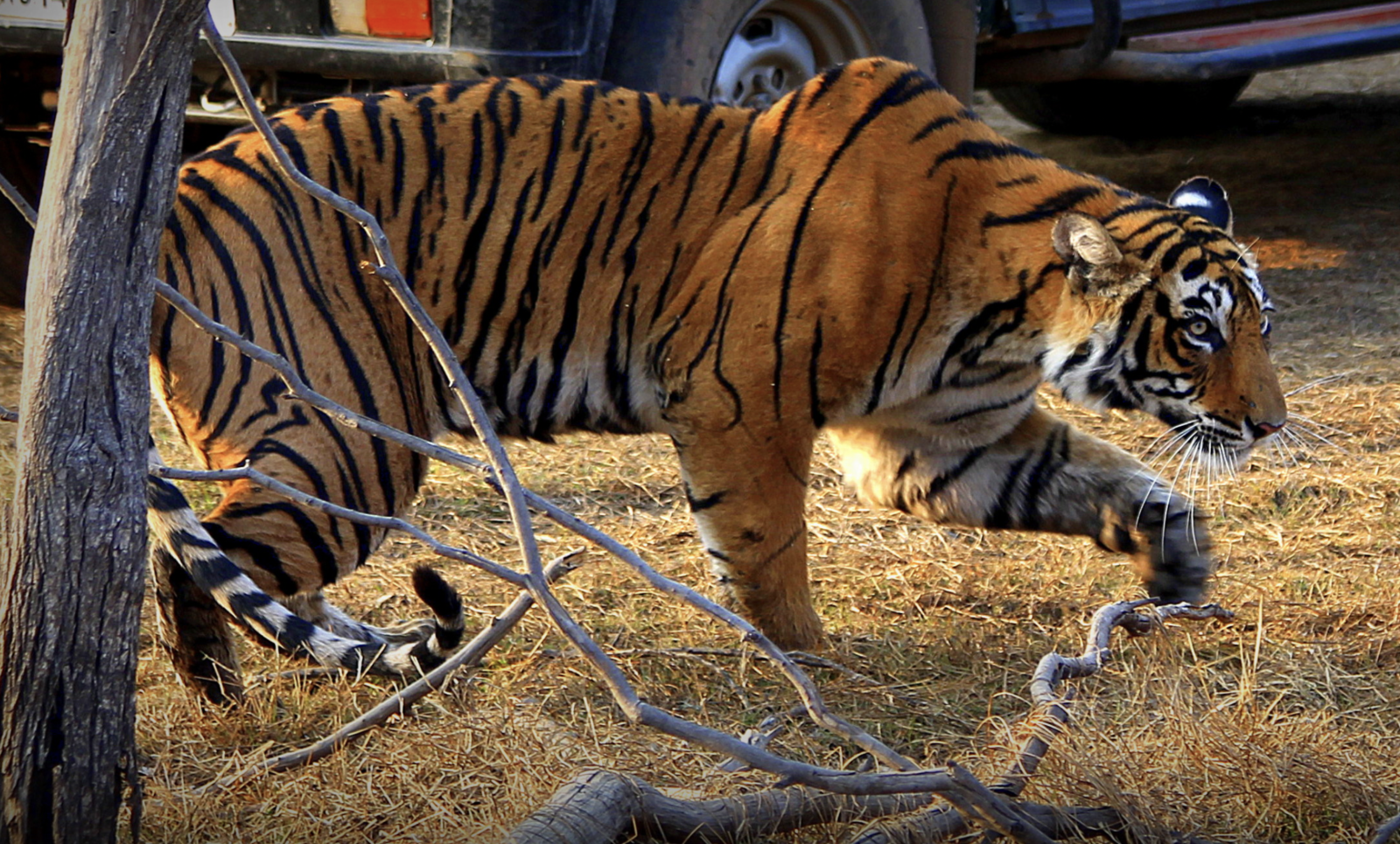 Kochi: Being isolated from other populations has made the tigers of Rajasthan’s Ranthambore national park up to twice as inbred as those in larger, more connected populations. This ‘feature’ can affect their survival – to the point where they could go locally extinct, according to a study published on December 1.

One way out, the researchers who conducted the study say, is for park officials to “rescue” them by introducing tigers from a different population to Ranthambore, thus increasing the local genetic diversity.

Ranthambore National Park and Tiger Reserve is home to around 55 tigers, according to the 2018 tiger census (which pegged India’s total tiger population at 2,967). Ranthambore’s big cats are among the most-photographed by safari-goers – and also well-studied. Many have names, and the state forest department keeps regular tabs on tiger births, deaths, lineages and movement.

Scientists also study this tiger population frequently, to estimate tiger numbers, examine what they eat and the habitats they use, and to understand how their genes determine their identities, sexes, sex ratios and ancestries. Genetic data – taken from DNA in tiger faeces, hair or blood – can also tell scientists how the entire tiger population is doing.

For example, the same team of scientists behind the new study also reported in 2020 that almost all the tigers in the park had descended from a single female – a famous tigress named ‘Machli’.

And in 2017, they found that this population of tigers, in northwest India, was one of three genetically distinct populations in the country. The others are in central India and southern India. They also noted evidence that the tigers in Ranthambore are highly related and that their population has low genetic variation. That is, there are fewer differences in the DNA between individuals of this population.

Low genetic variation is a common feature in small, isolated populations – in which related individuals breed among themselves. This often results in offspring with “deleterious mutations or ‘bad’ alleles,” Uma Ramakrishnan, a professor at the National Centre for Biological Sciences (NCBS), Bengaluru, and an author of the 2017 and 2021 studies, said. An allele is one form of a gene that has multiple forms.

Tigers with such reduced genetic fitness have lower chances of bearing children of their own (a recent study reported that inbred male mountain lions showed abnormal sperm production), and could lack innate defences against life-threatening diseases like cancer. Over time, a tiger population that is weak in this way could be naturally wiped out.

The 2017 study had called such inbreeding a “realistic possibility” among Ranthambore’s tigers.

Also read: Machli, the Tigress Who Reigned Over Ranthambhore

To confirm if the tigers that were related to each other were also breeding among themselves, scientists from institutes including NCBS, the Wildlife Institute of India, Dehra Dun, the Nature Conservation Foundation and the Kerala Forest Department, examined the genomes of 57 tigers from three populations: Ranthambore and the two larger, better-connected populations of central and southern India.

They identified stretches of the genome that were homozygous – that is, with identical alleles for each gene inherited from each parent. They found a high level of homozygosity, a sign that Ranthambore’s tigers were indeed inbreeding, and up to twice as much as those in the large and connected populations were inbred. And at a level, the researchers wrote in their paper, “empirically associated with high risk of extinction”.

They also found a high mutation load – the number of undesirable mutations that can reduce the population’s ability to survive – among the 18 tigers from Ranthambore.

At the same time, the team also reported that all three tiger populations were purging some of their bad mutations through subsequent generations – and that the Ranthambore population was doing this the most.

“This,” Ramakrishnan said, “is exciting.”

This is because purging could allow small and isolated populations to persist for a very long time, in spite of inbreeding.

However, Ramakrishnan & co. found that this ‘natural purging’ didn’t remove all bad mutations and make the tigers’ inbreeding problem go away.

Indeed, purging will not mitigate concerns regarding inbreeding in small tiger populations, Byron Weckworth, director of conservation genetics at Panthera, a non-profit in New York, said. He was not associated with the study.

“Genetic risks remain for populations that are persistently small, and addressing the small population paradigm as a threat must remain on the forefront of conservation efforts for all species,” he wrote in an email to The Wire Science.

This is why Ramakrishnan and her team  recommend a “genetic rescue”: introducing tigers from another population to reduce inbreeding and increase genetic variation. This, they write, could be the most proactive strategy to save the tigers of Ranthambore.

India will need to follow a scientific strategy for such tiger introductions, Ramakrishnan told The Wire Science. “Where the new tigers are brought in from will matter [emphasis in the original]. Tigers from the Terai, or nearby Kanha, would be the best bets.”

Then again, while introducing new tigers could be a good immediate-term option, the “best strategy”, the paper reads, is to increase connectivity between tiger populations.

Also read: The Two Tigers That Make the Case for India to Protect Its Wildlife Corridors

Weckworth agreed the study’s findings support the need for genetic rescue. He added that studying genomic diversity among individuals and all tiger populations, and identifying the right source and recipient populations for genetic rescue, could benefit tiger conservation management. He also said landscape management should emphasise habitat restoration to facilitate connectivity.

“Yet this will take time even under the most aggressive land-use planning efforts.”

A study published earlier this year suggested that recent habitat fragmentation and loss of connectivity could be the distal cause of India’s tigers breeding among themselves.

At present, tigers in the country are restricted to protected areas, and movement between these patches is often through human-dominated areas. This is where habitat corridors could come in handy. The NTCA’s ‘Tiger Conservation Plan’ mandates officials to connect different tiger populations across reserves. It also requires any land-use change in tiger corridors to have the approval of the National Board for Wildlife.

However, tiger corridors across India have come under the scanner because development projects have threatened to overtake them. Some states, such as Goa, haven’t even started declaring tiger corridors yet.

Wildlife corridors to help tigers move around assume greater importance in the context of sustaining viable tiger populations. Almost half of India’s tiger reserves have core area sizes that can’t potentially sustain 20 breeding females – the minimum number for a viable population, according to the Wildlife Institute of India.

The news of Ranthamabore’s tigers being inbred to the extent that the population could be lost is a wake-up call  not just for Rajasthan but for tiger management across the country, Tomar, the state’s chief wildlife warden, said. “Tiger management in India as a whole needs a review to determine what kind of course-correction is required.”