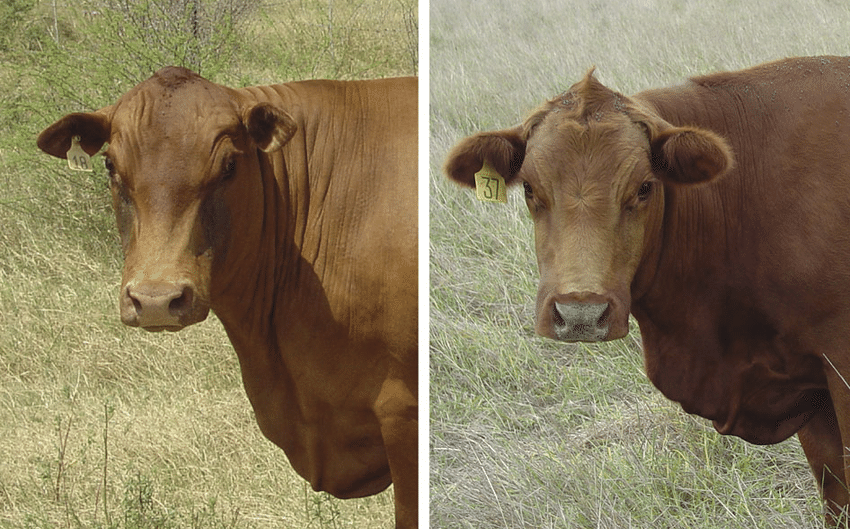 Cattle with a slick-hair coat (left) and a regular coat. Photo: Scientific Figure/ResearchGate CC BY 4.0

New Delhi: The US Food and Drugs Administration (FDA) has for the first time cleared the decks for meat from gene-edited animals to hit the market after it determined that cattle whose genome was altered to develop a short-hair coat does not raise any safety concerns.

In a press release issued on March 7, the agency said it had reviewed data submitted by the developer Acceligen that confirms that the intentional genomic alteration in the cattle is “equivalent to naturally occurring mutations that have arisen in several breeds of cattle as an adaptation to being raised in tropical or subtropical environments”, referred to slick-hair trait. The genome-edited breed will be called “PRLR-SLICK”.

The modification would allow cattle in the US to adapt better to increased temperatures due to climate change. The FDA said that scientific literature suggests that cattle with a short, slick-hair coat are “potentially able to better withstand hot weather”. Subsequently, cattle that are comfortable in their environment are “less likely to experience temperature-related stress and may result in improved food production”.

While the agency has made low-risk determinations for goats, chickens, salmon, rabbits and pigs with intentional genomic alterations, they were for non-food uses.

The low-risk determination is significant because the developer will not have to seek the FDA’s approval once again before it markets the beef from these cattle. Farmers who want to breed the cattle will also not need to register with the FDA.

The FDA’s release said that the product developer anticipates meat products from PRLR-SLICK cattle will be available for purchase by general consumers as early as two years.

While PRLR-SLICK cattle will be able to deal better with hotter temperatures, the role played by methane emissions from livestock – specifically cattle – in driving climate change are well established. The United Nations Food and Agriculture Organisation estimated that 14.5% of all anthropogenic greenhouse gas emissions are from livestock.

“Cattle (raised for both beef and milk, as well as for inedible outputs like manure and draft power) are the animal species responsible for the most emissions, representing about 65% of the livestock sector’s emissions,” the 2013 report said.

Another UN agency, the Environment Programme, suggests that farmers can reduce methane emissions simply by providing animals with more nutritious feed so that they are “larger, healthier and more productive” – effectively producing more with less. Experts also argue against industrial cattle breeding, advocating for traditional practices like herding.