Origins of COVID-19: Who Opened Pandora’s Box at Wuhan – People or Nature?

On April 29, the Union Ministry of AYUSH1 announced that AYUSH 64, “a poly-herbal formulation developed by the Central Council for Research in Ayurvedic Sciences (CCRAS),” could help meaningfully treat “asymptomatic, mild and moderate COVID-19 infections as an adjunct to standard care”.

Standard care, technically ‘standard of care’, according to the US National Cancer Institute, is “treatment that experts agree is appropriate, accepted, and widely used.”

The press release in which the government made the announcement claimed that researchers had conducted a randomised controlled clinical trial with 70 participants in each arm (placebo arm and treatment arm) at three centres. They had reportedly demonstrated “significant improvement” and a lower “period of hospitalisation” as compared to treatment by the standard of care alone.

However, the press release made no references either to a preprint paper or a manuscript published by a scientific journal.

On May 3, another release from the same ministry announced plans to encourage more pharmaceutical companies to manufacture AYUSH 64, under a license. The ministry also encouraged the relevant administrations in India’s states and union territories to make the drug more widely available.

Three days later, on May 6, as the second wave of India’s COVID-19 outbreak surged and India was reporting upwards of 4 lakh new cases a day, the AYUSH ministry launched a nationwide campaign to distribute AYUSH 64 and a phytotherapeutic liquid called ‘Kabasura Kudineer’. 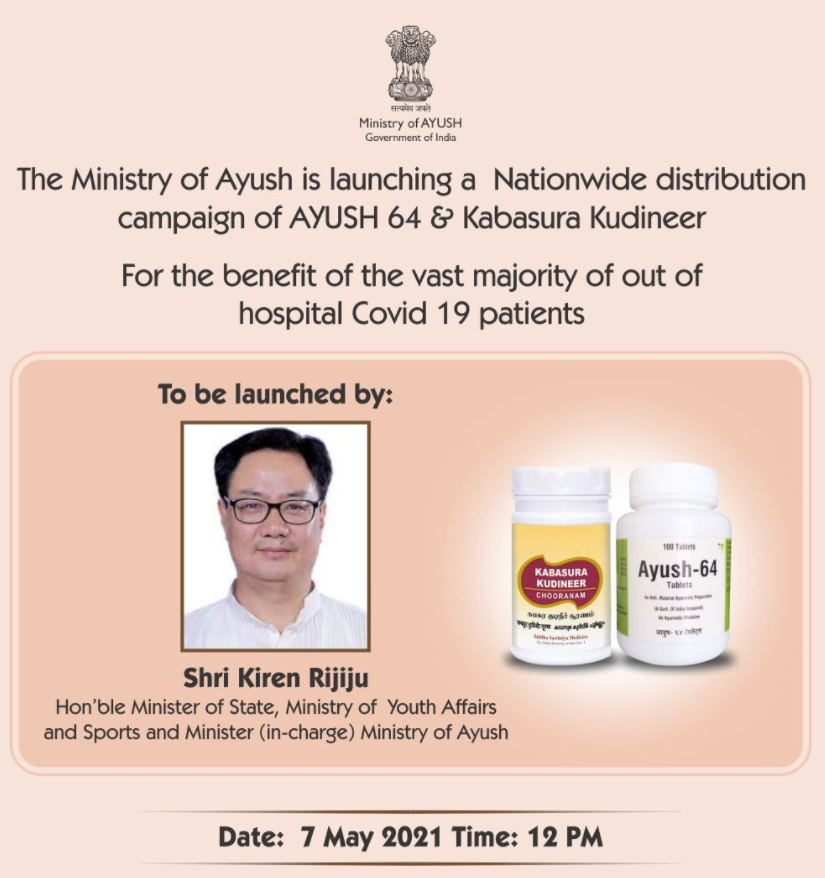 There are two problems with this kind of publicity. The first is concerned with the scientific validity of the claims surrounding AYUSH 64. There is little doubt that the Government of India is making cynical use of its COVID-19 epidemic to promote Ayurveda – or its version – and other ‘alternative’ systems of medicine.

There is no reliable scientific evidence that any of these drugs have any benefits, let alone benefits that outweigh risks (including out-of-pocket expenses). The clinical trials that the government notes have said ‘prove’ these drugs’ potential are all small and use soft endpoints like time to recovery – instead of hard endpoints like death at 28 days. They also measure improvement of symptoms that are easily fudged. And based on these misleading claims, various entities widely market these products as ‘treatments’, and sell them to a people already pushed to display faith rather than exercise reason.

This is not the first time that the Indian government has openly promoted its blind and persistent beliefs in ‘traditional medicine’, notwithstanding its attendant refusal to justify the ‘traditional’ label. Two ministers of the Union cabinet appeared in public to help Patanjali Ayurved, the FMCG corporation owned by yoga guru Baba Ramdev, launch a product called ‘Coronil’ that the company has claimed can help treat COVID-19. Earlier this year, the Department of Science and Technology funded a clinical trial: to test the effects of chanting the Gayatri mantra and performing pranayama on COVID-19 patients. The Government of Gujarat is also reportedly setting up a 40-bed facility where the principal treatment will be medicines and recitals centred on cows and cow products.

While one part of the Indian government’s scientific advisory bodies have been recommending policies and actions in line with scientific findings, another section of the same government is determined to pursue pseudoscience.

The second problem is the potential for the government’s public health messages to confuse, by interfering with what is true: that the epidemic represents a serious public health crisis; the second wave sweeping through the country is deadly, there is no one proven cure for COVID-19 and that, therefore, preventive measures are vital. Effectively communicating this message to people can make the difference between success and failure, life and death.

In December 2020, the British Psychological Society published a series of recommendations for effective public health messaging, borrowing from ideas in behavioural science. They are collected in an acronym: ‘TRUST’. All messages and other communiques with the people must be characterised by the following:

I am no great fan of such trite acronyms but the basic concept is in fact commonsensical. When every member of the top leadership of an organisation or a country clearly and consistently repeats the same simple and convincing message, the message will get through over time. This is not the same as propaganda – where the message is based on a lie (or at least a twisted form of the truth) and isn’t socially responsible. In short, and in the throes of a debilitating epidemic, evil. It’s impossible to overstate the importance of transparency and being open to challenge to sustain trust and credibility.

By this yardstick, the Indian government’s public-health messaging, ostensibly designed to persuade people to change their behaviour to be more COVID-appropriate, has been a resounding failure.

There was no single high-level authority figure to serve as the face of the government’s epidemic response. Countries like the UK and New Zealand had their health or prime ministers (or both) repeatedly address the press, sometimes daily, and take questions; the Indian political leadership may have done the exact opposite. Prime Minister Narendra Modi appeared on TV on a few occasions, and even then only to announce major new policy changes and issue general appeals to wear face masks, maintain physical distances and avoid travelling. But his own actions – publicised even more widely for electoral advantages – completely negated his message.

India’s Union health minister, Harsh Vardhan, was also largely absent; when he did appear in public or issue a statement, it was either to claim success – which turned out to be horribly premature – or to defend the government against criticism in the press.

On the other hand, civil service functionaries led press briefings during which they focused more on pleasing their political bosses, less on transparency and credibility. They were also socially irresponsible when they singled out one religious gathering (the Tablighi Jamaat in Nizamuddin) as the primary cause of the novel coronavirus’s spread in the early days of the first wave. The Economist called for Vardhan, “who thinks diseases can be cured with the help of cow urine,” to go.

If actions speak louder than words, the most powerful leaders in the country are guilty – of negating any effect of India’s already anaemic public-health effort to change peoples’ behaviour when they personally encouraged large crowds to congregate, sans masks, distancing or other protections.

The Principal Scientific Adviser K. VijayRaghavan’s job was, and is, to ensure that policy, particularly when dealing with a pandemic, is driven by science. But the Kumbh Mela went ahead sans any a hurdle – after it was actually advanced by a year on the basis of bogus astrological considerations.

At a time when India faced its biggest peacetime national crisis, and desperately needed clear, consistent and credible messages from a leadership that valued science, the Indian people were met with a farrago of confused proclamations. The government’s priorities themselves haven’t changed one iota – remaining fixed on anything, even pseudoscience, that can keep the ruling party in power.