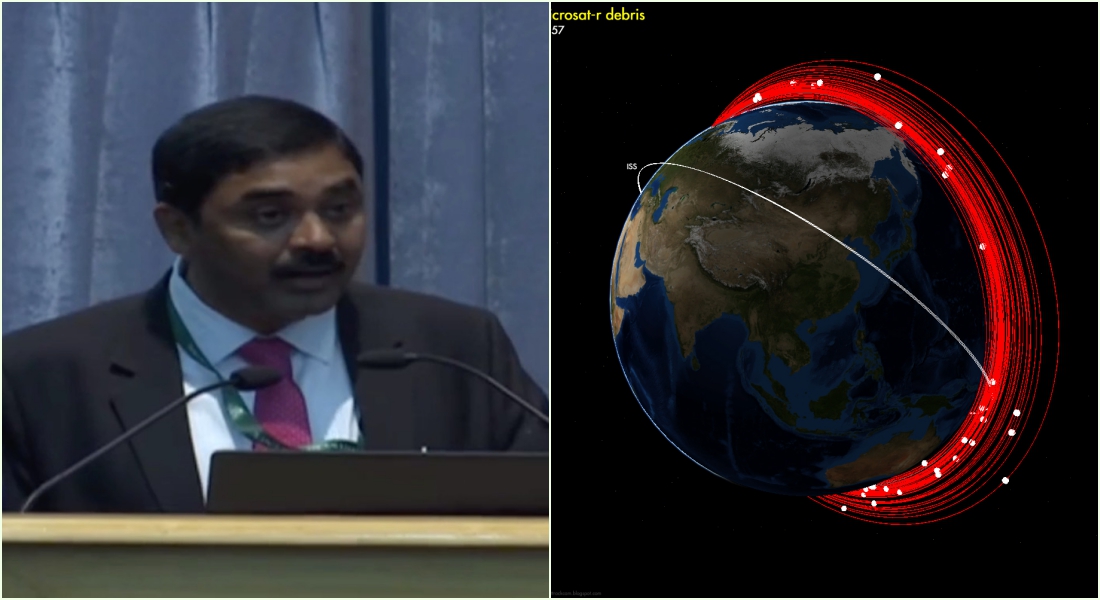 On March 27, 2019, India’s Defence Research and Development Organisation (DRDO) tested an anti-satellite missile for the second time, after a failed first test in February. In a live telecast, Prime Minister Narendra Modi declared the second test a success shortly after it was completed. During the test, an ASAT missile launched from a station on Kalam Island, off the coast of Odisha, had struck and destroyed a small satellite called Microsat-R, which the Indian Space Research Organisation had launched into a low-Earth orbit on January 24, 2019.

DRDO chief G. Sateesh Reddy assured the media that all the debris created by the event would reenter the atmosphere in 45 days (i.e. by May 11), and would pose no threat to other satellites. However, defence and spaceflight experts around the world disputed the official statement, and questioned the government’s claims to safety by pointing to tracking data that showed some of the debris fragments had been launched into orbits higher than that of Microsat-R and to orbital trajectories that suggested a not insignificant number of fragments would remain in orbit till late 2020. NASA chief James Bridenstine also expressed his displeasure at the prospect of threats to the International Space Station.

According to updates shared by Jonathan McDowell, an astronomer at the Harvard-Smithsonian Center for Astrophysics, on Twitter and North American Aerospace Defence Command data compiled by CelesTrak, at least 28 debris fragments are being actively tracked in low-Earth orbit or higher. There could be more fragments that are too small to track using ground-based instruments, which have eluded detection for other reasons.

Joseph Remis, a Twitter user who has been sharing regular updates on the ASAT test debris, has compiled the predicted decay dates for 28 fragments.

Predicted decay dates for #ASAT objects in orbit.
28 out of 125 remain in orbit. pic.twitter.com/cs8O9ryzCm

The Wire Science@TheWireScience
4 Following 27.1K Followers
Within the scientific workforce, women are still often expected to fulfill gendered societal expectations, especial… https://t.co/ipgCvCBj5j
7 hours ago
1
Is the egg good or bad? And, while we are on the subject, when so much of what we are told about diet, health, and… https://t.co/OZSyAuEyeU
8 hours ago
Deep in the frozen ground of the north, a radioactive hazard has lain trapped for millennia. But UK scientist Paul… https://t.co/MdARrq3hhB
12 hours ago
1 1
When corals and sea anemones absorb oxybenzone, their cells turn it into phototoxins, molecules that are harmless i… https://t.co/thbxBxJTxt
13 hours ago
1 3
For a long time, scientists believed that most of the adult human brain was unchanging and that all brain cells are… https://t.co/ha5JOzCH6F
1 day ago
1 2
"We will mourn a landscape only if we genuinely love it. I was fortunate to have the opportunity to experience my h… https://t.co/OqdxiG3rYD
1 day ago
Trout is an adopted fish with a colonial past, and its introduction in the Western Himalayas infused the lives of p… https://t.co/Q2pRlyrYEM
1 day ago
2
"… what is the meaning of academic freedom when the academy is itself put to work for the benefit of an imperial po… https://t.co/BcSMnQ7yJR
2 days ago
Black holes twist spacetime itself around themselves, trap information and warp the path of light. To see a black h… https://t.co/qLo7T1zaCM
2 days ago
1
Prime Minister Narendra Modi pitched on May 12 to reform the WHO's vaccine approval procedure "to keep supply chain… https://t.co/NMRnOVC92S
2 days ago
1
Apart from the destruction they wreak, flash floods have also deposited debris like boulders, stones and sand on fa… https://t.co/MC29Ugk5Tn
2 days ago
3 1
An analysis of human bones found in an abandoned well in Punjab has confirmed that they are the remains of Indian s… https://t.co/pU4itI2CfB
2 days ago
8 19
Are you a multispecies entity, made up of some human bits and some microbial bits – or are you just the human bits,… https://t.co/gfug0isry3
2 days ago
It is a wonderful and fortunate thing for a scientist to be born during a great decisive moments in the history of… https://t.co/cRIlWY3EHU
2 days ago
3
Being carbon-neutral means balancing one’s activities such that one’s net contribution to atmospheric carbon is zer… https://t.co/xszsxMEkH9
2 days ago
Contact us