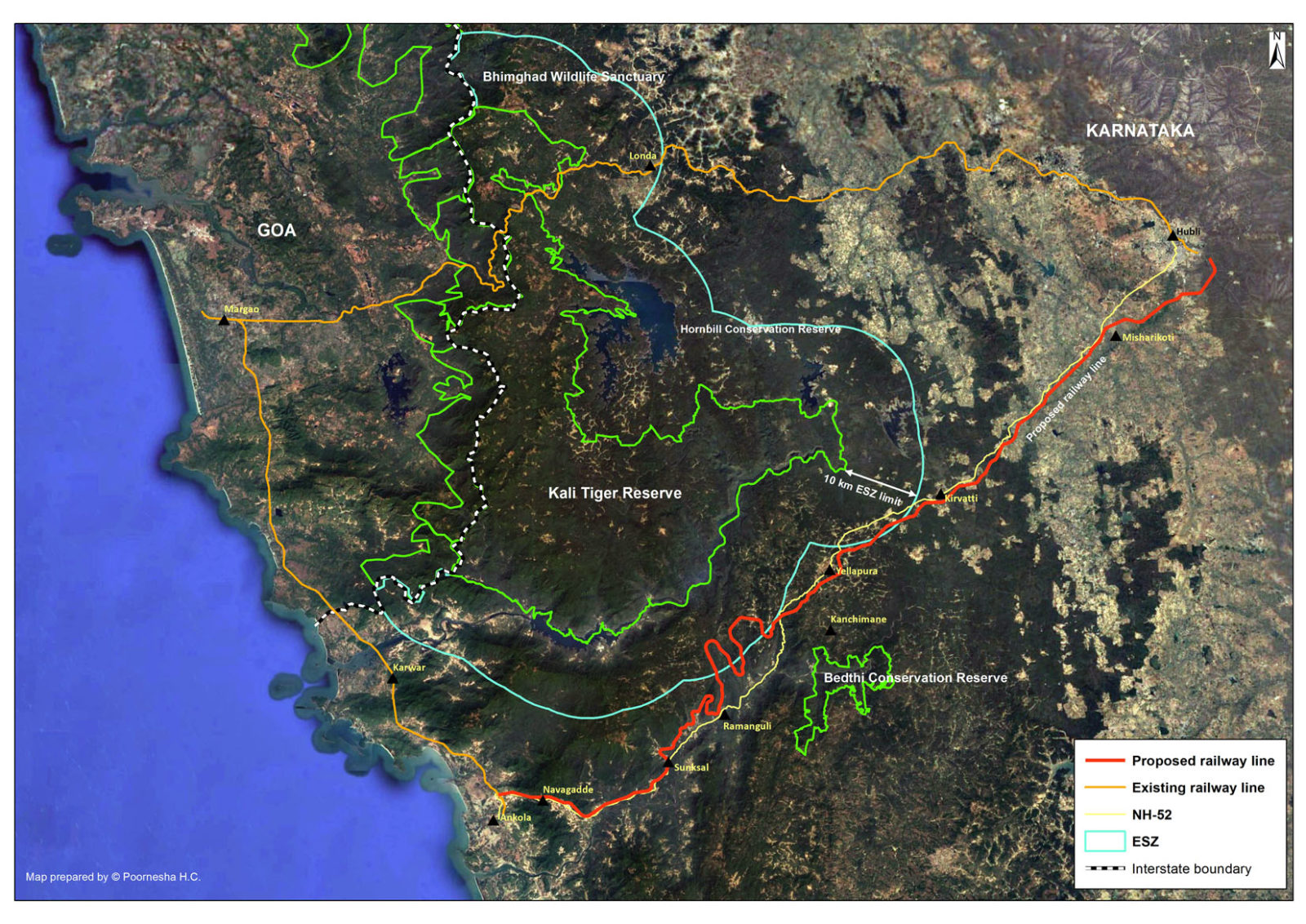 Is the Novel Coronavirus Airborne? Here’s What We Do and Don’t Know.

A group of 120 ecologists and activists, including several residents of affected districts, have written to Union environment minister Prakash Javadekar, Chief Minister of Karnataka B.S. Yediyurappa and the chief of the National Tiger Conservation Authority, asking that the National Board for Wildlife (NBWL) reject a proposal for the proposed Hubballi-Ankola railway line. The authors of the letter have written that the railway line will pass through an ecologically sensitive Western Ghats region and threaten 1.58 lakh trees.

The Karnataka State Board for Wildlife had approved the project proposal in March, overturning an older negative decision. The proposal is now awaiting consideration by the NBWL. However, on June 18, the Karnataka high court stayed proceedings pertaining to the project on the grounds of legality. The same court is set to conduct the second hearing of the project on July 14. The state government is currently considering its options.

The ecologists’ and activists’ letter is presented in full below, followed by the list of signatories (as on 3:30 pm on July 7, 2020).

Appeal to Withdraw the Proposal for the Hubballi-Ankola Railway Line

The country has been facing a challenging time due to the COVID-19 pandemic and the subsequent nationwide lockdown. This has created unprecedented challenges for India’s citizens as well as for governance. One facet that must not be forgotten at this time is the critical relationship between a healthy environment and healthy people. The United Nations Environment Programme Report identified ‘human encroachment on natural ecosystems’ as a key driver for the emergence of zoonotic diseases like the coronavirus. Thus ensuring the long-term health and stability of these ecosystems should be of the highest priority now.

Abrupt approval by the State Board for Wildlife

On 20th March 2020, days before the lockdown began, the Karnataka State Board for Wildlife approved the Hubballi-Ankola Railway Line that is set to destroy 596 hectares of forests in the Western Ghats. It is a threat to 1.58 lakh trees that will be cut in one of the most vital, biodiverse and pristine ecosystems in our country, as well as in the world. The execution of the project will spell disaster for the local wildlife and humans, worsening the climate crisis we are facing.

Despite being rejected several times by bodies like the Forest Advisory Committee, Ministry of Environment and Forests (Central), National Tiger Conservation Authority, Chief Conservator of Forests and Central Empowered Committee to the Supreme Court during the past 22 years, the project still found its way back to the Karnataka State Board for Wildlife, where it was abruptly passed during the 14th meeting of the Wildlife Board, just days after the matter was shunned due to stiff opposition. The Karnataka High Court has called this clearance into question, and on June 18 2020 (as per its order on Case No. WP 8067) has called for a halt on all activities pertaining to the project until further hearing. The order casts a doubt on the “legality of the decision making process adopted by the State Board”.

The High Court order calls into question the addressing of the meeting by the Minister for Large and Medium Scale Industries even though he is not a member. We have seen that some members of the Wildlife Board expressed disappointment with the clearance decision, with one member even resigning in protest after the approval was announced.

The primary reason for the project was to accommodate for the increase in iron ore freight capacity from the Bellary-Hospet region to the Western coastal ports. Since 2011, mining has become increasingly regulated in the region, with virtually no mining activities taking place in the Bellary region today. Other existing routes can thus accommodate the existing and anticipated traffic in the region.

The Principal Chief Conservator of Forests, while rejecting the project, pointed to the existence of several rail options for the transport of iron ore, including the Hospet-Chennai, Hospet-Kakinada/Vizag lines. Some of the alternatives are being used below capacity, according to his letter. He also points to the Hubballi-Ankola road, constructed with aid from the Asian Development Bank as another alternative. Therefore, he concludes that ‘there appears to be no case or national interest served by constructing the Hubballi-Ankola rail line’.

The ecological dangers of the project are manifold. The regions affected by the project are home to over 300 species of animals that come under the International Union for Conservation of Nature’s (IUCN) Red List. These include endemic species like the lion-tailed macaque (Macaca silenus), malabar grey hornbill (Ocyceros griseus) and the malabar pit viper (Trimeresurus malabaricus). Several of these species are endangered and are enshrined government protection under the Wildlife Protection Act, 1972.

Animals such as tigers, elephants and lion-tailed macaques require vast unbroken tracts of forests because they travel great distances in search of food, water and suitable mates (Umapathy and Kumar 2003, Gubbi 2016 ). The fragmentation of the forest by this railway line would restrict the movement of these animals, therefore, threatening their survival and increasing human-wildlife conflict in the region (Chartier 2011 ). Apart from this, deforestation will affect the ability of forests to regulate rainfall, control erosion and sequester carbon. The area affected due to the project would lead to a loss of 2.25 lakh tonnes of carbon sequestration, accelerating the effects of climate change.

Impact on the local population

The local population will also suffer greatly due to the implementation of the project. According to the Site Inspection Report of the team appointed by the National Board for Wildlife,”no passenger train will ply over along this track”. Thus, they conclude that the ”immediate direct benefits to the local communities by implementing this project is minimal”. The ill-effects that will be faced by the local populations are, however, manifold. Forest dwelling communities like Gowlis, Siddis, Kunbis, Halakkivokkaligas depend on collected forest produce like honey, wax, shigekai, canes, cashews, among others. The total economic value of goods from the affected forest area is estimated by the IISc Environment Impact Assessment Report to be Rs 29,700 crore annually, which stands to be lost.

The Western Ghats Ecology Expert Panel Report calls the Western Ghats the ‘Protector of the Indian peninsula’, warning how large-scale deforestation has led to erosion, flooding and landslides like the ones recently experienced in Kerala and districts of Karnataka. With the approval of this project, there are fears that similar events will affect the Uttara Kannada district as well. This project will also affect the catchment areas of the Kaali and the Gangavalli rivers. These rivers and their tributaries contribute greatly to the water supply for domestic and agricultural use in the Dharwad and Uttara Kannada region. There are already several reports of severe water shortage in these districts.

In 2018-2019, several taluks from the Uttara Kannada district like Bhatkal, Yellapur, Karwar, and taluks like Hubballi, Dharwad, Kalghatgi in Dharwad district were declared drought hit. Farmers were gravely affected by the water shortage, unable to take up sowing of their crops. The requirement of water by the Karwar naval base is, as of 2019, 6 million litres/day (MLD), but it has been receiving less than 1 MLD of water, which comes from the Gangavalli river. With the naval base expanding, its water requirement will only increase. If the catchment area of Kali and Gangavalli is further affected, water available in the river is set to further reduce, making conditions worse for local residents, farmers and fishermen depending on the river.

The shortcomings of mitigation measures

Mitigation measures proposed by the government include setting 796 ha of land for compensatory afforestation, setting up of people’s nurseries, fencing 800 ha of forest land to prevent smuggling and intrusions among other measures, but as the Chief Conservator of Forests stated in his 2004 Report, ‘no amount of mitigation shall compensate the huge cost of ecological damage which this project of rail track shall bring to the Western Ghats’. Forests, especially global biodiversity hotspots like the Western Ghats are complex networks of not just trees but also small plants, creepers, insects, fungi, mammals, birds and other living beings.

Also read: Your Guide to Mining and Other Projects the Wildlife Board Cleared During Lockdown

The combined growth, reproduction and interaction of all these different species is essential for maintaining critical ecosystem functions of the forest . This includes the ability of forests to regulate climate and rainfall, sequester large amounts of carbon, protect fertile topsoil, partake in nutrient and energy cycles, apart from regulating the flow of rivers and sheltering our rarest natural heritage. The history of tree plantation and compensatory afforestation in India has been fraught with problems of improper implementation, occupation of indigenous lands and creation of monocultures of non-local exotic species. Even if implemented successfully, it cannot even begin to replicate the crucial functions of an ecosystem that has taken millions of years to evolve.

Through this letter, we concerned citizens want to bring to your notice the extent of damage the Hubballi Ankola Railway Project will cause, irreversibly diminishing the already receding forest cover in the Uttara Kannada region, while not providing the benefits which could justify this destruction. We urge you, as the Chief Minister of Karnataka, as well as the Chairman of the State Board for Wildlife to look into this matter and take prompt action to withdraw the approval of Hubballi Ankola Railway Project so that our Western Ghats can be saved.

43. Priyank, Student and a part of the NGO, HSI, Humane Society India.

85. A Sabu John, Assistant Professor, CHRIST (Deemed to be University).