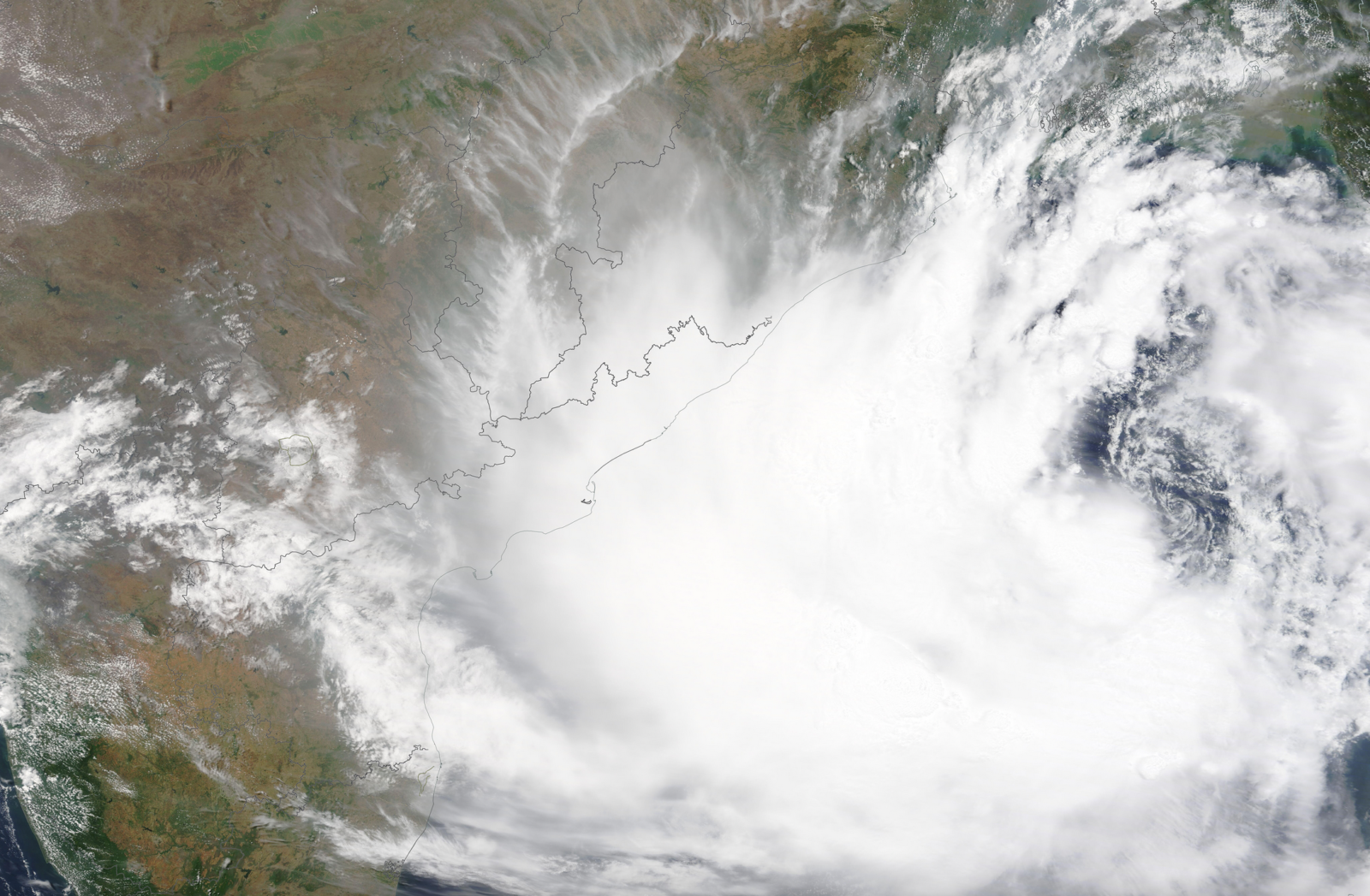 Satellite view of Cyclone Yaas over the Bay of Bengal on May 24, 2021. Image: MODIS Land Rapid Response Team, NASA GSFC

Bengaluru: At least two persons were electrocuted to death and around 80 houses partly damaged after a storm, which West Bengal Chief Minister Mamata Banerjee described as a tornado, hit Hooghly and North 24 Parganas districts on Tuesday.

The natural event struck hours before cyclone Yaas was to make landfall, near Dhamra Port in Odisha’s Bhadrak district early on Wednesday, in the wake of which the Bengal government has evacuated over nine lakh people to safe shelters.

In North 24 Parganas district’s Halisahar, the tornado lasted for a little over a minute, impacting 40 houses and injuring five people, she said, adding that local panchayat members had taken the to nearby hospitals.

The department has issued a red-coded warning alert to districts along the coasts of Odisha and West Bengal.

Yaas was positioned 160 km south-southeast of Paradip in Odisha and 240 km south-southeast of Digha in West Bengal over north-west and adjoining west-central Bay of Bengal on Tuesday evening. It is likely to gain a maximum speed of 155 kmph to 165 kmph, gusting to 185 kmph, during landfall, the department said.

“It is very likely to cross north Odisha-West Bengal coasts between Paradip and Sagar Islands, close to north of Dhamra and south of Balasore, as a very severe cyclonic storm,” the IMD’s cyclone warning division added.

Early on May 26, the IMD tweeted an updated forecast that placed landfall at “around noon”.

Very Severe Cyclonic Storm YAAS to cross Odisha coast between Dhamra and Balasore around noon of 26th May with wind speed of 130-140KMPH.

In response, flight operations at the Kolkatas NSCBI airport is to be suspended from 8:30 am to 7:45 pm, the Airports Authority of India said.

Chief Minister Banerjee said her administration has already evacuated over nine lakh people from coastal districts to the state’s 4,000 safe shelters. She also said over 74,000 officers and workers and over 2 lakh police personnel and civic volunteers have been deployed.

The Odisha government has said it has moved over 3 lakh people from vulnerable areas to safety.

“We are monitoring the situation 24/7. Control rooms have been set up at every block to monitor the situation, apart from the one at state secretariat Nabanna,” Banerjee said.

The Kolkata Municipal Corporation (KMC) board of administrators’ chairman Firhad Hakim, who is under house arrest in the Narada case, is monitoring the situation from home, she said.

A defence official said the Eastern Command of the Indian Army is coordinating with the West Bengal government and has deployed several columns for relief and rescue operations. The columns have been deployed at Purulia, Jhargram, Birbhum, Bardhaman, West Midnapore, Howrah, Hooghly, Nadia, South and North 24 Parganas districts.

Special relief commissioner of Odisha P.K. Jena said over 2.10 lakh people residing in kutcha houses in low-lying areas have been moved to cyclone shelters. The highest number of evacuees are from Balasore (74,132), followed by Bhadrak (73,103).

Around 5,000 pregnant women expecting delivery by June 1 have been admitted to hospitals, a health official said.

Chief Minister Naveen Patnaik has also rushed the minister of state for home D.S. Mishra to Balasore to monitor the situation in Odisha’s northern parts.

Jena said four coastal districts – Kendrapara, Jagatsinghpur, Bhadrak and Balasore – are in the high-risk zone, even as Yaas’s impact is expected to be felt in Mayurbhanj, Keonjhar, Sundergarh, Dhenkanal, Angul and parts of Puri and Khurda.

The state has also deployed 404 rescue teams including 52 from the National Disaster Response Force, 60 from the Odisha Disaster Rapid Action Force, 205 fire service teams, 86 groups of tree-cutters and 10,000 energy department employees in vulnerable districts, he added.

The Jajpur district administration has prohibited the movement of vehicles, barring emergency ones, on NH 16 from Chandikhole to Balasore from Tuesday midnight till landfall, collector Chakravarti Singh Rathore said.

Jharkhand has also evacuated people from vulnerable areas in East and West Singhbhum districts near the borders of West Bengal and Odisha and moved them to safety, a senior official said.