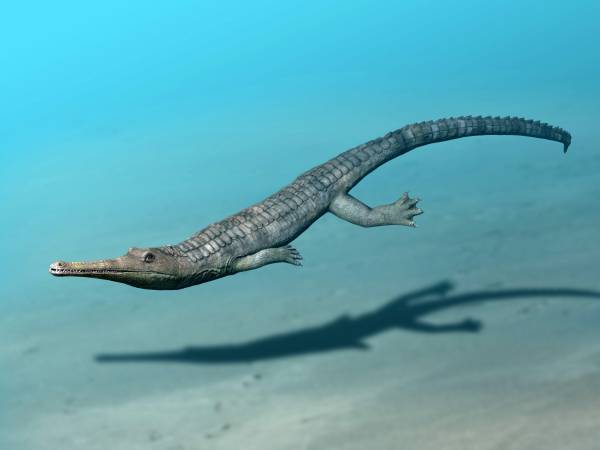 No COVID-19 Test Is 100% Right, so Their Errors and Results Are Both Important

Washington: A wondrous lineage of crocodile relatives that developed into fast-swimming seagoing predators at a time when dinosaurs dominated the land adapted to life in the open ocean with a pivotal evolutionary modification also present in whales.

But the crocs did it more than 100 million years earlier.

Research published on Monday detailed changes in the inner ear’s vestibular system – responsible for the sense of balance and equilibrium – in the marine crocs called thalattosuchians, which appeared in the Jurassic Period about 182 million years ago and died out in the Cretaceous Period about 125 million years ago.

Like whales, thalattosuchians underwent major skeletal changes as they evolved from land-dwelling ancestors, turning limbs into flippers, streamlining their bodies and developing a fluked tail for strong swimming.

They also altered their sensory systems as evidenced by inner ear changes revealed in CAT scans of fossilized thalattosuchian skulls. Three looping semicircular canals in the inner ear became markedly fatter and smaller compared to those in their terrestrial kin.

“The changes in canal shape are better suited to life in the oceans, where buoyancy can hold up an animal, as compared to land, where animals need a highly sensitive sense of balance to cope with gravity and complex landscapes,” said Julia Schwab, a University of Edinburgh geosciences doctoral student and lead author of the study published in the journal Proceedings of the National Academy of Sciences.

The whale-thalattosuchian inner ear similarities are an example of a phenomenon called convergent evolution in which disparate organisms independently evolve similar features – like the wings of birds, bats and extinct flying reptiles called pterosaurs – to adapt to similar environments.

Thalattosuchians reached up to about 33 feet (10 meters) long. Some like fish-eating Teleosaurus and Machimosaurus remained semi-aquatic, still looking much like a crocodile. Others like Metriorhynchus and Plesiosuchus were fully adapted for the open ocean, hunting fish as well as squid cousins and even other marine reptiles.

“Thalattosuchians are one of the most peculiar groups of animals to ever live and it’s shocking to me that they don’t receive more attention,” University of Edinburgh paleontologist and study co-author Steve Brusatte said.

“What’s really neat is that we can tell thalattosuchians started changing their skeletons first – limbs into flippers, fluked tail, et cetera – which allowed them to move into the water and become better swimmers, and only later did their ears change, as their sensory systems had to evolve to keep up.”