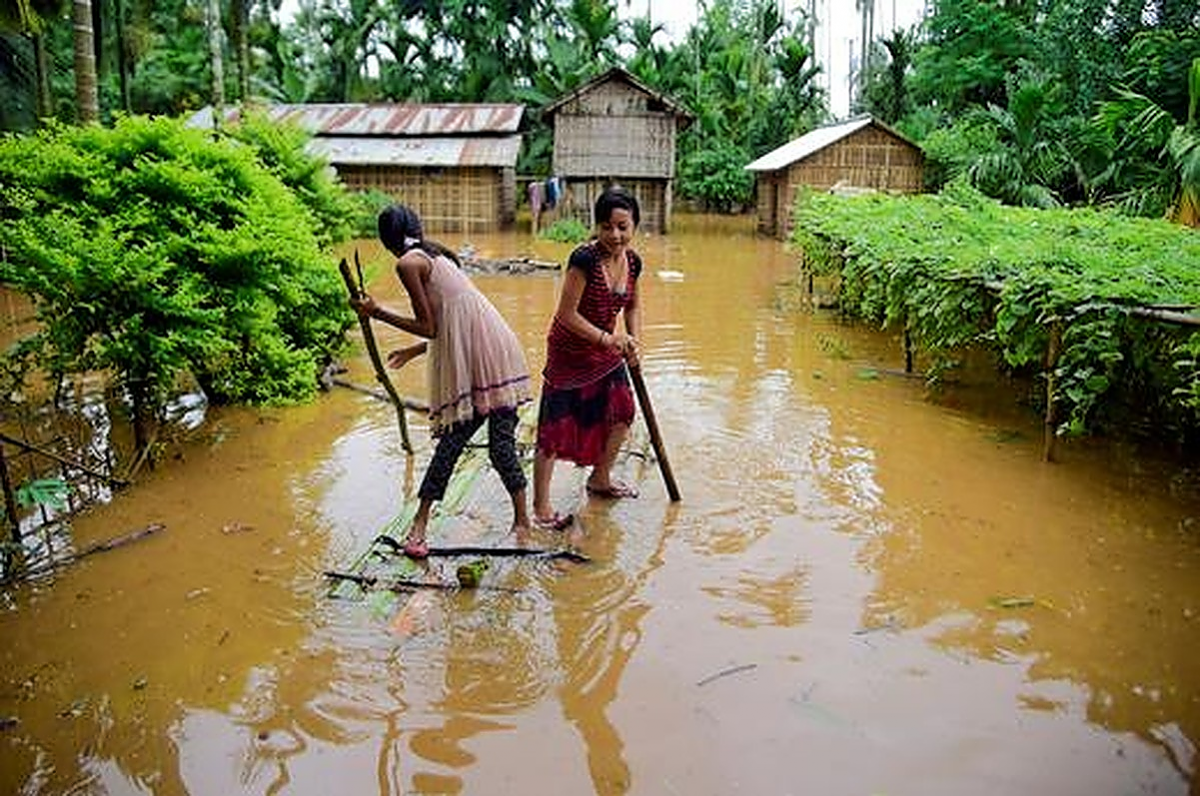 Buffaloed by the Climate in Kolhapur

New Delhi: Raging floodwaters battered Assam and parts of Bihar with the death toll in the two states mounting to 55 on Tuesday, while rain-related incidents claimed 14 lives in Uttar Pradesh.

A red alert was also sounded in Kerala for extremely heavy rains with an India Meteorological Department (IMD) bulletin saying that over 204 mm rains are likely in 24 hours in six districts of the southern state.

In the north, heavy rains continued to lash Punjab and Haryana while the national capital received light showers for a second consecutive day.

At least 33 people have been killed in flash floods in Bihar till Tuesday evening and 25.71 lakh people are affected in 16 districts of the state.

According to officials, unusual torrential rainfall in Nepal and subsequent massive discharge of water in rivers led to flash floods in Bihar where more than one lakh people have been moved to safer areas.

In Assam, the deluge has affected 33 districts of the state and claimed 17 lives. Nature’s fury has hit more than 45 lakh people, officials said.

With over 150 anti-poaching camps in the Kaziranga National Park affected by the floods, the authorities are working round-the-clock to check poaching at the UNESCO world heritage site.

According to the Assam State Disaster Management Authority report, Brahmaputra river and its tributaries are flowing above the danger level in most of the affected districts, including in Guwahati.

The flood situation in Manas National Park and Pobitora Wildlife Sanctuary is also critical as vast stretches in them have been inundated, and animals are moving towards the neighbouring highlands.

Five persons had died earlier in rain-related incidents in Mizoram.

Meanwhile, light rains and a cloud cover kept the mercury in check in the national capital. The Safdarjung Observatory, which provides official figures for the city, reported 29.2 mm of rains till 8:30 am, the maximum in the monsoon season this year.

In neighbouring Uttar Pradesh, 14 people were killed on Tuesday in rain-related incidents, a government release said. The chief minister Yogi Adityanath directed district magistrates concerned to immediately provide Rs 4 lakh to the families of the victims.

Meanwhile, heavy rains continued to lash many parts of Punjab and Haryana. The water level of Ghaggar river in Patiala district was flowing close to the danger mark in the morning, but by the evening, the level reduced, officials said.

“There was localised flooding in some parts, but there is no need to panic,” Patiala deputy commissioner Kumar Amit said.

There were also reports of heavy rains in Bathinda in Punjab and Ambala in Haryana, leading to water-logging in many low-lying areas.

The MeT has further forecast more rains in the two states till Thursday.

Rains in several parts of Himachal Pradesh brought down the day temperatures in the state, with Karsog being the wettest with 70 mm of rainfall.