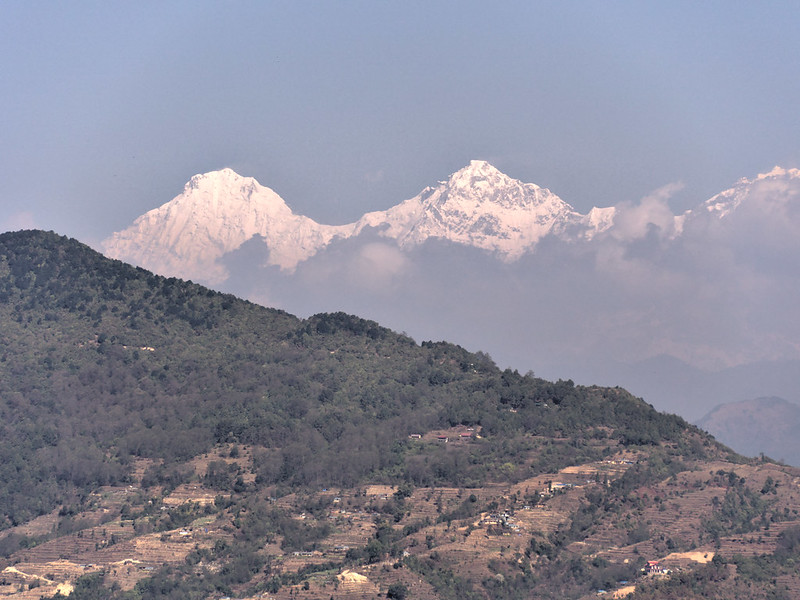 Altitude and ecology are important factors in the ability of people in the Himalayas to adapt to climate change. That is the conclusion reached by three studies on communities in the Indian Himalayas, published over the past year.

Scientists studied communities living at different heights in Himachal Pradesh, Uttarakhand and West Bengal. All found that communities’ capacity to cope with the impacts of climate change is generally low. But two of the three studies identified those who live in the middle altitudes of the Himalayas as the most vulnerable to a changing climate, as high population density puts pressure on already-fragile ecosystems.

In June this year, the Indian government’s Ministry of Earth Sciences published the country’s first climate change assessment report. It states that the Hindu Kush Himalayas (HKH), which span eight countries from Afghanistan in the west to China in the east, warmed by about 1.3 degrees Celsius between 1951 and 2014. Snowfall is declining and glaciers are retreating in several parts of the HKH.

The 50 million people living in the Indian Himalayan region share certain vulnerabilities. “Steep slope and terrain conditions limit the capacity of mountain agriculture systems to withstand even a small degree of disturbance,” wrote the researchers who conducted the study in Himachal Pradesh. They attributed this to “a rapid increase in population in the past few decades which has led to depleting resources, increased stress on critical environmental components like water, land and forest.”

Nakul Chettri is regional programme manager of transboundary landscapes at the International Centre for Integrated Mountain Development (ICIMOD), a regional research institute based in Kathmandu, Nepal. He explained that the vulnerability of a community depends on how exposed it is to a risk, how sensitive it is to the risk and its capacity to adapt to the situation.

He said there are “a few worrying indicators” of the vulnerability of mountain communities to climate change. Temperatures are rising, with warmer winters, and precipitation patterns are changing: rainfall is more intense and over shorter periods. Fruit and flowers are appearing earlier; vegetation normally found at lower altitudes with warmer temperatures is growing higher up the mountains.

The three reports show what this broad trend means for specific mountain communities in three of the 12 Indian states in the Himalayas.

Scientists from the IIT in Kharagpur studied communities in the foothills (less than 1,200 metres above sea level) of West Bengal. Their report, which was published in June, said there is overall “low adaptive capacity” to climate change.

Between July and September 2018, the researchers assessed 384 households in these areas of eastern Himalayas. They looked at four indicators of household vulnerability caused by climate change: income loss, crop loss, housing loss and overall livelihood loss. The findings showed vulnerability across the board.

The families surveyed were poor and earned a living from farming. The report found that every household in this sub-Himalayan region loses a significant amount of crops every year due to heavy rainfall or flooding – despite several adopting flood-resilient varieties.

The region experiences “heavy rainstorms and catastrophic floods”, the authors said, with flash floods due to “unprecedented rainfall” in neighbouring Bhutan. Between 2015 and 2017, cloudbursts stranded over 4.4 million people and inundated over 293,000 hectares of crops and houses.

Smallholder farmers were particularly affected; they lease land from farmers with larger landholdings twice a year: during the monsoon season to grow rice and during winter to grow maize and potatoes. The report noted that the increasing difficulty of farming and limited employment opportunities was causing young men to seek work in cities like Guwahati, Delhi, Bengaluru and Thiruvananthapuram. This has “indirectly pushed the women and the children towards a more vulnerable condition during the climatic disasters especially floods.”

“There is an urgent need to develop physical infrastructure like bridges over rivers, proper roads, housing infrastructure [most houses are built using mud or partially built from concrete], as well as a need to strengthen the existing flood management strategy,” the authors wrote.

Vulnerability across regions in Himachal Pradesh

Another study, published in February this year, assessed farming communities at different altitudes in Himachal Pradesh. The researchers focused on ‘biogeographical’ zones, studying how the distribution of plants and animals varies and how this impacts people’s livelihoods in the western Himalayan state.

They found that “geographical location of zones played a decisive role in distribution of [inherent vulnerability]”, with the ‘Middle Himalayas’ most vulnerable “due to fragile inherent biophysical and socio-economic conditions”.

The scientists, from Jawaharlal Nehru University (JNU) and research organisation The Energy and Resources Institute (TERI) in New Delhi, analysed data from 13,877 villages. They divided the villages into three zones: the ‘Lower Himalayas’ (250-6,444 m above sea level, with sub-tropical temperatures and moderate rainfall), the ‘Middle Himalayas’ (250-6,524 m, ranging from warm temperate to cool temperate, and with moderate rainfall) and the ‘Trans-Himalayan Tibetan Plateau’ (2,289-6,582 m, a cold desert with very low temperatures and little rainfall).

The variations in the type of plants and animals found, which depend on the height, terrain and climate of each zone, give rise to different agricultural practices.

Agriculture is crucial in Himachal Pradesh: 88% of the population has marginal landholdings (of less than one hectare) and is involved in agriculture and horticulture.

The scientists found that the Middle Himalayas are the most vulnerable due to the fragility of the landscape, combined with overcrowding of communities and socio-economic conditions. Communities in the lower zones are more able to adapt as they have better infrastructure and are less crowded. In the higher range the sparse population and lesser dependence on agriculture (people’s incomes mostly come from livestock and tourism) means communities are more able to cope, the report said.

Pawan Joshi, a professor at JNU’s school of environmental sciences and one of the study authors, said, “It is the first study to look specifically at the agricultural or farming community’s inherent vulnerability in different biogeographical zones in the Himalayas,” which would be further aggravated by climate change.

Squeezed middle in the Garhwal Himalayas

A third study explored the social and economic vulnerability of communities living at different altitudes in the Garhwal Himalayas in Uttarakhand. It found that those living at 1,000-2,000 metres above sea level in the mountain ranges of the west Himalayan state are the most vulnerable to climate change.

About 3.9 million people live in the Garhwal Himalayas, about 30% of whom are under-nourished due to poverty and the subsistence economy. With limited employment opportunities, communities at all altitudes are dependent on agriculture.

All the zones are affected by climate change. But the researchers identified the temperate ‘middle’ range as the most vulnerable. Rajiv Pandey, a scientist at the Indian Council of Forestry Research and Education in Dehradun and one of the report’s authors, told The Third Pole that the main reason for this is exposure to extreme weather events such as rainfall, floods, landslides and droughts, which disturb agriculture. High population density also means greater demand for natural resources, putting pressure on the ecosystem.

The researchers found the farmers most sensitive to climate change were those in the ‘high’ zone. They said this was mainly due to heavier soil erosion, caused by erratic rainfall pattern and steep slopes.

Communities living in the ‘very high’ zone were the third-most vulnerable to climate change. The report said they were more exposed than other groups to fluctuations in climate and extreme weather events. However, it added that higher-altitude communities’ livelihoods have improved because of opportunities from tourism and subsidies provided by the government through social schemes, such as cooking gas.

Pandey said that the study of the Garhwal Himalayas had identified hotspots for vulnerability in the mountains of Uttarakhand. “A single package of adaptation measures for climate change across the Himalayas would not be effective,” he said. Rather, communities need customised strategies based on altitude, that integrate natural resources, strengthen farming and consider livelihoods.

By the end of the century, India’s Ministry of Earth Sciences has said the average temperature across the HKH could rise by 5.2 degrees Celsius under the worst-case scenario. This will have huge consequences for the millions of people in the already-stressed mid ranges of the mountains.

Pawan Joshi from JNU said the next step is to identify villages that need immediate adaptation planning. “The findings of this study [on Himachal Pradesh] will aid in better resource management for farming communities in vulnerable zones,” he said.

Joshi pointed out that often development initiatives overlap with adaptation planning and “such ranking of villages will be of great value to policymakers. In fact, such assessment should be done for entire Himalayas for better understanding and application.”

T.V. Padma is a freelance science journalist, who tweets @tvpadma.

This article first appeared on thethirdpole.net. Read the original here.