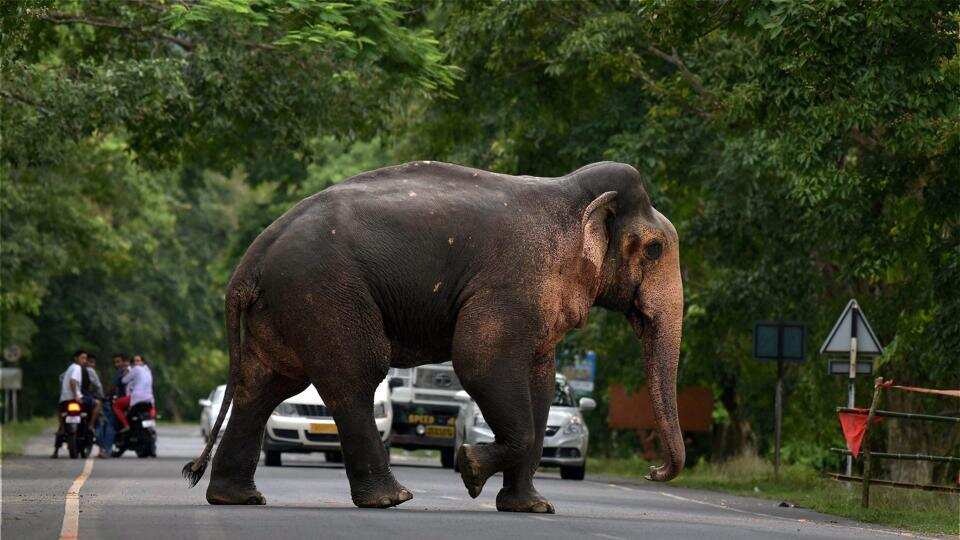 Climate Action: What the Sunrise Movement Can Do Better

Bengaluru: Many of the most common visuals we see of wildlife – that haven’t been captured with camera traps – are set in towns and cities where an animal is walking through a street or highway while people watch from not too far away.

One such video clip that was making rounds recently was of a crocodile wandering in Kogilban, a village in Dandeli, Karnataka.

Many, including some wildlife conservationists, shared the video on social media, touting it as a sign of coexistence between people and wildlife in India. But the entire clip reveals both intolerance and fear. At first, the villagers seem to be fascinated by an adult crocodile walking slowly through their streets, and tolerate its presence. Later, however, they begin shooing it away and pelting stones, even while descending into a panic.

“We went [to Kogilban], spoke to the villagers and stopped them from pelting stones,” said Rahul Bavaji, honorary wildlife warden of the Kali Tiger Reserve in Karnataka. “Raising awareness” of wildlife conservation and conflict with crocodiles “among people is important.” He added that while conflict with crocodiles is not a major issue in Dandeli today, “it might happen in the future because breeding and nesting grounds are getting destroyed by tourism-related construction activities,” which push crocodiles out of their habitat.

Some local practices in Dandeli also demand attention. Tourism operators and tourists in the region are known to feed crocodiles – a practice that goes against conservation recommendations because of fallouts like unhealthy dependence on people, conflict and increased susceptibility to poaching. In one instance, when a forest official objected to such feeding, tourists killed him.

In states like Odisha, with big crocodile populations, conflict is a serious issue. Last year alone, six people lost their lives to crocodile attacks. This is why it would be premature to assume humans and animals are coexisting because they’re in the same space – in the absence of explicit evidence.

Another case in which both the conservation community and the people at large assume coexistence is when leopards are found wandering in concrete jungles. Their narratives equate the presence of leopards in such areas to their supposedly unique adaptive capabilities, and then to human-leopard coexistence. But this is not the full picture.

For example, the extent of natural habitats like rocky outcrops and forests has been slowly receding in Karnataka, pushing leopards into “sub-optimal habitats”, Sanjay Gubbi, a wildlife biologist and conservationist in the state, said. ‘Suboptimal habitats’ means sugarcane and arecanut plantations and maize fields, and prey like livestock. He’s saying that leopards are forced into landscapes that they probably wouldn’t naturally pick to be in.

The number of leopards captured and translocated within India has been steadily climbing since 2011 – driven largely by livestock depredation. A decade ago, 32 leopards were captured and 21 translocated. These numbers rose to 73 and 55 in 2016. This trend suggests that human-leopard encounters have been becoming more common in Karnataka – especially in Tumkur, Mysore, Hasan, Bellary, Mandya, Udupi, Koppal and Ramanagara.

Also read: Monitor Lizards Are Harmless – as Are Most Wild Animals We Share Space With

Then there are threats to leopards in the form of snares, which people use to trap wild herbivores.

Gubbi coauthored a paper published in June 2021, showing that more humans in an area (in Karnataka) typically meant more snaring incidents, and thus more deaths – especially as the former was more than 225 people per sq. km. “The highest number of snares occur closest to human habitation,” Gubbi said.

Many of these leopard landscapes in Karnataka are mosaics of agricultural fields, forests and rocky outcrops. And all the evidence we have suggests leopards also need forests to survive; just buildings and roads all the time won’t do.

Like crocodiles and leopards, elephants are also particularly tough1 to live with.

As with shrinking natural habitats forcing leopards into sub-optimal spaces, like agricultural fields and villages, elephants have been pushed out of forests in Chhattisgarh, Jharkhand and West Bengal.

“Only about 30% of elephant habitat in India is within protected areas. In the remaining 70% of their range, elephants share space with people,” said Varun R. Goswami, co-founder and senior scientist at Conservation Initiatives, an NGO in northeast India.

Goswami said some species, like elephants and monkeys, enjoy a certain “conservation ethos” in India rooted in religious and cultural sentiments. So people are generally sympathetic to their plight. But, he continued, this ethos isn’t pronounced enough to prevent animals and people from dying.

The proximate cause of human-elephant conflict across the elephants’ range in India is that they forage and raid crops. “Deaths and injuries often happen when people are chasing elephants, usually away from their fields,” Goswami said.

And the distal cause? Again, habitat loss and fragmentation.

This has been true in Karnataka, too. Gubbi said that in Hassan, a city some 200 km west of Bengaluru, thanks to sign boards and SMS alerts, casualties among humans have fallen” – but “elephants continue to be killed, captured and translocated”.

According to one report, 61 people have been killed in encounters with elephants since 2001 in Hassan alone. People often respond to these tragedies with retaliatory gunfire, poisoning and by installing (illegal) electrical fences around their fields. The residents of some villages in Hassan have also protested to demand the giants be relocated.

Also read: No Sense Of Place: To Learn the Meaning of Life From a Four-Legged Therapist

Elephants are a wide-ranging species that require a lot of space and resources to meet their ecological needs. “This is just how biology works for a 3,000-kg animal,” Goswami said. “We cannot pocket them inside protected areas. So if we want to sustain our Asian elephant population – the largest in Asia – we have to find imaginative ways to facilitate [space-sharing] between people and elephants, keeping in mind landscape-level thinking to address conflicts.”

It would be ideal for people and animals to coexist. The bulk of India’s wildlife lives outside the 5% of land area that the law protects for them, and routinely interacts with people. From the people’s point of view, these landscapes have been put to multiple uses, including agriculture and agro-pastoralism.