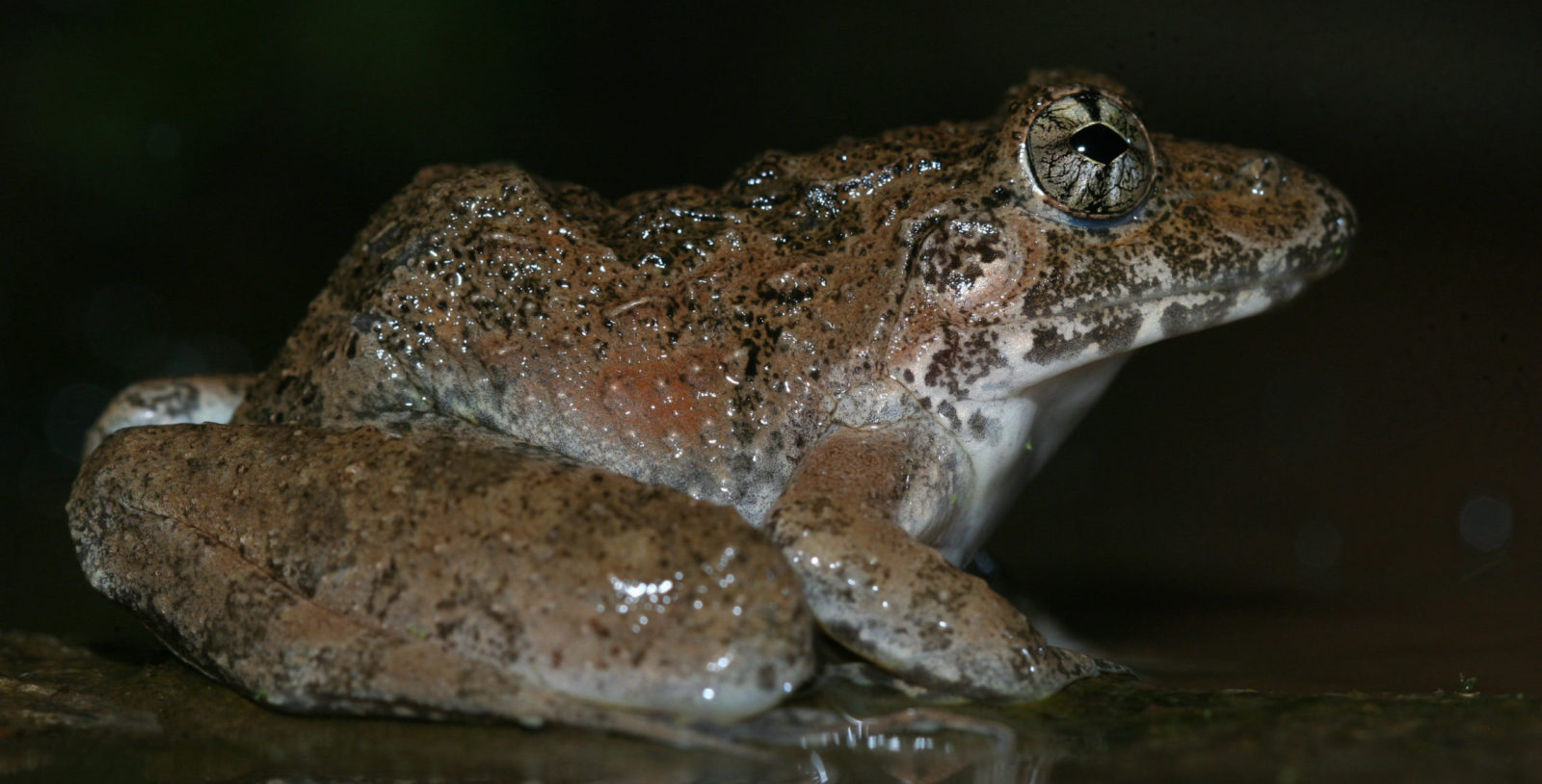 Over the last decade alone, more than 100 frog species new to science have been discovered in India. One of them is the Kalinga cricket frog (Minervarya kalinga), a plain-looking brown amphibian that scientists discovered two years ago. What was special was that they had spotted it in the northern tracts of the Eastern Ghats, a hill range that has not seen as many frog discoveries as its western counterpart has.

Now the frog has popped up in the Western Ghats too, in Karnataka’s Uttara Kannada district. That’s more than 1,000 kilometres away from its eastern range. This proves that the Kalinga cricket frog may indeed be distributed across a larger area than what earlier, possibly incomplete surveys show. Since these frogs are also slightly larger than their eastern relatives, this could signify a new and morphologically distinct ‘population’ of frogs, postulate the scientists who made the discovery.

The cricket frogs of Asia

Size, colour and shape: looks, in general, are one of the many means to identify a frog. Especially so in the case of Asia’s cricket frogs. Cricket frogs (genus Fejervarya/ Minervarya) are found across large parts of Asia, including India. They were initially confused for pond frogs and placed in the genus Rana. A genus is a unit of classification containing organisms that share not only some common traits but also a common ancestor; it can contain several species.

In 1915, a naturalist found that some of these frogs in east India, Bangladesh and adjoining Asian countries, had two distinct lines running down their pale tummies; these were given their own genus, Fejervarya. In 2001, scientists found that some small Fejervarya-like frogs in Kerala and Karnataka looked different: they sported stark white upper lips, and a small gland called the rictal gland near their mouths apart from the fejervaryan lines on their bellies. So this frog species (species sahyadris) was assigned a new genus, Minervarya. With confusions surrounding all these frogs’ morphologies, however, another team grouped all south Asian fejeraryans (including Indian species) into another new genus, Zakerana. But confusions still prevailed.

A team (including K.P. Dinesh, currently with the Zoological Survey of India) then used basic genetic data to re-classify and re-name the genera Minervarya and Zakerana as Fejervaryas in 2015. In 2018, another team used several genes of fejervaryan frogs across 12 Asian countries and re-classified all southeast Asian frogs under the genus Fejervarya (including three species in east India that occur here as part of their Indo-China range), and those in south Asia into the genus Minervarya (all other Indian fejervarya-like frogs now fall in this category).

Amidst this fantastical taxonomic melee, scientists have been discovering new species of Minervarya across India. In 2018, a team including Dinesh stumbled across one from the Eastern Ghats, a hill range that runs roughly parallel to India’s east coast. Genetic studies revealed it to be a new species, the Kalinga cricket frog (now, Minervarya kalinga). The frog “is known with certainty” from many parts of Odisha including the Mahendragiri Hills, as well as from some areas in Andhra Pradesh, the team found.

But was it found elsewhere?

Part of that answer has surfaced now. When researcher Amit Hegde (a doctoral student at the Karnatak University), Dinesh and Girish Kadadevaru (associate professor at Karnatak University) surveyed for amphibians in the soppina bettasand surrounding agro-forests of Karnataka’s Uttara Kannada district, they came across a “Fejervarya-like” frog. Soppina bettas are ‘foliage’ forests – forest patches assigned to areca nut farmers to extract foliage, which is used as manure for areca palms.

“It looked different from the Fejervarya/ Minervarya frogs of the Western Ghats,” recalled Hegde.

While this not only extends the distribution of the species to the Western Ghats of India, the Kalinga cricket frogs here are a “morphologically variable and distinct population” of the species, argue the authors in their study published in the journal Zootaxa recently.

This morphological variation could signify “morphological phenotypic plasticity” – the phenomenon where an organism evolves differences in morphology in response to unique local environments, said Hegde.

The title of their research study (“Phenotypic divergence in large sized cricket frog species that crossed the geographical barriers within peninsular India”) also hints at a biogeographical inference, though this is not clarified further in the study.

However, the paper provides only a range extension of the species, commented amphibian biologist K.S. Seshadri, who was not involved in the study. The study does not provide evidence of population-level effects as no microsatellite data are used and no haplotypes are evident from the phylogenetic analysis, he wrote in an email to Mongabay-India. Moreover, it would be premature to allude the observed morphological variation to plasticity based on the study’s small sample size (two individuals for the genetic data and a simple ordination plot such as Principal Component Analysis of morphology using six samples), he added.

Findings like this range extension also “place the impetus on rigorous science”, wrote Seshadri. “These days, there is incredible evidence emphasizing the need for an integrative taxonomic approach that uses multiple, independent lines of evidence such as morphology, genetic data and acoustics.”

Providing frog call comparisons and examining multiple genes in the current study could have made a huge difference, he suggested.

Cricket frogs appear to be lodged in a much-contested taxonomic group. What do the confusing Minervarya-Fejervarya debates mean for these little frogs and their conservation?

“It can have huge implications, especially in the present world where science is not valued as much as it should be,” commented Seshadri. “Policymakers or managers could find this confusion infuriating and this may hinder the process of obtaining permits. Or a frog enthusiast may simply lose heart because of this confusion and may not be inclined to delve deep into the intellectual aspects of taxonomy. From a conservation standpoint, we have lost half the battle if we do not know what species is found where. So, our job as scientists is to make our science free of needless confusion or provide justification to the stands we take.”

The Wire Science@TheWireScience
3 Following 15.4K Followers
There is currently zero visibility of the Centre’s plans for vaccine procurement, even if it palmed off this respon… https://t.co/i1HEgm58Tv
11 hours ago
1 3
How our ancestors treated and mourned the dead can offer crucial clues, helping to reveal when we first developed t… https://t.co/nIjjB5fdlf
12 hours ago
2
The lands of Seppakkam once had rice fields, salt pans, fresh air, mangroves and clean rivers with fish aplenty. Th… https://t.co/Uw1BItkwlU
13 hours ago
2
In conversation with Karan Thapar, Professor Ashish Jha has said the Kumbh Mela "shahi snans", when two and three m… https://t.co/6BieQbnksr
14 hours ago
4
Big Pharma turns up once a public institute has completed the risky part, exploring the possibility of developing n… https://t.co/EuJ27p0Vzt
15 hours ago
“They have mild symptoms and they are eating well and they are fine,” Rakesh Mishra said. https://t.co/f1UT9sLcqe
16 hours ago
1 1
In a major shot in the arm for the Pfizer-BioNTech COVID-19 vaccine, researchers have reported in two studies that… https://t.co/sAYVSsy0Eg
17 hours ago
1
Ill-equipped hospitals, staff shortages and long journeys to dedicated COVID-19 wards are making it harder for vill… https://t.co/mVxL8vbdtL
18 hours ago
1
Do monopoly-protected, US-based Big Pharma endeavours have monopolies on finding the cures for many of the world’s… https://t.co/aSywMcxtVp
19 hours ago
1 1
President Joe Biden on Wednesday threw his support behind waiving intellectual property rights for COVID-19 vaccine… https://t.co/4hxFWH6sAz
20 hours ago
3
On May 6, India reported more than 400,000 coronavirus infections over the last 24 hours, while deaths rose by a re… https://t.co/iu0A7a5FgK
20 hours ago
1 3
The problem, according to Anvisa, is that doses of the Sputnik V vaccine may contain adenoviruses that are able to… https://t.co/1ykUG1cSIf
22 hours ago
1
A study led by Centre for Cellular and Molecular Biology, Hyderabad scientists states that there is no separate spe… https://t.co/uV0xemWT7G
23 hours ago
2
Oxygen crisis deepened in certain parts of Karnataka on Tuesday, with the deaths of seven COVID patients in Kalabur… https://t.co/KXxGpchp2i
1 day ago
1 2
The striking disparity between COVID-19 advice and treatment is attributable primarily to India’s sluggish treatmen… https://t.co/KLMRs8AgUM
1 day ago
2 2
Contact us