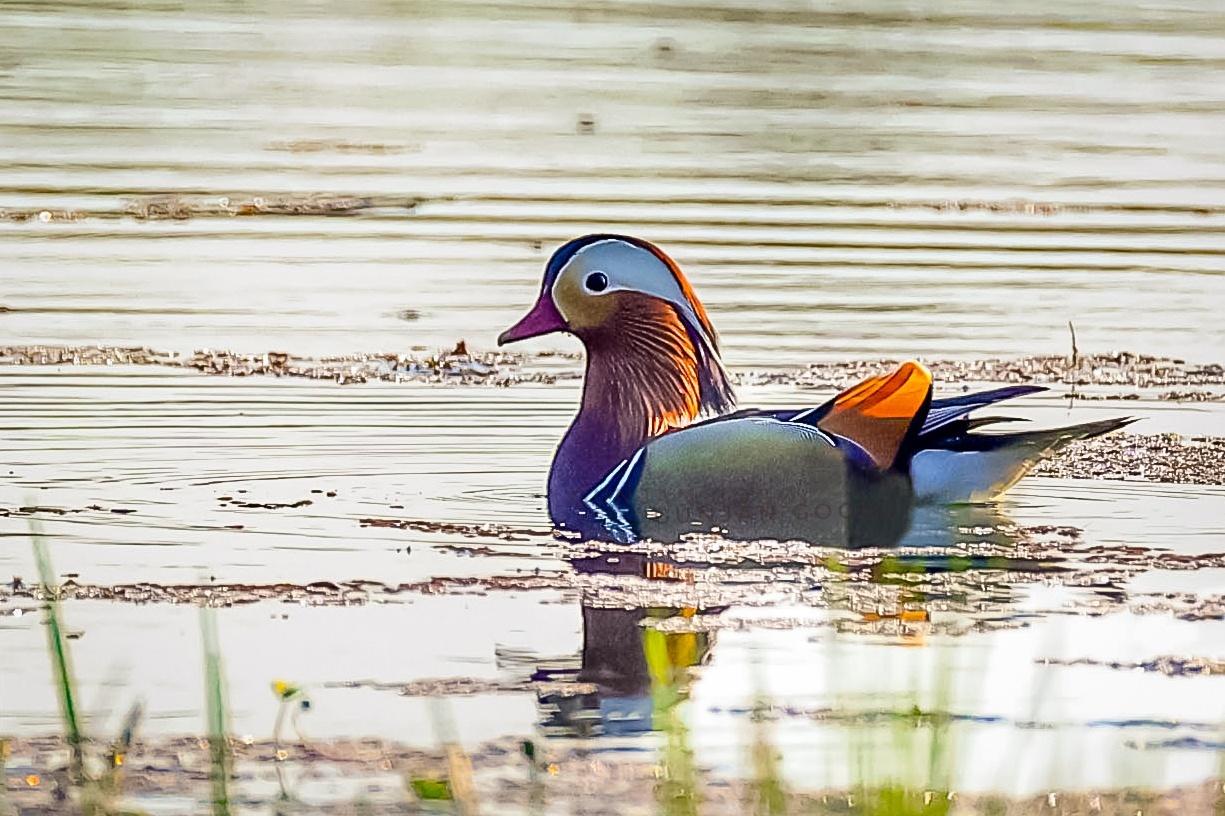 Chandigarh: On February 8, Madhab Gogoi, a bird-watching guide in Maguri-Motapung beel (wetland) in Tinsukia district, Assam, was simply alert as usual – and that’s how he spotted the rare, and magnificent, Mandarin duck. His images of this vibrant bird have since gone viral on the internet.

“I was on my regular visit to the Maguri-Motapung beel to check out the birds in the surroundings when I happened to notice this very colourful duck floating on the surface,” Gogoi told The Wire Science. “Upon a closer look, I realised that it was the rare Mandarin duck. I could not believe my eyes, and it took me some time to register” its presence.

Once he was able to make sure, Gogoi rang a friend of his, a photographer, who rushed to the site and captured the images.

According to the eBird database, a male Mandarin duck (Aix galericulata) is “very ornate with big orangey ‘sail fins’ on the back, streaked orangey cheeks and a small red bill with a whitish tip”. The female has “narrow white spectacles on a shaggy grey head, bold pale dappled spots along flanks and a pale bill tip.”

Gogoi also said he had informed all avid birders and wildlife photographers he knew in the area, and the place was soon packed with people keen to get their own photographs. “The bird was floating calmly, doing its usual stuff, eating and resting at one particular spot for three days, oblivious of the curious eyes at some distance.”

It proved to be a short-lived spectacle, however: “the bird was last seen on the evening of February 10 and flew away sometime in the night,” Gogoi said.

Ornithologist Anwaruddin Choudhury, a former joint secretary of the forest department and a member of the state wildlife advisory board, said that a Mandarin duck was last spotted on the Dibru river in Tinsukia in 1902.

“It was a British official who shot down one Mandarin duck in a flock of five to six birds in Dibru river,” Choudhury said. “He would display shot birds in his museum. This is the last record of the bird we have in the same area.”

According to him, bird-watchers had also spotted a Mandarin duck a handful of times in the Loktak lake in Manipur in 2013 and in Saatvoini beel in Assam’s Manas National Park in 2014.

Choudhury said the Mandarin duck isn’t listed as being ‘endangered’ or ‘vulnerable’ on the IUCN Red List, so there was no need to be concerned overmuch about their populations.

“It seems the bird strayed from its regular migratory bath,” he added. “They breed in Russia, Korea, Japan and the northeastern parts of China – as the name Mandarin also suggests. The species is also found in Western Europe and the US.”

Sanjay Sondhi, a bird and butterfly expert, agreed that it isn’t “uncommon for migratory birds to stray from their flight routes. For example, ducks like common goldeneyes and Baer’s pochards have been spotted a few times in the Asan Conservation Reserve in Uttarakhand.”

However, Sondhi also said there haven’t been any studies on how these birds rejoin their flocks and reach their originally intended destination.

Conservationists like Gogoi are also heartened by the fact that distressing images like that of the Gangetic dolphin charred by fire from the Baghjan blowout in May 2020 have been replaced by something as refreshing as the Mandarin duck. To him, it’s a sign of nature finding a way to restore itself, and which should be helped along.

“The recurrent floods during the monsoon season cleared a lot of the deposited oil in the Maguri-Motapung beel, although there is still some oil embedded deep in the soil,” Gogoi said.” This is the reason many species like hornbills and butterflies are no longer seen in the area. The local farmers are also not able to cultivate their land.”

A number of environmentalists and wildlife lovers from across the country have protested Oil India Limited’s plans in the area. Even as the Baghjan blowout fire raged, for example, the company announced its intention to drill for oil at the edge of the Dibru Saikhowa National Park, which is just north of Tinsukia.

The wetland and the national park form a joint ecosystem that houses over 300 avian species, including eight listed as being ‘threatened’ on the IUCN Red List.