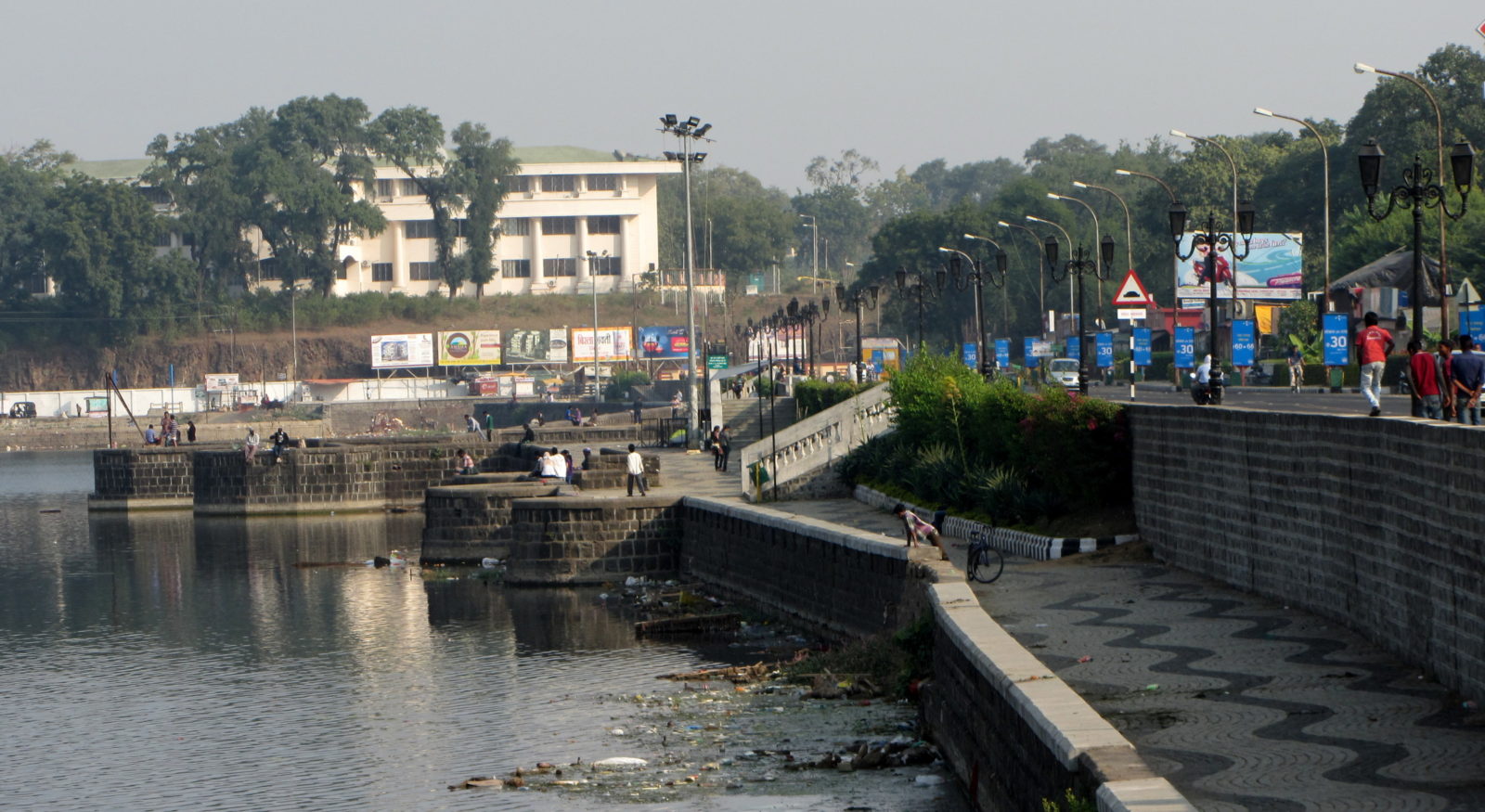 COVID-19: Our Obsession with Numbers Is Misleading Us

The wider portion of the Nag river about where it leaves the city limits. The current STP is located at a place called Bhandewadi near here. Photo: Nivedita Khandekar.

This is the first story in a two-part series. Read the second here.

Nagpur: As temperature soars, desert coolers and new-age plastic-body branded coolers make an appearance everywhere across the city sending up the demand for water. This year has been an exception as it has rained every few days. Otherwise, by April end and May, the mercury steadily hovers around 45 degrees Celsius plus for days and weeks; and in May, sometimes during a critical heatwave, touches almost 48 or 49 degrees Celsius.

The Nagpur Municipal Corporation (NMC) draws water from irrigation reservoirs. Nagpur gets water from Navegaon Khairi dam on Pench river and from Kanhan River. Most of the year, Nagpur needs 640 million litres per day (MLD) water. April till June, the demand rises to 720 MLD approximately.

Nagpur city’s geography is intricately entwined with the surrounding areas of the district as it shares the same catchment for rains and hence for water. But, there are two separate authorities planning and executing development and welfare measures for the city – the Nagpur Municipal Corporation (NMC) and the Nagpur Metropolitan Area (NMA), which comprises NMC Area, Cantonment Board of Kamthi, two Municipal towns of Kamthi and Kalmeshwar and 262 surrounding villages in the district.

Traditionally, the rainfall in the district has been well distributed and the variation in the annual rainfall from year to year has not been large. The average annual rainfall is 1161.54 mm, of which almost 90% is received during the south-west monsoon season with the maximum in July.

These four months have seen a lot of variation in precipitation in recent years. As per India Meteorological Department’s (IMD) data for last five years, June saw negative departure in four out of seven years; July saw two out of seven years get scanty rainfall; three years in August and all seven years have seen less than normal rainfall in varying degrees in September.

Rainfall for Nagpur district during last few years: (in mm)

Source: IMD R/F is rainfall in mm. % Dep is % departure from the long period average

Given the variations in precipitation patterns in recent years, is Nagpur prepared to deal with climate uncertainties and a possible water shortage in future?

In 2019, when the rains went missing till late July, forcing the NMC to supply drinking water every alternate day, it had prompted the civic body to take certain actions. The water resources department had written to all major bulk water consumers – airport, railway station, hotels and big hospitals – to install rainwater harvesting (RWH) systems. The NMC had also identified 54 major water consumers who use more than 1 lakh litres per day, including all big educational institutions that have residential campuses – and asked them to install sewage treatment plants to re-use water before next summer.

Also Read: The Four Ways in Which India’s Water Blessings Are Turning Into Disasters

And of course, the NMC started with RWH on its own buildings and 130 gardens across the city. In the last year, NMC was able to install RWH units at three of its properties and also offered wastewater from STPs for gardening.

A November 2016 study by the India Meteorology Department’s Pune office that calculated the rainwater harvesting potential for various locations across Maharashtra, showed that Nagpur had fairly high potential. Following are the tables from the study.

In layperson’s language, it means that individual houses can harvest so much rainwater that it will fulfil almost half year’s drinking water requirement.

Pradyumna Sahastrabhojani, an architect, environmental activist and proponent of the erstwhile Vidarbha Nature and Human Science Centre, said, what is needed is a two-way approach – top downwards and grassroot upwards. For instance, his group works for increasing awareness about RWH among the builder community and also advocates at source, de-centralised sewage treatment, even for smaller plots and buildings. “But the awareness is just so slowly increasing, and it is more to do with commercial avenues and less to do with social responsibility.”

“We need massive awareness among people to not postpone it (RWH) till the next calamity,” he said.

Agreed Sonali Adawatkar and her husband Aprup Adawatkar, who run Paryawaran Pratham, an NGO that works for spreading awareness on environmental issues since 2011. One of their members conducts public lectures for Rotary, Lions Club, etc. on RWH. “But there is such a poor response. The first question people ask is, ‘How much will it cost?’ They don’t mind spending lakhs or even crores of rupees on building their houses but are reluctant to spend an additional few thousand on RWH,” said Sonali.

Aprup added, “What the civic body also needs to do is to not allow any big infrastructure project to use potable water and make it compulsory for them to always go for recycled water after primary or secondary treatment.”

Apart from the water it gets from outside reservoirs, there are 750 wells earmarked by the Corporation for its use. Of those, almost 250-300 have mini-water supply systems too and water from these wells is supplied in summer for non-drinking purposes. Then, there are several handpumps too.

Nagpur has had a telescopic tariff that is consumption-based. So bigger housing societies use borewell or dug well for non-potable purposes and save on water bills. Dug wells are a common feature even today across the city. Majority of the areas in Nagpur get tap water from treated sources for drinking while approximately 15% houses use wells, handpumps and tube wells etc. for all non-potable purposes.

City’s aquifers are well fed by as many as 11 big and small lakes within the municipal limits, almost all of them of 18th century vintage. Of these, the largest – the Gorewada lake –receives water from the two main river sources and, after treatment, it is distributed to consumers. But very rarely, Gorewada’s own water is touched, it is always kept as reserved storage. Year 2019 was an exception when the delayed rains in the catchment mean no water in the remote reservoirs, resulting in an almost dry Gorewada lake after more than 100 years.

Over the decades, thanks to urbanization, slowly these water bodies have either shrunk in size or encroached. These lakes, of course, need to be revived, but given the topography, even new lakes can be constructed in the open spaces that are vulnerable to further occupation, both legal and illegal. Builders and even the government/local bodies have been steadily eating those out bit by bit in the name of development of infrastructure. Sahastrabhojani suggests if New York can have and maintain Central Park bang in the middle of it, why can’t Nagpur have more lakes?

Almost a decade later, as the number of households has gone up with surface water availability remaining almost the same, lakes have an important role in groundwater recharge. With 31.19% development of groundwater, the Central Groundwater Board has put Nagpur in ‘safe’ zone as yet and advocated use of either dug wells or dug-cum-borewells (DCB).

But it has a word of caution too. Mentioning that the long-term rainfall data analyses of few talukas in the Nagpur district (including Nagpur urban and rural areas) indicated that these talukas had faced medium drought conditions in 13 to 20 % of the years.

This is the first story in a two-part series. Read the second here.

This report was possible due to the WaterAid India’s Media Fellowship ‘WASH Matters 2019’ on the theme of ‘Urban Water’.