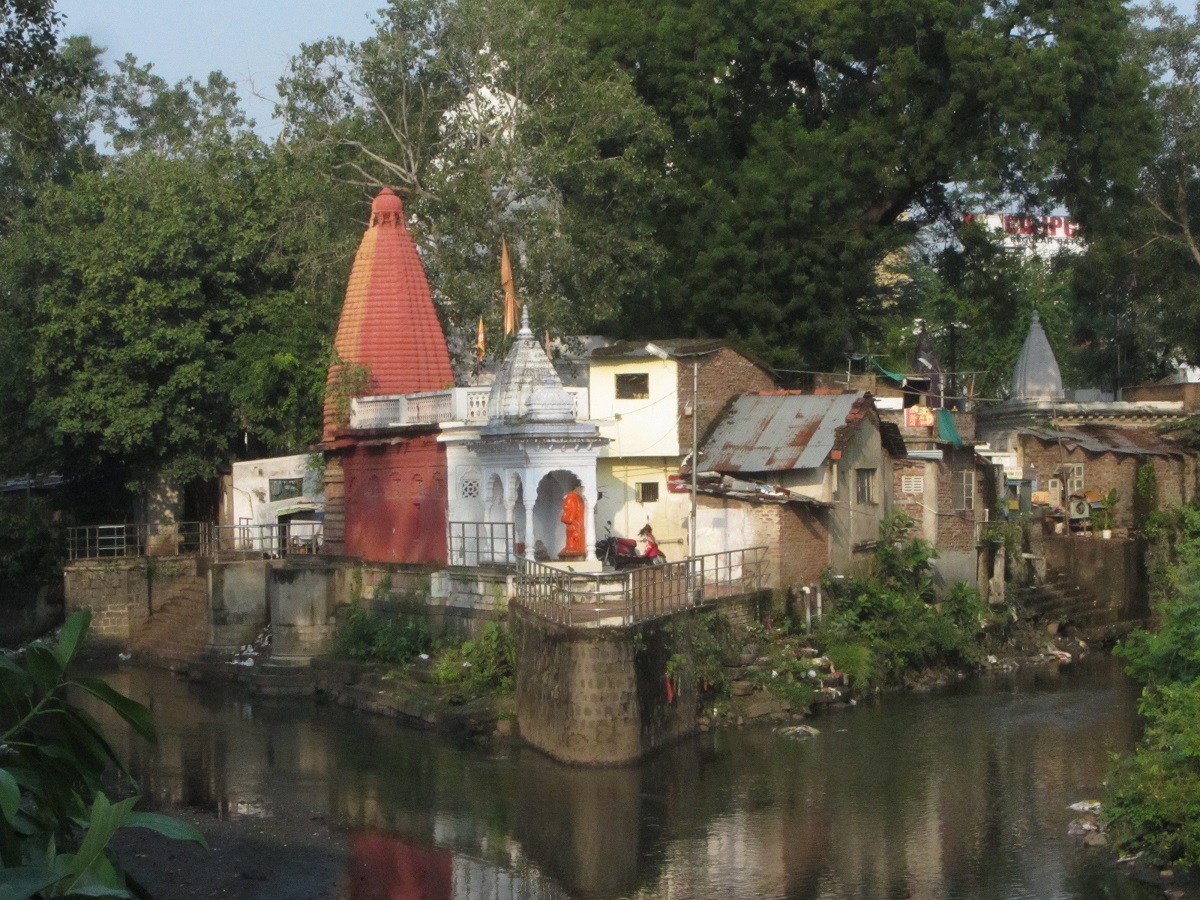 For India’s Wildlife, the Lockdown Isn’t the Good News Many Think It Is

Featured image: Sangam, the meeting point of Nag river and another stream that originates at another lake, is where one of the STPs under the latest scheme is to be built. Photo: Nivedita Khandekar.

This is the second story in a two-part series. Read the first here.

Nagpur: April 2020 finally saw the long-pending project for the rejuvenation of the Nag Nadi, originally conceived in 2008, get a go ahead.

Snaking from Nagpur’s west to east, the water quality of the slender Nag river, which lends its name to the city – Maharashtra’s second capital and now included in the Centre’s Smart City Mission – has been ruined due to excessive dumping of untreated sewage for more than four decades now. Pili Nadi, another river within the municipal limits, too bears the same fate.

At an estimated cost of Rs 2,434 crore, of which the Nagpur Municipal Corporation (NMC) is to raise 15% funding and rest to come from the Japan International Cooperation Agency (JICA), three small sewage treatment plants (STPs) are planned on the Nag river, while the Pili river will have two. The combined treatment capacities of these plants will be 48 MLDs and 43 MLDs respectively. The project also plans to divert over 100 small streams that empty into the two rivers to the main STP and laying of 1,362 km of sewage lines as part of the comprehensive network.

Also Read: Can Cities Like Nagpur Continue to Be Lucky With Climate Change?

If the river carries clearer water, it will automatically help aquifers recharge better. It will also reduce the load on the main STP at the eastern fringe of the city, a few kilometres ahead of the Nag river’s sangam with Kanhan river.

The city generates around 425-430 MLD of wastewater, which is mostly carried by the Nag Nadi and Pili Nadi. Currently, the NMC has only one wastewater treatment plant, with a capacity of 100 MLD, which does not function at full capacity.

Rapid urbanization around Nagpur meant increasing population and consequently an increase in the demand for potable water. On the other hand, new power plants near the city too raised the demand for water.

In order to cater to both these demands, the two authorities planning and executing development and welfare measures for the city – NMC and the Nagpur Metropolitan Area (NMA), which includes the NMC area along with other urban areas of the district, decided to swap water.

Raw water sent in bulk to the industry that is outside the municipal limits but under the NMA is to be diverted to water treatment plants for the city, thus making more potable water available. In turn, the recycled water from the city is being diverted to the industry.

The water reuse project, which came into operation in 2015, reuses municipal treated wastewater from Nagpur for cooling purposes in the power plants at Koradi, Khaparkheda and Mauda.

Pinto Zalke, chairman of the Water Works Committee of the NMC, said the last two-three years have been a learning experience vis-à-vis water management. But 2019 was indeed a wake-up call. It was after several decades that the NMC supplied water on alternate days in mid-July, when rains were delayed until late July in Nagpur and Chhindwara districts, the catchment areas for Nagpur’s rivers.

The NMC, he said, is advocating for rainwater harvesting on the one hand, but also working to create additional storage capacity in view of the long-term requirement.

A new dam is proposed at Rohana on the Kanhan river, where it intersects with the Pench river. “It will be a storage dam from where water will be lifted. Except during the summer, the Kanhan river has ample water during the rest of the year which just flows into the Pench and onward to Wainganga. So, we have decided to tap that,” Zalke said.

There is another barrage planned at the Kanhan Kolar Sangam, which will store 100 MLD, but this project failed to take off when elections to the assembly were declared and the model code of conduct came into force in September 2019.

The city has 11 big and small lakes that have recharged groundwater, in turn, helping scores of dug wells and bore wells. So, given the fact that the city still continues to get ample rainfall, albeit erratic, why can’t the NMC create more surface water storage to catch rain where it falls within the city?

Zalke blamed the geological topography, saying it allows very little percolation. But he admitted that the lakes in the city have been neglected, encroached and some destroyed; and “now we are thinking of reviving these water bodies.”

Nagpur has seen erratic precipitation in recent times. And the years that have seen scanty rainfall are especially troublesome when it comes to supply. But it is not restricted to only availability of water but also quality.

Referring to his 2018 presentation ‘Effect of Monsoon rainfall on Drinking Water treatment plant – water quality assessment & health impact’, Dr Pawan Kumar Labhasetwar, senior principle scientist and head, water technology and management division of the NEERI, Nagpur, pointed out that scanty rainfall caused an increase in algae in river water and how water quality, supply and sanitation are in peril under due to climate change.

Algae is difficult to coagulate and flocculate, it escapes even rapid sand filters (which basically means, the municipal water treatment plants do not have a system to remove algae) and it reaches the consumers, who complain about the colour of the water. “There are many types of algae. One of them is sino-bacteria. Some years ago, there was a fish kill in Ambazari lake (one of the 11 lakes), which was due to sino-bacteria,” Dr Labhasetwar said.

In such conditions, when erratic rainfall and extreme weather events would be the norm in days to come, experts have pointed out that the civic authorities are planning only to meet the water demand for the increased population with capacity augmentation but have not considered the impact of climate change. They say in all likelihood, there will be increased demand for water but a decrease in supply.

In their 2015 paper ‘Climate Change and Its Impact on Nagpur’s Water Supply’, Shravankumar S.M. and Dr A.D. Vasudeo from the National Institute of Technology, Nagpur, have warned that “though the city is cradled among vast resources, it will be soon dwindled if prudential measures are not taken.”

“There is no approach to include the factors affecting due to change in climate, for instance, it is common for cities to review past trends in order to anticipate heat waves and droughts and to develop plans to address spikes in electrical demand or in reservoir depletion. The sustainability of urban water management systems, designed to handle the varying and unpredictable conditions, can be achieved through flexible and decentralized options in the water distribution system,” the duo pointed out.

Among the solutions they suggested were decentralising treatment to reduce operation and maintenance costs, using green and sustainable methods and using energy and land wisely. The duo also advised that conventional pollutants should be reduced and that contamination and health risks associated with wastewater should be mitigated.

Many of these measures are also mentioned as part of the Smart City Mission of the Central government.

Who will bell the cat?

In 2019, when Nagpur was on the brink of running out of water stored in its reservoirs due to lack of rains till late-July, data collected by the NMC’s property tax department showed that only 681 of the approximate 6 lakh properties – both residential and government – had rainwater harvesting system.

This is despite the NMC offering a 5% discount in property tax for setting up either a rooftop solar power generation system or rainwater harvesting and vermicompost. If people have taken more than two measures, 10% discount is offered.

So why aren’t people taking up this incentive?

NMC’s water works department has not been proactive either. Unlike several other civic bodies across India, it neither offers any rebates in water bills if the property has a rainwater harvesting facility, nor any punitive charges for not having one.

“We are yet to decide who will bell the cat,” admitted Shweta Banerjee, head of the water works department.

So, is Nagpur indeed a smart city?

This is the second story in a two-part series. Read the first here.

This report was possible due to the WaterAid India’s Media Fellowship ‘WASH Matters 2019’ on the theme of ‘Urban Water’.