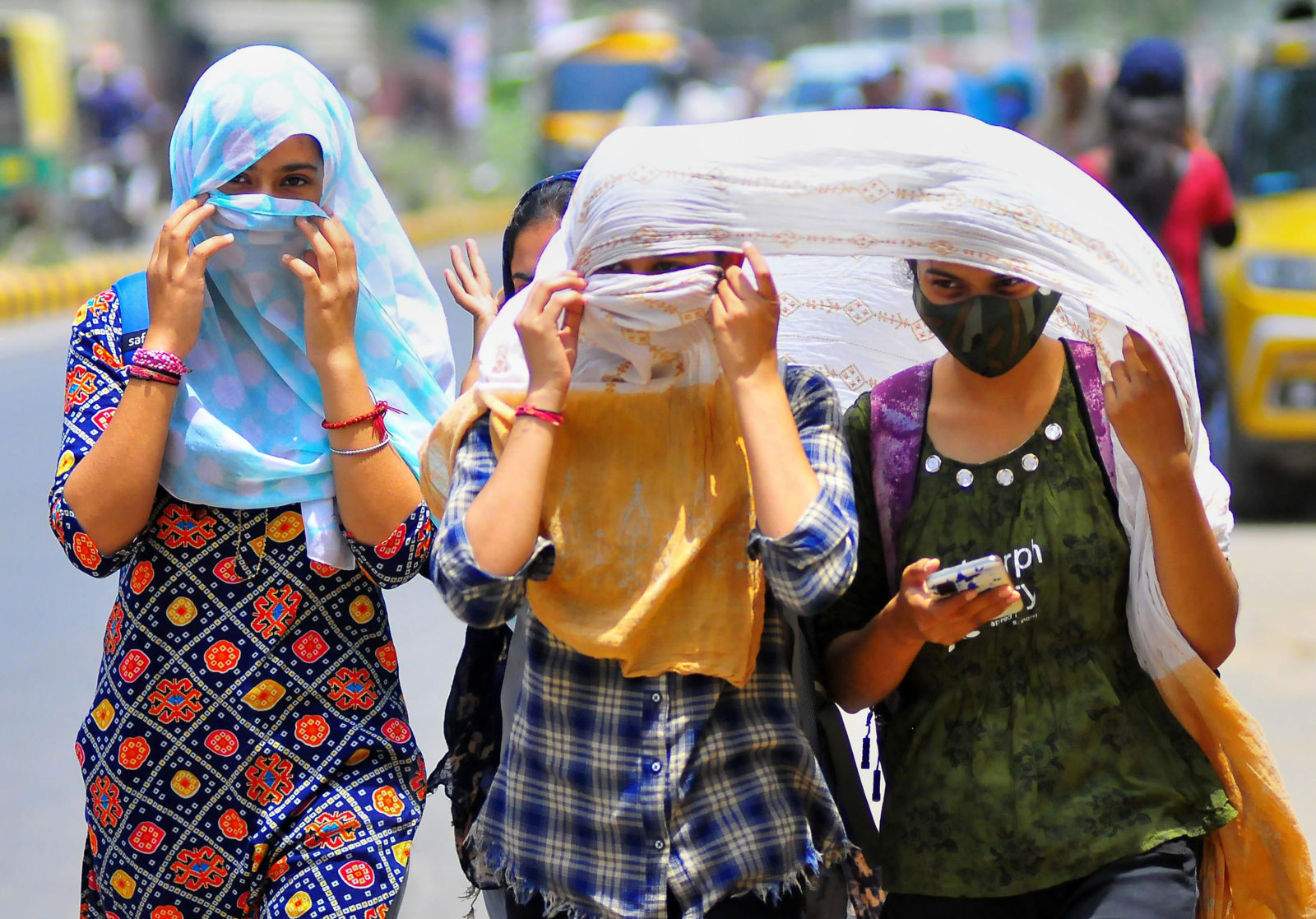 Three women cover themselves with scarves on a hot summer day in Gurugram, April 29, 2022. Photo: PTI

Kochi: North India is reeling under a heatwave. Delhi sizzled at 45º C on April 28, as did parts of west Rajasthan and Madhya Pradesh. This heatwave will continue for a few more days, according to the India Meteorological Department (IMD). In fact, west Rajasthan will experience a severe heatwave on May 1 and 2.

Many of India’s workers do not have the luxury of staying indoors. Even if some do, it may not offer much relief. That’s because these very same regions are undergoing power outages due to a coal shortage. Rajasthan, for example, has cut down on power supply to industries too, as well as rural areas.

There’s a limit to how much people can adapt to the extreme heat in such cases. Studies show that power outages, combined with heatwaves, can exacerbate physical heat stress. And heatwaves caused by climate change are set to rise in years to come. Mitigating the effects of climate change – by reducing greenhouse gas emissions, among other things – may be the only way out.

But it will need to be a global effort and no country will be immune to the consequences, climate scientists said.

According to the IMD, a region has a heatwave when the maximum temperature reaches at least 40º C or more (if it is located in the plains), or at 30º C or more in the hills. The IMD also declares a region to be experiencing a heatwave when its temperature departs from normal by 4.5º to 6.4º C; if the departure from normal is more than 6.4º C, the region is said to have a ‘severe’ heatwave.

Parts of north and northwest India have been witnessing a heatwave for the past few days. These include parts of Punjab, Haryana, Delhi, Uttar Pradesh, western West Bengal, Bihar, Jharkhand, Rajasthan, Gujarat, Odisha and Vidarbha (west Maharashtra). On April 28, Khajuraho in Madhya Pradesh recorded the highest temperature of 45.4º C, according to the IMD. The same belts reported a heatwave in mid -March too.

And there is no respite in sight for the next four days, according to the IMD’s predictions. The heatwaves will continue in these areas till May 2. In fact, west Rajasthan will experience severe heatwaves on May 1 and 2. During severe heatwaves, high temperatures could cause symptoms of heat stress in people who are exposed to the sun during this time.

The IMD recommends that people avoid heat exposure. Doctors are advising that people not venture outdoors during peak heat hours (between 11 am and 4 pm) if they can.

It’s not surprising then that the hotter the weather, the higher the power consumption. The peak-power demand in India surged to a record high on April 28, the power ministry said. Power is a crucial factor in dealing with the heat, even if it’s only electrical fans that most people can afford.

In fact, even this humble method of staying cool is vital, said Dr Diwakar Tejaswi, a private health practitioner in Patna and medical director of ‘Public Awareness for Healthful Approach to Living’.

Patients have already begun coming in with direct and indirect symptoms of heat stress such as fevers related to heat strokes, as well as nausea, vomiting and indigestion caused by reactions to heat.

“Fans reduce indoor temperature and help maintain a lower body temperature,” he said. “So power is extremely important during heatwaves.”

But power supply is something many homes in north India do not have for several hours everyday. Power outages have become common in states including Punjab, Delhi and Rajasthan. Thermal power plants are running low on coal.

In Punjab, irregular coal supply to thermal power plants is causing an acute shortage of power, The Tribune reported. Rajasthan, meanwhile, has slashed power supply in rural areas (by three hours in villages). It has also scheduled four hours of power cuts for factories, making it at least the third state to disrupt industrial activity to manage surging power demand amid an intense heatwave, The Wire Science reported.

But coal shortage isn’t the reason for the power disruptions, Union power minister R.K. Singh claimed; he pinned the blame on states not having paid pending dues to Coal India. States governments have said, however, that the Union government failed to anticipate the surge in power demand and is now forcing states to cope by themselves.

But as governments squabble, the people are suffering. A study in the US found that power failures combined with heatwaves risked two-thirds of the residents of three major cities to heat exhaustion and heatstroke. This combination may be the “deadliest climate-related event we can imagine,” the lead author of the study told the New York Times.

As climate change grips the world, such extreme events – including heatwaves – are set to become more common, warned a 2019 climate report by the UN Intergovernmental Panel on Climate Change (IPCC). India is among the countries most at risk, it said. Experts told The Print that the ongoing intense heatwave – which is also earlier than usual – is likely the effect of climate change.

Indeed, the current heatwave is exacerbated by anthropogenic global warming and those who have contributed least to the emissions are possibly seeing the worst impacts, said Chandni Singh, who studies climate change adaptation at the Indian Institute of Human Settlements, Bengaluru.

“These are low income households living in informal settlements with tin roofing, informal workers like street vendors who have to be outdoors for their livelihoods. Importantly, we cannot adapt to increasing heat indefinitely,” she said.

This is also why climate change mitigation is not straightforward. As science writer Leigh Phillips wrote in 2018: “a right to air-conditioning is both morally just and entirely attainable – we simply have to make sure we don’t exacerbate climate change, air pollution, and energy poverty as we deliver it.”

Phillips also argued that this right would be due not only to exploited labourers in India and China but also to those in better-off countries, such as Germany or the US.

At the same time, the latest IPCC report published in March also says there are limits to adapting to climate change. Given this, we need to focus on greenhouse gas mitigation urgently, said Singh, one of the lead authors of the March IPCC report.

This involves actions such as implementing stricter policies to decrease carbon emissions.

“Mitigation is a global commons problem and while today India is seeing these extremes, the projections are clear – no country will be spared from the impacts of climate change, so it is in our collective interest to mitigate deep and fast,” she added.