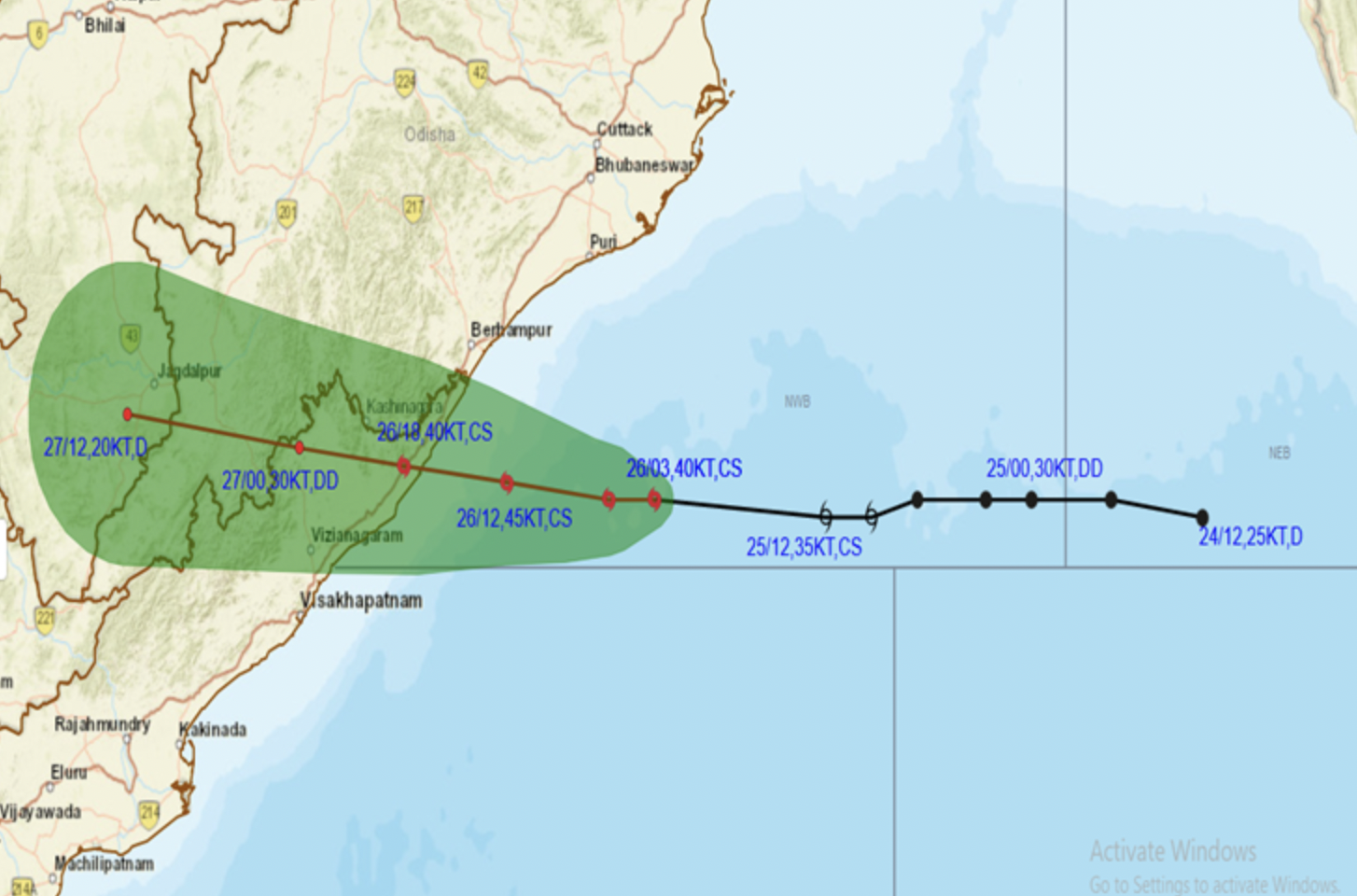 Bhubaneswar: Barely four months after ‘Yaas’ wreaked havoc in Odisha, the coastal state is bracing for another cyclone, ‘Gulab’, which is likely to make landfall on Sunday evening between Gopalpur and Kalingapatanam in Andhra Pradesh, the India Meteorological Department said.

The deep depression over the Bay of Bengal intensified into cyclone ‘Gulab’ on Saturday and an ‘red’ alert has been issued for north Andhra Pradesh and adjoining parts of Odisha, it said.

West Bengal, however, heaved a sigh of relief for now, as the weatherman said the developing cyclonic storm is expected to give the region a miss, but also forecast the formation of a new low-pressure system near the coast of Myanmar, which, in all probability, will dump heavy rain in the state’s southern districts next week.

Cyclone Gulab, as named by Pakistan, lay centered about 370 km east-southeast of Gopalpur in Odisha and 440 km east of Kalingapatnam in Andhra Pradesh, and it moved nearly westwards with a speed of 7 kmph in the last six hours, the IMD said.

The Odisha government has already mobilised men and machinery, and launched an evacuation drive in seven identified districts in the southern parts of the state.

The maximum focus is on Ganjam and Gajapati, a senior official at the Special Relief Commissioner’s Office here said.

Mohapatra said the wind speed of the weather system will vary between 75 kmph and 85 kmph, gusting up to 95 kmph.

“Many low-lying areas will be inundated in the identified districts. Flash floods are feared in the hilly areas of Odisha’s southern region. Urban pockets in Ganjam and Puri could experience waterlogging due to heavy to very heavy and extremely heavy rainfall in parts,” he said.

The district collectors of Ganjam, Gajapati, Rayagada and Koraput have also taken precaution against possible landslides in view of the downpour and high-velocity winds, officials said.

As many as 42 teams of the Odisha Disaster Rapid Action Force (ODRAF) and 24 squads of the National Disaster Response Force (NDRF), along with about 102 teams of fire brigade personnel, have been dispatched to the seven districts – Gajapati, Ganjam, Rayagada, Koraput, Malkangiri, Nabarangpur and Kandhamal, Special Relief Commissioner (SRC) P.K. Jena said.

Ganjam is expected to be severely affected by the cyclonic storm, and 15 rescue teams have been deployed in that area alone, Jena said.

Besides, 11 fire service units, six teams of the ODRAF and eight of the NDRF are on standby for emergency purposes, he said.

Jena said the intensity of the cyclone will be similar to that of Titli’, which battered the state in 2018.

“During the landfall, the wind speed could hover between 90 kmph and 100 kmph. Barring that period, the velocity on Sunday is expected to be limited to 70 kmph. Four-five districts will receive heavy rainfall.

“Southern Odisha rivers such as Rushikulya, Nagabali and Vansadhara could swell due to extremely heavy rainfall,” the SRC said.

Over the next three days, the sea condition will be rough to very rough and fishermen in Odisha, West Bengal and Andhra Pradesh have been asked to not venture into east-central and adjoining northeast Bay of Bengal.

Meanwhile, the IMD said Kolkata in West Bengal and its adjoining areas, which are still reeling under the impact of torrential rain that occurred earlier this week, should brace for heavy showers next Tuesday and Wednesday owing to the new weather system near the Myanmar coast.

“The system is expected to move northwestwards and reach the West Bengal coast around September 29,” it said in a special bulletin.

Under the influence of cyclone ‘Gulab’ and the developing weather system, rain and thundershower with lightning are very likely to occur at “many places” in south Bengal on Sunday and Monday, and “most places” on Tuesday and Wednesday, the weatherman added.