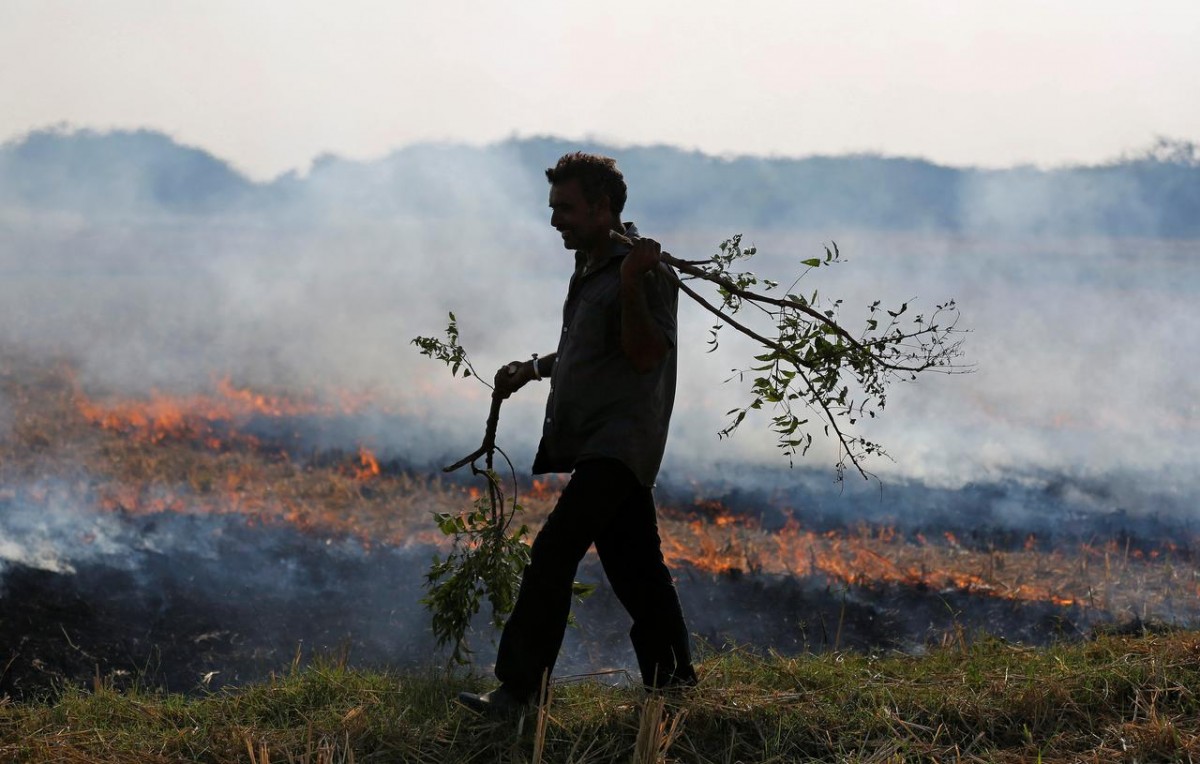 A farmer burns paddy stubble in a field on the outskirts of Ahmedabad. Photo: Reuters.

Indian scientists have developed an organic composting solution that farmers can use as an alternative to burning crop stubble. Capsules containing various fungi were developed by microbiologists at the Indian Agricultural Research Institute (IARI) at Pusa in New Delhi.

The city bears the brunt of polluting smoke wafting from across the fields of neighbouring Haryana, Punjab and Uttar Pradesh states as farmers burn rice stubble to prepare for new planting in October and November each year. This, combined with colder temperatures, humidity and lack of wind leads to pollution getting trapped during the autumn.

IARI director Ashok Kumar Singh says the “bio-decomposer” naturally degrades about 90% of the rice straw. After harvesting the rice, farmers need to chop off the left-over straw into small pieces, spread them over the entire field, and spray the solution on the straw. The fields are then irrigated and left for 25 days.

IARI undertook demonstration trials of the fungal decomposer over 12,000 hectares in suburban Delhi and three neighbouring states during the summer or ‘kharif’ season that starts in June and ends in October. IARI has also sent capsules to farmers in Andhra Pradesh, Odisha, Telangana and West Bengal. The institute has licensed the technology to 10 companies for large-scale production.

The pilot project has been declared a success. Delhi environment minister Gopal Rai said, “the bio-decomposer experiment has shown that 90% of the stubble can be converted into manure in about 20 days… the central government and the state governments should also implement this method.”

The bigger question is whether farmers will embrace the new technology. The solution is cheap – four capsules cost USD 1.35 and are enough to decompose rice straw over a one-hectare field. But it is still unlikely the farmers will use the capsules unless they are distributed for free. IARI plans to supply them along with rice seeds, the IARI director says. A spokesperson for the department of environment in the Delhi government said they are distributing the capsules to farmers willing to try them out, free of cost in suburban areas such as Mundka, Najafgarh and Narela.

The new technique adds to other techniques currently used instead of burning crop residue. These include using rice straw to generate biofuel, biogas and compost; and a tractor-mounted seeder that cuts and lifts the rice straw, drills seeds directly into the soil, and covers with the straw back as mulch. One reason earlier techniques were not adopted is straw and other crop residue do not break down easily, and thus plowing them back into the fields reduces productivity. This breakthrough would avoid this.

More radical approaches have been proposed. A 2019 report in the journal Science says thousands of farmers in northern India could increase their profits  by adopting ‘no-till’ farming, in which farmers leave the soil undisturbed, with crop residue covering the land. Such alternative farming practices could also cut farmers’ greenhouse gas emissions by as much as 78% and help lower air pollution in surrounding cities like New Delhi, the research shows.

The study was led by a global team of eminent agriculture and environmental scientists from The Nature Conservancy, the International Maize and Wheat Improvement Centre (CIMMYT), the Indian Council of Agricultural Research (ICAR), the Borlaug Institute for South Asia (BISA) and the University of Minnesota. It concludes that directly seeding wheat into unplowed soil and shredded rice residues was the best option — it raises farmers’ profits through higher yields and savings in labour, fuel and machinery costs.

The traditional farm practice of burning crop residue continues to be one of the major causes of air pollution in India, as well contributing greenhouse gases to the air and worsening public health.

According to India’s Ministry of New and Renewable Energy, the country generates about 500 million tonnes (Mt) of crop residues each year, mainly from cereals. Uttar Pradesh state produces the most at 60 Mt, followed by Punjab (51 Mt) and Maharashtra (46 Mt).

India’s National Policy on Management of Crop Residue says the problem of burning crop residues has intensified in recent years due to “the shortage of human labour, high cost of removing the crop residue from the field and mechanised harvesting of crops.”

The two northern states of Haryana and Punjab, sites of India’s “Green Revolution” that made India self-sufficient in cereals production, alone burn around 35 million tonnes of biomass every year, according to a report by The Energy and Resources Institute (TERI), New Delhi.

“It is therefore highly desired to redress this issue in a manner to convert the biomass crop residue into a superior resource which can either be used as energy alternative or for producing useful material with simultaneous reduction in GHG (greenhouse gas) emissions,” the TERI report says.

Stubble burning releases large amounts of polluting gases such as carbon dioxide, carbon monoxide, nitrogen oxides and sulphur dioxide as well as soot.  These pollutants can remain in the atmosphere for an extended period of time if lower temperatures do not permit their quick dispersal.

S. Bhuvaneshwari, associate professor at the department of civil engineering at the SRM Institute of Science and Technology in Kancheepuram, Tamil Nadu, said that biodegradation techniques such IARI’s decomposer offer only a partial solution to the problem of crop stubble management.

Biological degradation by bacteria works with the softer components such as cellulose, said Bhuvaneshwari, who co-authored a paper on policy challenges in crop residue burning in India in the International Journal of Environmental Research and Public Health in 2019.  But lignin, a harder substance present in stalks, straw and husk, is much more difficult to break down.

Other alternatives such as composting, biofuels, use of stubble in the construction industry such as brick making for reinforcement, need to be promoted, she said.

The real reasons behind the crop residue burning are socioeconomic rather than agricultural or waste management issues, Bhuvaneshwari added. Solutions involving long-haul transportation, expensive technology or high capital investment are less likely to succeed with poor Indian farmers. So, solutions that feed the nutrients in the crop residue back into the soil hold more potential.

The big problem with the IARI solution is that the straw must be chopped into small pieces before it can be turned into fertiliser. Mohan Singh, a farmer in Rohtak district of Haryana, said, “If I could pay the labour cost of chopping the straw, I could just as well pay to get it removed from my farm altogether. It is good if the straw is turned into compost, but the experts have to find a way to do it without asking us to get the straw chopped. We know all the problems caused by stubble burning. We still do it because all other methods cost too much.”

This article was originally published by The Third Pole and has been republished here with permission.

T.V. Padma is a freelance science journalist. She tweets at @tvpadma.