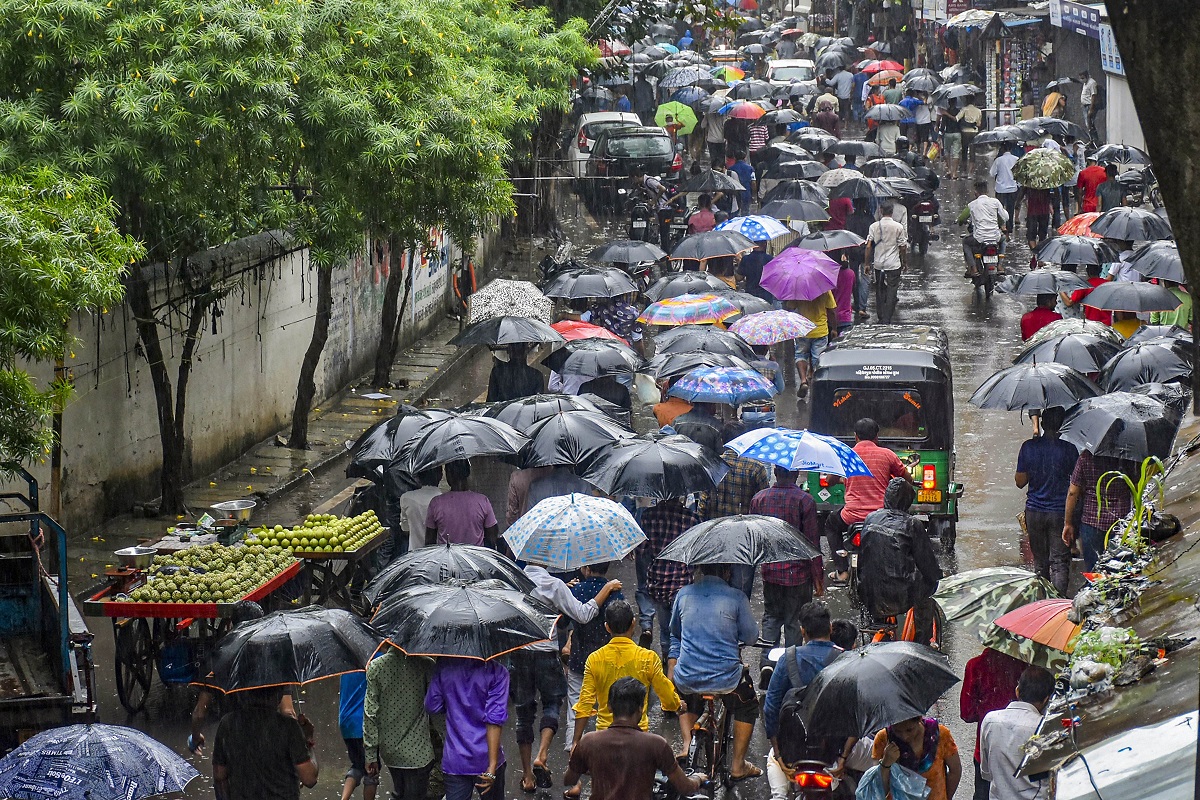 New Delhi: That India is experiencing a third consecutive September with excess rainfall could be an indication of a changing monsoon pattern, The Hindu has reported – even if it may be too soon to “demonstrably prove” that this is a lasting consequence of global warming.

September usually marks the withdrawal of the monsoon in India. However, in the last three years, there has been excess rainfall in the fourth month of the monsoon, when the historical rainfall average has been 17 cm. According to The Hindu, September rain in 2019 was 152% that number, or about 25 cm. In September 2020, the country received 17.7 cm, a little more than normal. And this year, as of September 24, the country has already recorded 2 cm more than normal.

In some areas, rain has been particularly heavy. For example, Delhi recorded 16 rainy days until September 24, receiving 409.2 mm of rain. This was 274% in excess for the month.

With Cyclone Gulab hitting the country’s eastern shores on Monday, this number is only expected to rise.

While the Septembers between 2010 and 2012 also reported above-average rainfall, The Hindu pointed out an important difference between those three years and the current trend. Though there was above-average rainfall in September 2010, 2011 and 2012, it did not “boost the total rainfall India received”. In 2010 and 2011, the country received only got 2% more rain than normal; in 2012, it received 7% less.

Weak rainfall in August meant that before this month began, India had had a 9% rainfall deficit. While the India Meteorological Department (IMD) predicted above average precipitation in September to reduce the deficit to 4%, the rain received thus far has been more than expected. Now, there is only a 2% shortfall with a week of rains still to come.

Mahesh Palawat, the chief meteorologist at the private weather-forecasting agency Skymet, told The Hindu that the monsoon is withdrawing much later than usual: “This means more September rainfall. But why it’s staying on for longer is still to be understood.”

According to the newspaper, while monsoon normally starts to withdraw by September 1 and is completely gone by October, that hasn’t been the case for the last two years either. Last year, the IMD recorded the date of the beginning of the withdrawal as September 17. “In both 2019 and 2020,” the report says, “the monsoon began its withdrawal in October and the same is expected this year too.”

K.J. Ramesh, a former director general of the IMD, said global warming is “increasing moisture levels during the monsoon period [and] this is affecting the distribution of the rain.” He added that “because they have low base rainfall … even the slightest increase” in June and September “shows up as big percentage gains.”

The case of Odisha

Rainfall in Odisha this monsoon has been a microcosm of India vis-à-vis the climate-change era monsoon experience. This year, the coastal state recorded deficient rainfall in June, July and August – and then excess rain in September.

Umashankar Das, a senior scientist at the Regional Meteorological Centre, Bhubaneswar, told Down to Earth that the state received 181.3 mm of rain in June 2021 against a normal of 217.7 mm – a deficit of 17%. In July, there was a 20% deficit followed by a startling 44% in August.

“But till September 23, Odisha received 334.6 mm rain, i.e. 76% excess rainfall, due to three low-pressure [systems] in the Bay of Bengal,” Das told the magazine.

He added that longer monsoon pauses and heavy rainfall for a few days are “signs of climate change”.

In predominantly agrarian states, changing monsoon patterns have wreaked havoc in farmers’ lives and livelihoods. In Odisha, the dry spell between June and August followed by excess rain in September “greatly affected the kharif crop”.

Sarat Chandra Sahoo, director of the Centre for Environment and Climate in SOA University, Bhubaneshwar, told Down to Earth that the number of rainy days is also decreasing because of climate change.

A study published in June this year projected that global warming will make India’s monsoon “wetter and more dangerous”. The scientists mapped rainfall patterns over a million years using information gleaned from core samples drilled from the bed of the Bay of Bengal, where the monsoons drain.

According to the New York Times, the study found that “high rainfall and low salinity” were recorded after periods of “higher concentrations of atmospheric carbon dioxide, lower levels of global ice volume and subsequent increases in regional moisture-bearing winds”.

With human activity increasing concentrations of greenhouse gases in the atmosphere, India should expect the same monsoon patterns, the scientists said.

Steven Clemens, the lead author of the study, told NYT, “We can verify over the past million years increases in carbon dioxide in the atmosphere have been followed by substantial increases in rainfall in the South Asian monsoon system.”

Anders Levermann, a professor of the dynamics of the climate system at the Potsdam Institute in Germany who has produced research on climate model monsoon projections, told the newspaper that the consequences of these projections are “dire” for the people of the Indian subcontinent.

He said the risk of “catastrophically strong” seasons is growing and the “increasingly erratic nature of the seasons holds its own risks”.