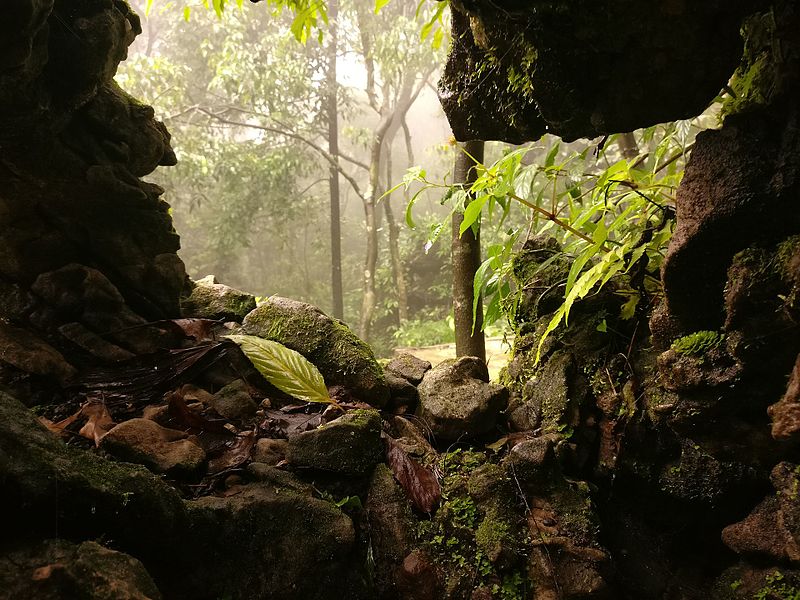 Meghalaya’s caves are some of the longest and deepest in India. Photo: Arkadeep Bhattacharya/Wikimedia Commons.

An analysis of 119 years of rainfall measurements at different rain gauge stations across northeast India, has revealed a decreasing trend in summer rainfall since 1973, including in rainy Meghalaya, reputed for hosting the world’s wettest place.

The study has said that the decline in rainfall is driven by changes in the Indian Ocean temperature and conversion of forestlands and vegetation cover to croplands in the last two decades. These long-term rainfall changes in the region are responsible for the observed shift of the world’s wettest place from Cherrapunji to Mawsynram (separated by 15 km) in recent decades. Mawsynram receives an average annual rainfall of 11,871 mm while Cherrapunji braces for torrential rains every year with an annual average at 11,430 mm.

“Largest rainfall areas are also showing changes in rainfall and that is important for water management,” said Jayanarayanan Kuttippurath, an Assistant Professor at the Centre for Oceans, Rivers, Atmosphere and Land Sciences (CORAL), IIT Kharagpur, West Bengal. “We have also shown the influence of changes in moisture transport from the Indian Ocean, including the Arabian Sea in the pre-monsoon period, on the rainfall shift and its reduction in the northeast and Cherrapunji in recent decades,” said Kuttippurath who is the co-author of the study.

Since northeast India is mostly hilly and is an extension of the Indo-Gangetic Plains, the region is highly sensitive to changes in regional and global climate. Pre-monsoon and monsoon are the rainy seasons of northeast India.

Rain-bearing summer air currents (the Bay of Bengal branch of monsoons) that move north from Bangladesh’s hot and humid floodplains hit the funnel-shaped relief of the Meghalaya hills with deep valleys and gorges; the steep parallel mountains (Garo, Khasi and Jaintia hills) in Meghalaya block the movement of the clouds to the north; they are squeezed in through the gorges and then forced to ascend the steep slopes and shed most of their rainfall in the region.

Despite its rainy reputation the state suffers from water shortage, a paradox that propelled the state to launch its water policy in 2019. A section of experts has also underscored the inadequate availability of rainfall data from the region that challenges longterm observations.

The current study used daily and continuous rain gauge measurements from 16 stations, which are managed by the Indian Meteorological Department (IMD), spread across seven states of northeast India for the period 1901–2019. As for rainfall measurements from the Mawsynram station (MAW), the scientists used data from the annual reports of the Meghalaya Planning Department (the 1970s to 2010) since Mawsynram doesn’t have an IMD-managed rain gauge set up, they noted.

Since the MAW measurements are yearly averaged, they are not used for monthly and seasonal analyses as for the other stations, the researchers said. According to the study, most stations in northeast India show negative trends in rainfall, with the largest decreasing trends in rainfall in summer and the lowest in winter.

“To cross-check our analysis with these measurements, we have used reanalysis and satellite data too. Reanalyses are a combination of measurements and model simulations. Rainfall at Mawsynram is better than that at Cherrapunji as per the data from the 1970s to 2010. We need long term measurements for monitoring and planning and if we want to make a statement on the change in the climate. So far we can say that rainfall is decreasing in the northeast and rainfall is changing in Mawsynram (MAW) and Cherrapunji,” said Kuttippurath.

“Monthly analyses of rain gauge measurements gives you insight on changes at a regional level. And this is possible through a good density of rain gauges that can help us understand spatial variations. But satellite measurements help study large areas and those places where we do not have ground-based measurements,” he added.

G.S. Bhat, Centre for Atmospheric and Oceanic Sciences, Indian Institute of Science Bangalore (IISc), who was not associated with the study remarked that rainfall (RF) measurement “looks trivial” but is one of the “hardest quantities” to measure accurately.

“There is a lot of spatial variation. For example, in one year, I compared IISc annual RF with that measured at IMD Centre on Palace road. The two are separated by about 6 km as the crow flies, but their RF differed by 30 percent, IMD value being higher. IISc and Bengaluru airport values were closer. It is not yet clear what the spatial extent over which RF measured by a rain gauge is representative of. This is more so in hilly areas such as the northeast,” said Bhat.

“MAW may receive more annual RF than Sohra (Cherrapunji) but the rain gauge was located at the latter location by the British. As RG density increases, then we start getting better ideas about spatial variations,” Bhat told Mongabay-India.

Cherrapunji is set upon a plateau that rises 600 metres above the surrounding valleys on the southern slopes of the state. The terrain in and around Cherrapunji is an undulating one with pockets of shrubs. The steep slopes in the gorges are covered by tropical rainforests. In many places, there is hardly an inch of topsoil but mostly rock outcrop, according to an official profile.

Rahul Mahanta, associate professor at Cotton University’s Department of Physics noted that a data crisis in the form of inadequate availability of long and high-quality instrumental records of rainfall data for northeast India (NEI) continues to hinder their ability to carry out a robust evaluation of rainfall variability. “Such robust assessments are essential to better understand, detect, predict and respond to changes in rainfall variability due to climate change,” noted Mahanta, who was not associated with the study, in an email.

Meghalaya’s cave systems also hold clues to how rainfall has changed in the past and how it is likely to behave in the future. For example, researchers are also studying stalagmite growth in the Mawmluh Cave to understand the link between climatic conditions in the Pacific Ocean and winter rainfall amounts in the water shortage-hit region. This distant link between land and ocean records could aid in predicting dry season rainfall amounts in northeast India.

Also Read: Another Erratic Monsoon Season Ends – Could We Have Predicted It Better?

India is planning to set up a Regional Climate Centre (RCC) for the Third Pole (Himalayan) region during the next five years for weather and climate service up-gradation in the Himalayan region and high mountain ranges through impact-based forecasting and risk-based warning, sectoral applications and research and development.

In NEI, long-term, dense and reliable daily rainfall data from IMD is infrequent due to remoteness of the region with low population density, extended periods of regional conflicts and environmental disasters and change in location of the observatories in some stations within the same locality resulting in fragmented or inconsistent data series.

“Further, in the handwritten records, we observed human error occurring during the process of observation, and in the recording,” shared Mahanta. Changes in the surrounding environment also contribute to the errors in the existing dataset.

Mahanta and colleagues mined data from meticulous meteorological records under the British colonial administration from the second half of the 19th century, handwritten rainfall records from tea garden archives dating back to the second half of the 1800s and Jesuit missionary records in the region. They observed a declining trend in rainfall principally linked to natural variability.

“This new dataset comprises daily rainfall time series over 24 well-distributed stations that have operated in NEI for 90-years (1920 to 2009) which will be extended to 100 years shortly. While the reconstructed time series have few data gaps, every effort has been made to fill in these gaps, to improve assessments of the long-term changes in rainfall variability in the region,” said Mahanta.

A better understanding of the physical mechanisms of the NEI’s rainfall variability is crucial for developing advanced projections of future rainfall variability. “Hence a reliable estimate of the trend and/or multi-decadal variability of mean rainfall over the NEI and that of the extreme events are critical for delineating the impact of climate change over the region. Consequently, the existing rainfall distribution patterns over NEI have either been significantly oversimplified or inaccurately examined and that tends to ignore the actual rainfall gradients,” added Mahanta.