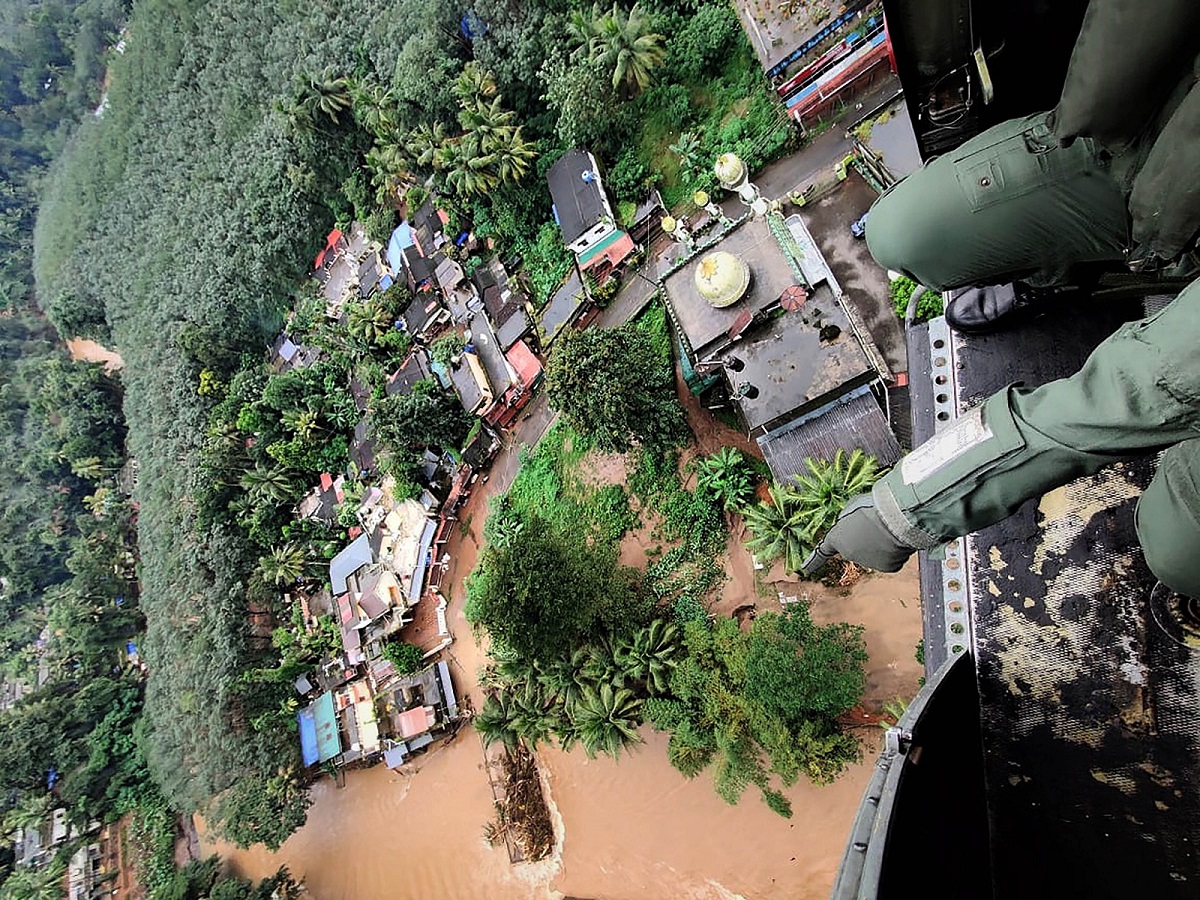 An aerial view of the landslide-affected area of Koottikkal in Kottayam district, October 17, 2021. Photo: Indian Navy via PTI

New Delhi: With rains lashing many parts of India over the past few days – causing flash floods, landslides and waterlogging, the immediate dangers posed by climate change have once again come to the fore.

While it is usual for the retreating monsoon to shower parts of the country in October and November, the rainfall this year – and in the past two years – has been noticeably higher.

In Kerala, at least 25 people have died after incessant rains caused landslides and flooding. On Monday morning, water levels in several dams continued to rise in Kerala due to heavy rains, with the state government issuing alerts that shutters of certain dams will be raised.

According to India Today, several houses and two roads were damaged in the Baithalangso area of Assam’s West Karbi Anglong district, which was hit by a flash flood that was triggered by heavy rain. Amtreng and nearby areas under the jurisdiction of the Baithalangso police station in were also affected. While no human casualties were reported, several properties were damaged and some areas have been cut off due to the rains.

Delhi too was lashed by heavy rain on Sunday, leading to waterlogging and traffic jams at several parts of the city. On Sunday, the maximum temperature was 30.4 degrees Celsius, three notches below normal, with the India Meteorological Department (IMD) attributing the untimely rains to “western disturbance”.

Parts of Uttar Pradesh and Uttarakhand also experienced inclement weather over the past few days, while the IMD said that Odisha and West Bengal are likely to receive heavy rains until October 20.

These unusual weather events are also likely to cause huge damage to the agriculture sector, with sowing for the Rabi season beginning across the country.

The effects of climate change have become increasingly evident in Kerala, which faced drought conditions during 2015 and 2016, which was followed by the cyclonic storm Ockhi causing catastrophic flood and landslide episodes. The latter two phenomenon were also observed in 2018, 2019 and 2020.

According to S. Abhilash, a scientist at the Cochin University of Science and Technology (CUSAT), the brief, intense rain spells that regions of Kerala have experienced recently indicated “mini cloudbursts”

Mini cloud bursts are marked by intense short spells which may not exceed 10 cm in one hour – the classical definition given by the IMD.

He told news agency PTI that the starting point of the catastrophe in Idukki and Kottayam are the cloud bursts in the high ranges and the sudden, heavy rainfall continued leading to landslides and flash floods.

Less intense rain spells (about 5 cm in 2 hours) may cause flash floods and landslides along the slopes of Western Ghats, Abhilash said in an article published in a government publication.

He also pointed to human activity as a cause for the increasing intensity and regularity of these natural phenomena. “The combined effects of cloudburst, landslides and flash floods may get aggravated by degradation of land due to human activities such as the conversion of forests to plantation and crop fields,” Abhilash opined.

As The Wire Science has reported earlier, this year was the third consecutive September during which India experienced excess rainfall. This indicates a changing pattern, as the monsoon usually withdraws in September.

Last year, the IMD recorded the date of the beginning of the withdrawal as September 17 – the normal date for which is September 1. In 2019 and 2020, the monsoon began its withdrawal in October and the same pattern is evident this year too.

While scientists say it is too early to ‘demonstrably prove’ that this is a lasting consequence of global warming, it is the likely suspect.

Umashankar Das, a scientist at the Regional Meteorological Centre, Bhubaneswar, told Down to Earth that longer monsoon pauses, combined with heavy rainfall for a few days are “signs of climate change”.

A study published in June predicted that global warming will make India’s monsoon “wetter and more dangerous”. An increase in greenhouse gases, caused by human activity, will lead to “high rainfall and low salinity”, the study said, based on analysis of rainfall patterns over the past million years.

Anders Levermann, a professor of the dynamics of the climate system at the Potsdam Institute, said that the consequences of these projections are “dire” for the people of the Indian subcontinent. He said the risk of “catastrophically strong” seasons is growing and the “increasingly erratic nature of the seasons holds its own risks”.

As rains wreak havoc across the country, the scientist’s statement rings loud.