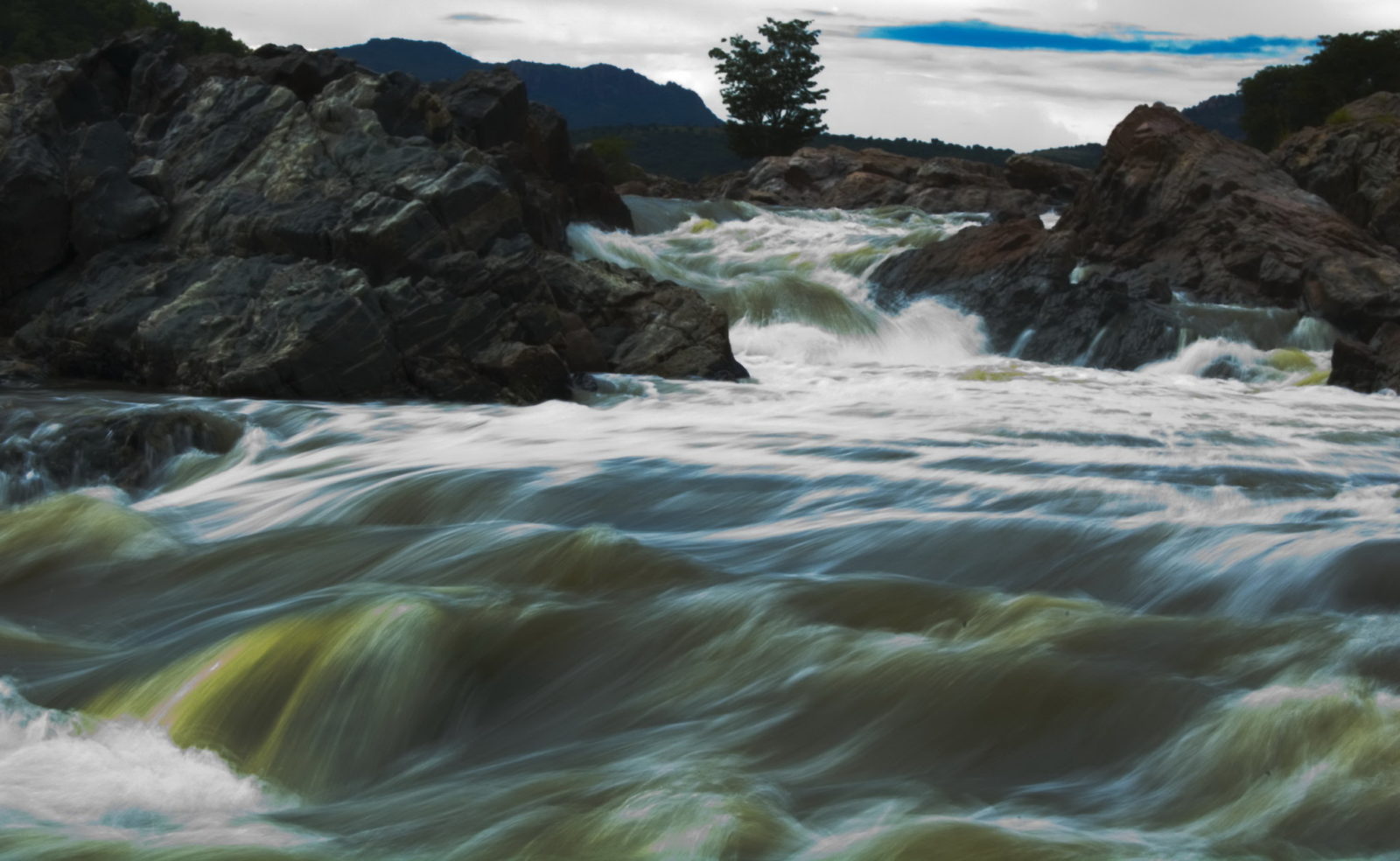 A view of the Cauvery river in Mekedatu, Karnataka. Photo: Renjith Sasidharan/Flickr, CC BY 2.0

This past December marked the fifth anniversary of the landmark Paris Agreement. Soon after, the Biden Administration rejoined the Paris Agreement as one of their first actions in office. And in January, the Climate Adaptation Summit once again convened global leaders and local stakeholders to accelerate adaptation action.

As these milestones reinvigorate a call to action for our politicians and business leaders to act on climate and “ramp up climate ambition,” all eyes inevitably turn to the usual avenues for addressing and adapting to climate change: forests, clean energy and waving goodbye to our toxic relationship with fossil fuels. And while mitigation efforts continue to dominate the conversation, adaptation is ever-increasing in importance in global discussions as extreme weather and its impacts worsen around the world and countries work to build stronger national commitments.

Funding, policies and actions supporting adaptation, especially nature-based solutions, however, remain weak. They overlook a powerful resource in the fight to adapt to a changing climate: rivers.

We are seeing the climate crisis manifest through water. Droughts and floods are increasing in frequency and severity from the Mekong River to the arid Rio Grande, from the plains of Africa to the world’s largest tropical wetland, South America’s Pantanal.

Rivers and their floodplains have the potential to act as shock absorbers to climate change. But maximising their ability to do so requires strategic interventions that keep their natural features intact or incorporate green and grey infrastructure that allow natural processes to occur. Governments and business leaders must prioritise climate adaptation actions that include rivers as part of the toolbox of nature-based solutions for solving the climate crisis.

Rivers are powerful agents for keeping wildlife and communities healthy and resilient. Their natural functions provide life-giving resources and, critically for sinking deltas around the world, protect coastal areas against rising sea levels. Let’s dive deeper on a few of these functions:

* Sediment flow: Rivers carry sediment all the way to the ocean where, over time, the deposited sediment accumulates to build a delta. Deltas that are starved of natural sediment flows are at risk of being inundated by rising seas. The natural flows also provide sediments to reinforce riverbanks and deliver nutrients to fertile agricultural lands and mangrove forests along the floodplains and a river’s edge. Infrastructure, such as dams, blocks the flow of sediment, one of the causes of sinking and shrinking deltas.For example, over 100 billion tons of sediment is now stored behind upstream dams, greatly reducing sediment flows to coasts around the world. According to a recent study, at least 25 million people live in sediment-starved deltas and thus are vulnerable to increased coastal flooding and inundation.

* Flood risk reduction: Floodplains and wetlands along rivers are like sponges, providing a buffer for the rising and swelling of rivers, especially during flooding events. As climate change exacerbates floods, it is more important than ever that we protect and restore floodplains and wetlands. Without action, the costs to society are potentially enormous. For example, coastal flooding alone could cost up to $1 trillion per year in damages by 2050 in coastal cities if no adaptation action is taken. Restoring floodplains and coastal wetlands, along with other interventions, is a critical preventative measure against such losses.

* Food and water security: River systems are among the most biologically diverse and productive ecosystems on the planet. Early civilisations flocked to rivers for their ability to support fertile agricultural lands, clean drinking water, and protein such as fish. This holds true today. River fisheries and those from other inland wetlands provide a source of protein for hundreds of millions of people As communities become increasingly stressed by climate change, it is more important than ever to protect the basic needs that rivers provide.

When rivers are able to flow naturally and are not impeded by infrastructure, like dams, we call these “free-flowing” rivers. They are vital to supplying climate adaptation services, but increasingly, human activities are severing rivers. This decline in river health is sounding alarms to freshwater scientists everywhere:

* Connectivity: Infrastructure development and other man-made changes have fragmented or disrupted two-thirds of Earth’s longest rivers.

* Species decline: Populations of freshwater species have experienced a staggering 84% decline since 1970

* Dams and infrastructure: There are roughly 60,000 large dams around the world, with over 3,700 more hydropower dams currently planned or under construction.

Rivers and their floodplains lose the ability to buffer against floods and to deliver needed sediments to downstream deltas as they are fragmented. The Mekong River illustrates a harsh reality communities face when infrastructure is poorly planned.

The Mekong Delta is currently shrinking and sinking, having lost about 500 hectares of land in the decade leading up to 2012. While sea-level rise and groundwater extraction play a role, the immediate major causes of higher tides and salt intrusion in the delta are sand mining and trapping of sediments behind upstream dams.

Additional planned dams within the Mekong Basin will further exacerbate this problem, putting the tens of millions of people living in the delta at even greater risk for increased land loss, flooding and inundation.

In one hopeful measure, the Cambodian government has put a 10-year moratorium on any new dams on the main stem of the Mekong in Cambodia.

Wins to build on

Countries from around the world and other members of the International Union for Conservation of Nature (IUCN) recently signed up to support the motion, ‘Protecting rivers and their associated ecosystems as corridors in a changing climate.’ This sets an important precedent for incorporating river protection into climate action policy.

There are a few other bright spots where governments and civil society are taking action to ensure that rivers and their floodplain and riparian zones can continue to act as corridors and buffers in a changing climate. One example is the recent action of the Colombian government to designate the entire free-flowing Bita River Basin as a Ramsar site, i.e. an internationally protected wetland. Another example is Mexico’s decrees for water reserves across nearly 300 basins that have effectively protected against over-extraction of water or blocking of river flows in some of the most intact basins of the country.

In Mongolia, the government has recently revised and approved 8.2 million hectares of water protection zones including riparian areas from mining and industrial development across seven provinces and is replicating this process in six additional provinces. In the U.S., the Wild & Scenic River designation has so far protected 13,413 miles of 226 rivers in 41 states. And this past autumn, U.S. environmental groups and the hydropower industry signed a joint statement to collaborate on river restoration and decarbonising US electricity.

The burgeoning efforts to restore rivers began in the United States and have now spread to Europe, where the recent commitment of the European Union to dismantle dams and open up 25,000 km of rivers provides another compelling example. The “Room for the River” initiative of the Dutch government has taken measures at more than 30 locations along the Rhine, the Meuse, the Waal, and the Ijssel to give these rivers space to flood safely.

This progress is evidence that actions that allow rivers to act as corridors and buffers to build resilience in a changing climate are possible and that there is opportunity to replicate these wins.

Humanity has always depended on the life-giving resources that rivers provide. As our global temperatures rise, people will be more dependent on rivers than ever before – both in terms of the benefits that they provide and the havoc they can bring if not well managed.

We cannot afford to continue to destroy one of our tools in the fight to adapt to climate change. Rivers need a seat at the table. The best-laid climate action plans will be those that account for the nature-based solutions rivers and floodplains provide in adapting to a changing climate. Business and policy leaders can incorporate rivers into their plans to support the flow towards a climate-resilient future.

When we think of climate solutions, let’s also think of rivers.

Michele Thieme is lead freshwater scientist at World Wildlife Fund (WWF). This article was first published by Mongabay and has been republished here under a Creative Commons license.

The Wire Science@TheWireScience
3 Following 15.7K Followers
The recent announcement of a Rs-50,000 crore budgetary allocation to be spent over the next five years moves the pr… https://t.co/EIzBsjL07A
17 hours ago
1 5
Jacob Puliyel, a former member of the National Technical Advisory Group on Immunisation, has filed a PIL in the SC… https://t.co/nd7nYSuMsS
18 hours ago
The cyclone brought gusts of up to 210 kmph that would put it on par with a Category 3 hurricane, rating it one lev… https://t.co/yw6kAMI02Y
19 hours ago
2
Warmer seas feed stronger cyclones, and when they collide with the pandemic, a third beast is born… https://t.co/GjGHZbOb1A
19 hours ago
1 2
In a letter published in the journal Science, 18 scientists say that theories of SARS-CoV-2's accidental release fr… https://t.co/rynto2YelO
19 hours ago
“We want to preserve the memory of people who have been lost,” said Oswal. “Because it’s so easy to just become a s… https://t.co/vWmMPfTibz
20 hours ago
1 2
No doubt taking these steps today will help India in the longer term but the government expecting an average output… https://t.co/NhLj66zks2
21 hours ago
1
The severe cyclonic storm ‘Tauktae’ over the Arabian Sea has intensified into a very severe cyclonic storm and is e… https://t.co/3spa1KWSby
22 hours ago
In Uttar Pradesh’s Mewla Gopalgarh village, roughly 70 km from the national capital of New Delhi, what the villager… https://t.co/jJCEiL4L61
23 hours ago
3
India’s COVID-19 tally mounted to 24,965,463 on Monday with 281,386 new cases, the lowest in 27 days, while the dea… https://t.co/dtHoE4Ol3I
1 day ago
Many people recovering from COVID-19 have of late been afflicted by black fungus – or mucormycosis – disease. When… https://t.co/Zh2mi2HVKu
1 day ago
The state govt says 4,218 people died of Covid between March 1-May 10, 2021. But it issued 1,23,871 death certifica… https://t.co/KM0ZLiIMru
1 day ago
1 1
India is home to nine of the 10 most polluted cities on the planet. Now a growing body of research points to long-… https://t.co/GCeX26fMpG
1 day ago
10 29
Virologist Shahid Jameel has resigned from his position as the chair of the Scientific Advisory Group of the consor… https://t.co/BnKZ2EWlTa
1 day ago
2 12
"Policy has to be based on evidence, not the other way around. I am worried that science was not taken into account… https://t.co/EEKPK4HXSd
1 day ago
10 17
Contact us