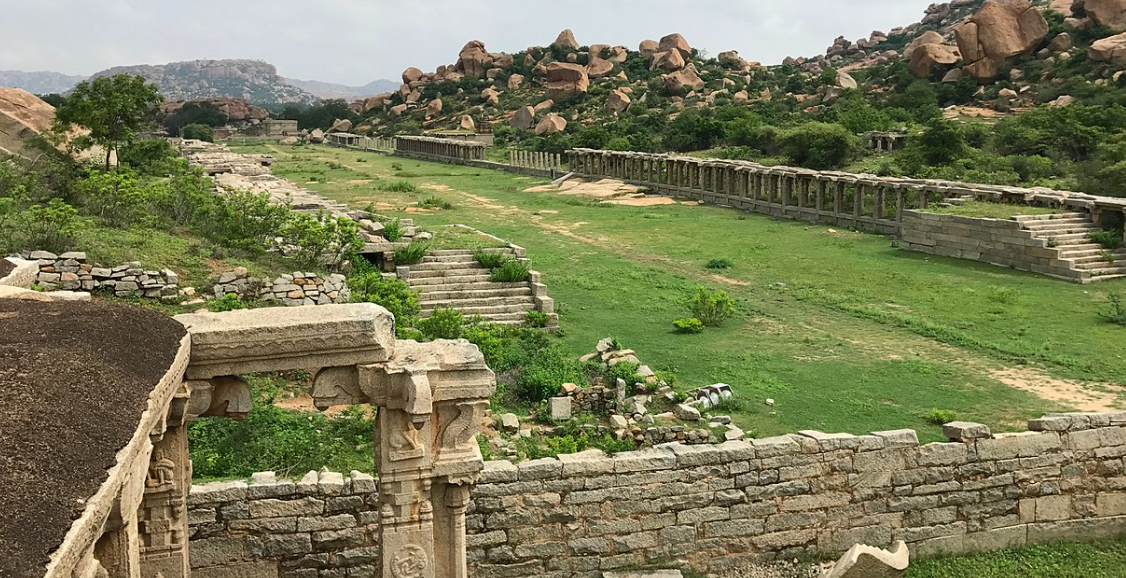 Climate Action: Why India Can’t Meet Its Net-Zero Target by Itself

The ruins of the Achyutaraya temple and a market, in Hampi, September 2017. Photo: Ms Sarah Welch/Wikimedia Commons, CC BY-SA 4.0.

Residents of the town reported finding road contractors lifting the soil near a hillock recently, and alerted authorities and halted the work.

The newspaper reported the locals saying the soil was mixed with thin sand for use in several civic works, including road construction.

“The soil holds the boulders and any kind of disturbance is not good for monuments. There have also been attempts at stone quarrying around Hampi, which must be stopped,” one resident told The New Indian Express.

A part of the fort around Kamala Mahal at Hampi, built with heavy stone blocks, had collapsed on March 12, according to The Hindu.

“The fort wall has collapsed on its own. There is no damage to other monuments at the World Heritage Site,” P. Kalimuttu, deputy superintendent of the Archaeological Survey of India, told the publication. “Measures will be taken to rebuild the structure.”

Tirumala Venkata Devaraya, a descendant of Hampi’s erstwhile ruling family, responded to the fall on Twitter: “An entire section of the wall collapsed today and they’ve authorised the drilling for a borewell about 50m from it.”

Whoever is in charge of the conservation of Hampi needs to get their priorities in order.
An entire section of the wall collapsed today and they’ve authorised the drilling for a borewell about 50 metres from it.@ASIGoI pic.twitter.com/11ysaIO7nG

Adding to ongoing development work, the Hampi World Heritage Area Management Authority is also constructing a 40-feet-wide and a kilometre long road amid the ruins, Deccan Herald had reported in September 2020.

The proposed road will cut through Hampi’s ruins, and had drawn fierce opposition from local heritage activists. “Already concrete structures in the name of ticket counters and canteens have come up behind Krishna Temple and near Gejjala Mantapa,” two of them, Y. Shashidhar and J. Shivakumar, are quoted as saying. “Now the proposed road will only spoil the heritage value of Hampi.”

In February 2020, the Supreme Court had noted a persistent threat to historical monuments in the region arising from illegal constructions. It directed authorities in the district to demolish illegal restaurants, hotels and guest houses at Virupapur Gaddi, an oval islet formed by the Tungabhadra river near Hampi.

Also read: Solastalgia Along the Sharavathy: A Quest for Peace in a Conversation With a River

The explosions threatened to destroy the ruins of Hampi, which is 330 km from Chikkaballapur. The stone quarry closest to the ruins is 15 km away, according to Gaon Connection.

Environmentalists told Gaon Connection that Bengaluru’s insatiable appetite for construction and demand for manufactured sand – a substitute for river sand – is driving illegal stone-quarrying in Karnataka.

“Today, thousands of tonnes of manufactured sand is being transported to Bengaluru, and I refuse to believe this is happening without the knowledge of the local authorities,” R. Anjaneya Reddy, from Chikkaballapur, had petitioned against the Stone Crushers Amendment Ordinance 2020, reportedly said.