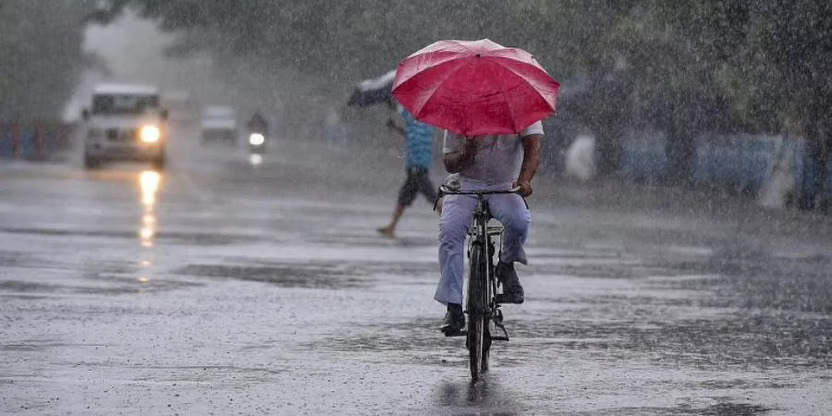 Why Are We Able To Remember Something That Didn’t Happen?

Representative image of a man riding a bicycle while holding an umbrella in the rain. Photo: PTI.

Thiruvananthapuram/New Delhi: The Southwest Monsoon set in over Kerala on Sunday, May 29; three days ahead of its usual date of June 1, marking the start of the four-month rainy season that is crucial for India’s farm-based economy.

Kerala has been receiving rainfall since Saturday and 10 out of the 14 weather monitoring stations in the state have received more than 2.5 mm of rain, fulfilling the criteria for the onset of monsoon, the India Meteorological Department (IMD) said.

The Southwest monsoon has set in over Kerala on Sunday, May 29, against the normal date of onset of June 1, IMD director general Mrutyunjay Mohapatra said.

However, while the monsoon has advanced over Kerala and parts of Tamil Nadu, the Bay of Bengal arm of the weather system was sluggish as it continued to linger just above the Andaman islands.

The Extended Range Forecast issued by the IMD has suggested that the progress of the monsoon over Karnataka, Ga and the entirety of northeast India could be slow.

Earlier, the IMD had forecast the onset over Kerala on May 27, with help from the remnants of Cyclone Asani, which struck the Bay of Bengal a fortnight ago. The forecast had a model error of four days.

However, the influence of the remnant weather systems that lingered over the southern peninsula, petered out, dashing the forecast of an early onset over Kerala and swift progress towards the north.

The other criteria for declaring the onset of monsoons over Kerala are the depth of westerly winds extending up to 4.5 km above sea level, strong westerly winds and outgoing long radiation (OLR) less than 200 W/M2 over the region.

All conditions for the onset of monsoon over Kerala have been satisfied on Sunday, May 29, 2022, the weather office said in a statement on Sunday.

It noted that cloudiness had increased over the southeast Arabian Sea and adjoining areas of Kerala, while the OLR was 189 W/M2 and westerly winds were blowing at a speed of 25 km per hour.

Conditions were favourable for the further advance of the southwest monsoon into some parts of the central Arabian Sea, remaining parts of Kerala, and some more parts of Tamil Nadu and Karnataka over next three to four days.

The IMD had declared the onset of monsoon over Andaman & Nicobar Islands on May 16 and had forecast a rapid advance over peninsular India towards the end of May.

The ERF shows that the rainfall activity will remain between normal and below normal till about June 8 along these areas.

Only Telangana ( -28%) remains rain-deficient during the pre-monsoon season.