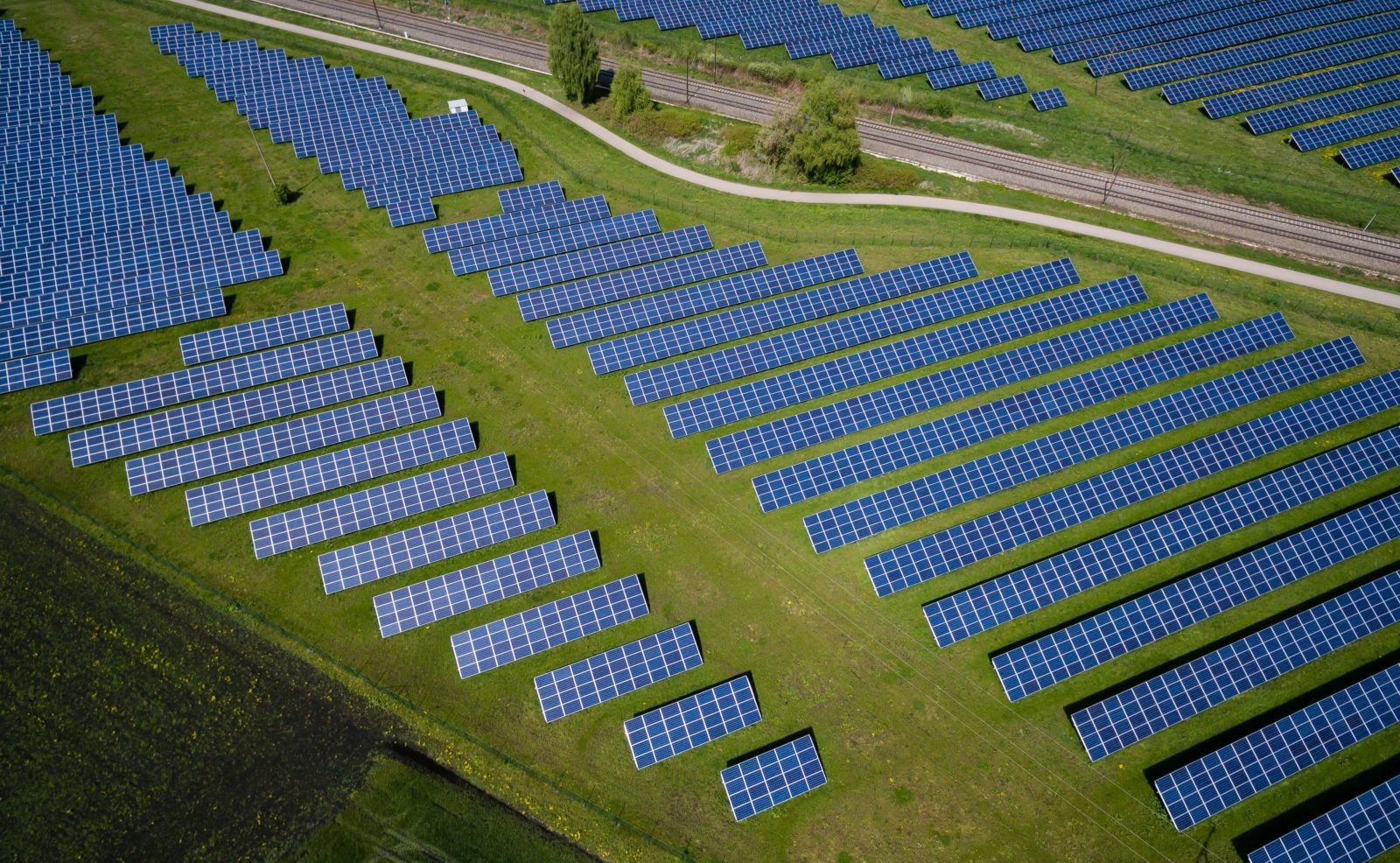 If India were to implement a net-zero target by 2050, an area of at least about 65,000 sq. km – equal to about half the size of Tamil Nadu – is required for large-scale installation of solar and wind power, a new report has found.

The study by the Institute for Energy Economics and Financial Analysis (IEEFA) estimated that solar and wind power infrastructure could together occupy 65,000 to 95,000 sq km. of land, which is 1.97-2.88% of India’s total landmass of 3.28 million sq. km. To put it in perspective, 95,000 sq. km of land is equal to the size of Bihar.

The report notes the potential for land-use conflict that can arise over renewable energy installations, even in sparsely populated areas, slowing the rollout of infrastructure across the country.

A country can be considered net-zero when its greenhouse gas emissions are sequestered either through natural or artificial carbon sinks. According to the United Nations, the entire world has to achieve net-zero emission by 2050 to limit the global temperature rise well below 2º C above preindustrial levels. India is under tremendous pressure to announce its own net-zero targets but it has resisted it so far.

In August 2021, India had said that “reaching net-zero alone is not enough” while stating that developed countries have usurped far more than their fair share of the global carbon budget.

The IEEFA report said that “whether or not India commits to a formal mid-century net-zero emissions goal this year, it will continue adding very substantial solar and wind generation capacity over the next three decades.” It emphasised that part of this capacity “will replace thermal generation, but some will be required to meet population and economic growth.”

Charles Worringham, researcher and guest contributor at the IEEFA, stressed that “the higher end of the land-use range is deliberately generous to allow plenty of leeway for planning.”

“This is a precautionary approach for the purposes of planning and putting in place smart land-use policies today for future renewable infrastructure,” said Worringham, who authored the report, in a statement.

The report considered the land-use implications of India’s energy transition and the important choices about where these resources should be located. It reviewed current land-use studies and then outlines likely future requirements based on the mid-century scenarios presented in recent reports by the Council on Energy, Environment and Water (CEEW), The Energy and Resources Institute (TERI) and Shell, and the International Energy Agency (IEA).

India has ambitious energy transition targets to push for large scale adoption of clean energy. It plans to install a capacity of 175 gigawatts (GW) of renewable energy by 2022 and 450 GW by 2030. However, as the rooftop solar sector has failed to take off, the focus of the Indian government has been on large solar and wind power projects – a move against which experts are expressing concerns due to its potential impact on the affected communities and biodiversity.

Worringham compared the effects of large-scale renewable expansion to those of meeting electricity requirements from additional coal-fired power and noted that the locations for renewable energy generation can be chosen using India’s preferred social and environmental criteria and can be widely distributed across the country.

“Additional coal can only come from already heavily mined districts or from new coal blocks, which are often in significant forest areas and where displacement of Adivasi (tribal) communities is an issue. Nor does renewable energy permanently alter land and natural resources in the same way as coal,” he said.

Pranab Ranjan Choudhury, who is the convener of the Centre for Land Governance, a think-tank working on land issues, said that the minimum land required for renewable energy projects, according to the IEEFA estimate, is more than the geographical area of at least 20 Indian states and union territories (on the individual level and not when put together).

Though the questions around renewable energy’s land use in India emerged over the past few years, it is far from new in other parts of the world. The report highlighted that, as early as 1979, it was explicitly outlined as a potential problem in a report for the U.S. Department of Energy, and it has subsequently emerged as an issue in several countries.

For instance, the Netherlands introduced restrictions on large-scale solar parks in 2019 because of concerns over competition with agriculture while in the Asian region, it has been debated in Indonesia, and in Japan, several aspects of land use for power emerged as concerns in a recent survey of local governments.

Properly managed renewable generation can coexist with other land use

The report explained that the quantity of land required for different types of power generation is of much less importance than what impacts they have, and thus the widespread solar resource, in particular, gives India the opportunity to locate solar generation in a widely distributed pattern, and base decisions about location on multiple economic, social and environmental criteria.

However, by contrast, it said that coal can only be mined where it exists, and any new coal would be heavily concentrated in some of India’s most important forests such as the Hasdeo Arand region in Chhattisgarh, which has been facing severe controversy over the past few years.

For instance, even though thermal power stations are found across India, their fuel supply is heavily concentrated in the eastern coalfields, and their transport networks are fixed. Thus the report explained that India can elect to build a highly distributed network of renewable generation facilities of varying size, placing many close to load centres and existing transmission infrastructure as that would limit the requirement for new power lines and sub-stations, which also occupy land, as well as potentially reducing overall system costs.

“Properly managed renewable generation can co-exist with other land uses, and, unlike coal-based power, it does not fundamentally change land during use or following its ultimate de-commissioning,” said the report.

The report highlighted that though a net-zero India in 2050 is “likely to require less land for renewable generation than some estimates have suggested, the total land area is nevertheless still large and such a major transition should not proceed without policies to optimise land use.” while calling for the Indian government and the State governments to develop a framework that optimises decisions about land use for renewable energy in coming decades, rather than by proceeding with such decisions on an ad-hoc basis.

Explaining further, Choudhury emphasised that land has been at the centre of global debates around achieving net-zero, with an area equivalent to the size of Brazil being estimated to be required to achieve forest restoration targets.

“Given the present land use and users as well as increasing competition and conflicts already witnessed when uses or users are changed substantially, getting this much land will be an uphill task, more so when megaprojects demand them in bigger patches. Even though we have a 30-year timeline, the competitions are only increasing around land uses for food production, infrastructure, housing and urbanisation and adding other layers to this competition can surely bring in more complexity and conflicts,” Choudhury told Mongabay-India.

To address land issues, the report recommended minimising total land use requirements for renewable energy with measures such as the “promotion of offshore wind, rooftop solar, and solar on (mostly artificial) water bodies where net environmental benefits can be assured.”

The caution about carefully choosing artificial water bodies is because India has already experimented with panels above irrigation canals but the report emphasised that it is crucial to identify water bodies where the floating solar produces net benefits (reducing evaporation, preventing algal blooms) outweigh any potential harms (reduced oxygenation, lower photosynthesis, leaching). “Artificial water bodies where water quality is often sub-optimal should be the focus,” it said.

Choudhury stressed that solutions have to be explored which avoid uses and users in terrestrial ecosystems (offshore options). Or they should be choices that integrate energy production into existing land use rationale, as recommended by the IEEFA study.

“A uniformly distributed, decentralised and integrated system of renewable energy production involving smallholder farmers and producers can be an alternative system that must be explored, while also factoring adequately potential ecological and societal costs and benefits,” Choudhury noted.

The report also called for optimising the identification and assessment of land for renewable generation by developing clear environmental and social criteria for rating potential sites, comprehensive assessments and ranking of potential sites against these criteria in advance and independent of tenders or project proposals, incentivising the selection of the highest-ranked locations in tenders, limiting undue regional concentration and supporting widely distributed renewable generation at a range of scales.

It is crucial because India recently achieved an installed capacity of 100 GW of renewable power and the experience so far and the near future plans show that these clean energy projects are concentrated in some regions of the country.