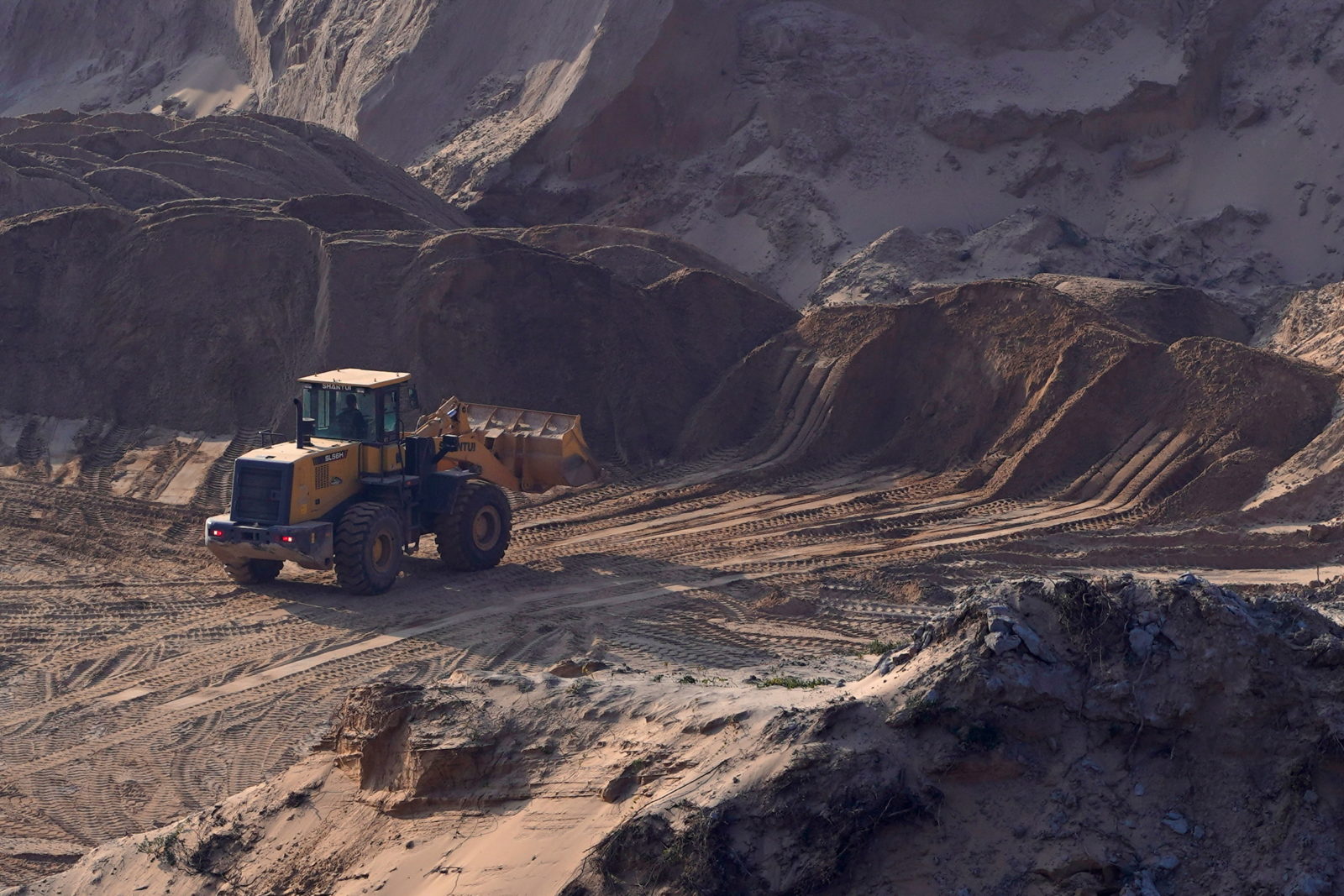 A worker operates a front-loader in an area cleared for sand mining on the dried lake bed of Poyang Lake, Jiangxi province, December 2019. Photo: Reuters/Aly Song

Kochi: The world uses fifty billion tonnes of sand and gravel every year, making it the planet’s second most-used resource after water. And given that there is a water crisis in many parts of the world, it’s not surprising that we’re on the cusp of a sand crisis as well.

The UN Environment Programme (UNEP) published a report on April 26 saying we need to get a grip on our sand extraction and consumption. The report has 10 specific recommendations, including classifying sand as a ‘strategic resource’, mapping and monitoring sand resources, and adopting laws and policies to counter sand greed.

A lot of this applies to India, where sand extraction is a major environmental problem. Both legal and illegal sand mining destabilises river banks and renders them more prone to floods. The demand for sand is driven by rapid urbanisation and a construction boom.

Miners – both loosely organised groups and better-organised mafias – that control sand extraction from rivers and coasts are not uncommon. Workers, activists and journalists have been killed if they opposed the activity while those who stood to benefit from their deaths have faced little to no punishment.

The government, for its part, has specific policies to govern sand mining and its ‘sustainable’ use. But it hasn’t implemented and enforced them properly.

The Union Ministry of Mines calls sand – which is formed by the weathering of rocks – a “minor mineral”. But it’s one of the most major geological resources of the country. According to one estimate, the annual demand for sand in urban India alone was 60 million metric tonnes in 2019.

The Sustainable Sand Mining Management Guidelines, which the Union environment ministry released in 2016, aims to “promote scientific mining of sand and encourage environmental friendly management practices”. It recommends actions to be taken for sustainable sand extraction, emphasises monitoring, and suggests that governments map the district-wise availability of sand.

In 2018, the Ministry of Mines released a ‘Sand Mining Framework’ to help states frame their sand policies.

However, India is extracting sand faster than it can be replenished naturally. According to a UNEP report published in 2018, India and China had the most “critical hotspots” where sand extraction was affecting rivers, lakes and coastlines. This is most likely because of the construction boom in both countries, the report said.

Sand mining affects the natural environment in many ways. A 2010 study found that sand mining in three major rivers in central Kerala had caused the riverbanks to become unstable, increasing the flood frequency and intensity.

When sand is mined, the water becomes more turbid, which in turn affects the water’s oxygen content and the ability of lifeforms to survive in it. Asolekar also said sand loss is a “direct threat for wetlands as it forms a critical ingredient of habitats for waterbirds and their overall ecosystem”.

Sand mining also affects threatened species. As The Wire Science found, villagers in Arunachal Pradesh blame sand and gravel mining in their river for the black-necked cranes fading from West Kameng district, where the birds were once regular visitors. Black-necked cranes enjoy the highest level of protection in Indian law.

All this is why the new UNEP report says governments, industries and consumers should price sand in a way that recognises its true social and environmental value. Keeping sand on our coasts (in the form of beaches) may also be the most cost-effective strategy to adapt to the effects of climate change because sand can protect coasts from storm surges and sea level rise. Such ‘ecosystem services’ should be factored into its value, the report added.

Sand mining in India has also cost human lives. Many activists, police officials and journalists who have probed local illegal sand mining issues have died in the line of duty. Sand ‘mafias’ control sale and export in many states.

An investigation by The Wire in 2017 found that the Indian government’s inaction and collusion between state officials and sand miners allowed illegal sand mining to continue unchecked in coastal Tamil Nadu for three decades. (Sandhya Ravishankar, who conducted the investigation, received threats of physical violence and was also doxed.)

Between January 2019 and November 2020, at least 193 people were killed in connection to illegal sand-mining, the South Asia Network on Dams, Rivers and People estimated in a 2021 report. Most of them – 95 – were people who drowned in the large pits that sand mining leaves behind on river beds. Workers have also died in the process of mining.

The new UNEP report, therefore, specifies that ‘just’ sand transitions – which capture the voices of all people affected by this activity – should be part of decision-making, agenda-setting and action.

According to the 2018 UNEP report, important ways to reduce the amount of sand extracted include avoiding unnecessary natural sand consumption in construction and using alternatives. For example, sand is used as an aggregate for road bases and cement-based construction. This sand can be replaced by aggregating the derivatives of the incineration of solid municipal waste.

Interestingly, the 2022 UNEP report also suggests converting crop residue into building material – which can also help North India manage its stubble burning problem at the end of the rice season.

But the report also said it’s important to properly fund these alternatives. One policy in India could be doing just this, however.

Finally, we also need to enforce existing standards and best practices. In many cases they are never followed: the environment ministry’s guidelines aren’t being enforced and “strong” governance and political will is the need of the hour, Sumaira Abudlali, founder of the Awaaz Foundation, told Down To Earth.