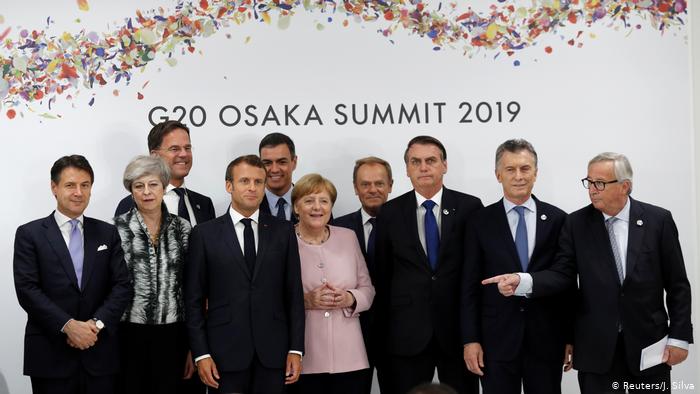 Richard Feynman Was Wrong About Beauty and Truth in Science

“We will have a similar text to Argentina. A 19+1 declaration,” Merkel told reporters on the sidelines of a G20 meeting in Osaka.

Merkel stated that the US accepted the other nineteen members’ determination to fight climate change, but would not be committing to the cause themselves.

Japanese Prime Minister Shinzo Abe confirmed that the leaders had found common ground on climate change despite “big differences” in the members’ views.

At the G20 meeting in Buenos Aires, most countries reaffirmed their commitment to the landmark 2016 Paris Agreement on tackling climate change. They declared the accord “irreversible” and committed to its “full implementation.”

The US, however, said it was committed to withdrawing from the Paris Agreement and “affirms its strong commitment to economic growth, energy access and security.”

Possible goal of ‘net-zero’ emissions by 2050

German Chancellor Angela Merkel praised the agreement, telling reporters in Japan that “this process cannot be turned around.”

Merkel added that some leaders present in Osaka have already indicated they are willing to increase their commitments to curb greenhouse gases by aiming for “net zero” emissions by 2050.

“In our view, climate change will determine the destiny of mankind, so it is imperative that our generation makes the right choices,” said Chinese foreign minister Wang Yi at a news conference with his French counterpart and UN secretary- general Antonio Guterres following the climate change talks.

Abe said the 20 leaders at the G20 summit had also confirmed the need for free, fair and non-discriminatory trade policy.

Abe added said he had told US President Donald Trump and Chinese President Xi Jinping that it was extremely important to engage in constructive discussion to solve their trade tensions.

Following their talks, Trump and Abe said the US and China had agreed to resume trade talks, and Washington would not place any more tariffs on Chinese exports for the time being.