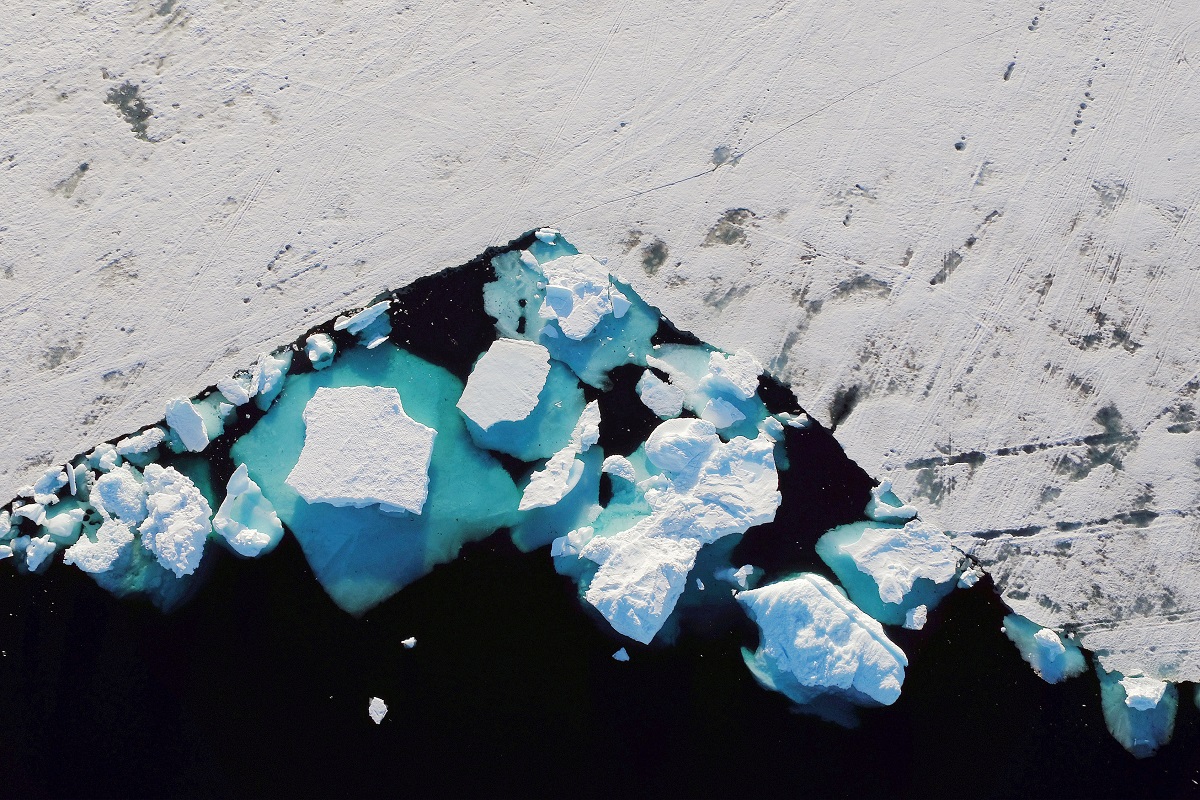 New Delhi: Days after several countries in Europe weathered their highest temperatures in recorded history, Greenland has been gripped by the same heat wave. The country’s ice sheets are melting at an unprecedented rate, contributing to a permanent rise in Earth’s ocean levels.

On Thursday, climate scientists reported that 12 billion tonnes of Greenland’s ice melted. This week alone, 50 billion tonnes of the country’s ice sheet is expected to melt. This would be enough to permanently increase the world’s sea levels by 0.1 mm, while the melt from the ice sheets in July contributed to a rise of half a millimetre in global sea levels.

The Naujatkuat River in West Greenland running high in end of July, my gauging station is perched on the bedrock. With the exceptional heat wave coming I have my fingers crossed for it not being washed away. pic.twitter.com/JPofxDIELN

While these measurements may not seem alarming if seen in isolation, scientists warn that such events are becoming increasingly common. The cumulative effect of Greenland’s ice melt – the single largest contributor to sea level rise – will prove disastrous to coastal communities over the next few decades.

Meteorologist Eric Holthaus told CNBC, “The fact that we are getting measurable sea level rise out of a single day of melt is shocking.” He said the “real and lasting consequences” from this single heat wave will last for “thousands of years”.

This week, Greenland is enduring its biggest meltdown in recorded history. This summer has surpassed 2012 and is now unlike any other in at least 1,000 years.

We are in a climate emergency.

My latest for @RollingStone, on what this all means:https://t.co/WUL0v2CW8O pic.twitter.com/1f8BXRls93

In natural course, the ice melted during the summer is gained through snowfall in the winter. However, climate change and rising global temperatures have disrupted this cycle, ensuring that the loss is higher than the gain.

This is a roaring glacial melt, under the bridge to Kangerlussiauq, Greenland where it’s 22C today and Danish officials say 12 billions tons of ice melted in 24 hours, yesterday. pic.twitter.com/Rl2odG4xWj

The only comparable event in recorded history is the melt of 2012, when for a few days, 97% of Greenland’s ice sheets experienced melting. The current heat wave is likely to surpass the 2012 melt. Jason Box, an ice climatologist, said the current melt is 1.2 times that of the 2012 event.

And this is a first approximation of where melt occurs across the #Greenland #icesheet – here you can see that almost all the ice sheet, including Summit, except for the South Dome and parts of SE Greenland look to have melt ongoing. https://t.co/KtWlQ7mXzA

Holthaus wrote in Rolling Stone that the current melting scenario hints that the UN Intergovernmental Panel on Climate Change (IPCC) may have to revise its projections of temperature rise. The amount of ice lost by Greenland in July – 160 billion tonnes – is what the IPCC projected a typical summer in 2050 would cause under a worst-case warming scenario. Reality was off by three whole decades.

In the 1980s, scientists similarly underestimated the effects of climate change as Greenland’s summer melt was balanced by winter snow. Scientists estimated that it would take “thousands of years” for the ice to completely melt because of global warming.

Also Read: How Can You Tell When a Glacier Is Dead?

Recent studies show that the country passed a ‘tipping point’ in 2003. Between 2003 and 2012, the rate of melting quadrupled. Worse, the accelerated melt came from southwest Greenland, an area not known to be losing ice rapidly.

An Indian summer in the Arctic

Greenland, and the Arctic region are experiencing some of their hottest months. Unusual wildfires have been raging in several ice-capped regions of Alaska, Canada, Russia, and even Greenland. Again, though wildfires triggered by lightening are observed in the region, their frequency is accelerating.

Wildfires are causing the release of large amounts of carbon dioxide. Between June 1 and July 21, the wildfires are estimated to have released roughly 100 mega-tonnes of carbon dioxide into the atmosphere, according to the Copernicus Atmosphere Monitoring Service. This is roughly Belgium’s total carbon output for 2017.

These fires, seen in harmony with the Arctic sea ice receding, will have alarming effects on the Earth’s ecosystem. As of July 15, Arctic sea ice extent was 1.91 million sq. km below the 1981-2010 average.

The Hindu Kush Himalayan (HKH) ranges are also warming, with 15% of its glaciers already disappearing. Recent reports suggest that even a best-case scenario cut in global emissions could melt at least a third of the glaciers by 2100. As The Wire had reported in February, this could put the lives and livelihoods of 1.65 billion people living in downstream river basins of the ranges at threat.

Also Read: Two Thirds of Glaciers in the Hindu Kush Himalaya Could Melt by 2100

If emissions are not cut and warming trajectories continue at current levels, two-thirds of all glaciers in the HKH would disappear by the end of the century. As The Wire reported, though the region’s per capita carbon dioxide emission is just one-sixth of the global average, “it will have to bear significantly higher impacts”.

Ranging from Aghanistan to Myanmar, the HKH covers over 3,500 kilometres and is home to 250 million people. Around 1.65 billion people rely on the rivers that originate in the HKH ranges, often called the world’s ‘third pole’ because they hold the most ice outside of the Antarctic and Arctic regions.