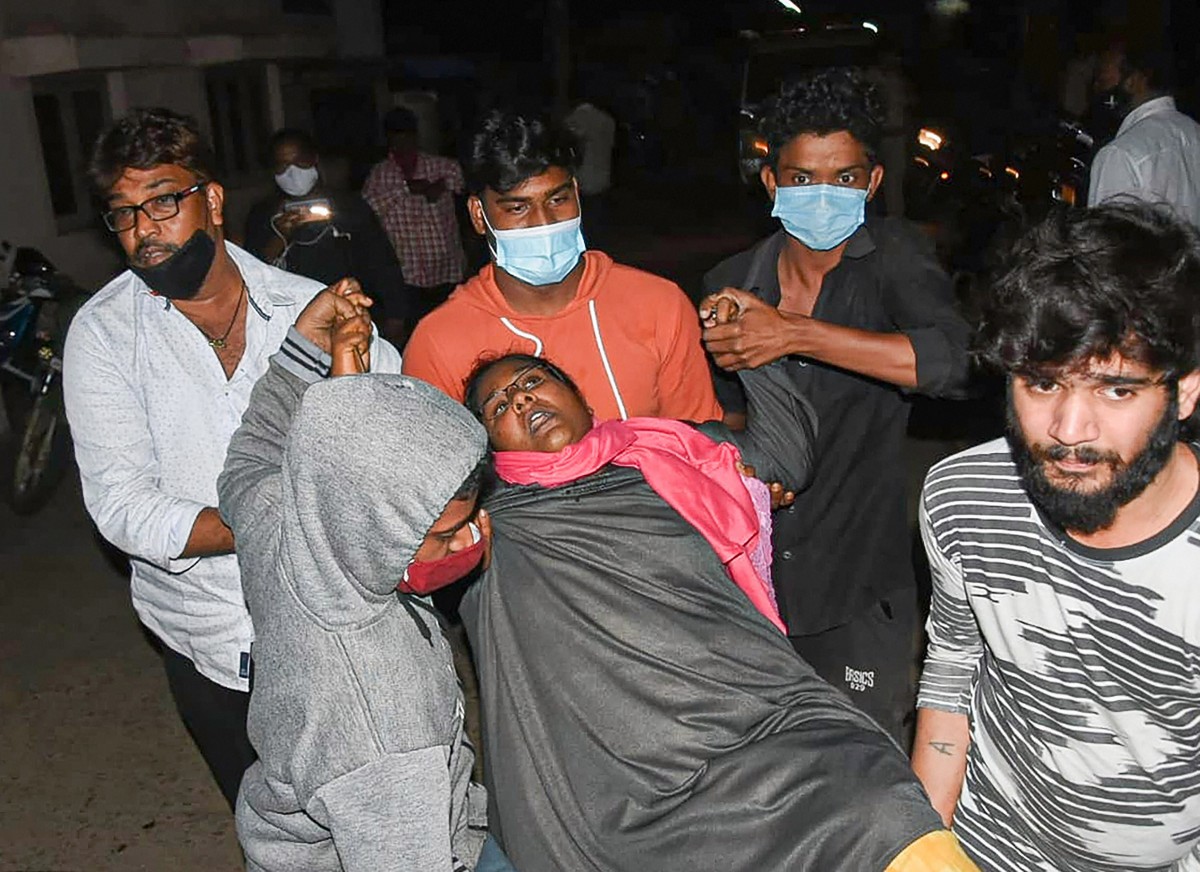 More Fun Than Fun: In the Wild, There’s More Than One Way to Find a Mate

A woman showing symptoms of epilepsy being taken to a hospital in Eluru, West Godavari district, December 6, 2020. Photo: PTI.

Eluru: High presence of lead and nickel in blood and pesticide in drinking water was detected as sample tests were conducted to determine the cause of the mysterious disease that began spreading here since Saturday night.

E-Coli in water was found to be normal while culture test of cerebral spinal fluid turned negative for known viruses and bacteria, an official report said here on Tuesday.

However, a comprehensive report on the causative agents that triggered the disease outbreak could come out only in about a week even as teams from different agencies and institutions went about collecting samples of water, food and blood for a detailed analysis of possible carcinogenic residues.

The AIIMS experts who conducted a preliminary examination of blood samples made out that lead and nickel particulate matter could be the root cause of the mysterious disease, which has claimed one life and left over 561 people sick.

Compared to Monday, the spread of the disease was low on Tuesday as only 73 new cases were reported in a day.

Another team from AIIMS, New Delhi, was examining how the heavy metals crept in, by examining the water and food samples.

Hyderabad-based Centre for Cellular and Molecular Biology has sought stool and bile samples of the victims for a viral and bacteriological analysis.

“These results are awaited,” the official report said.

Based on the preliminary findings of the expert teams from AIIMS and other state and Central institutions, health officials presented a report to Chief minister Y.S. Jagan Mohan Reddy here today.

A CMO release said lead and nickel were found to be the causative agents for the mysterious disease, citing a report prepared by the AIIMS experts.

The disease saw people suddenly falling unconscious after suffering from fits and nausea since Saturday night.

The symptoms, according to GGH doctors, included a bout of epilepsy for 3-5 minutes, memory loss for a few minutes, anxiety, vomiting, headache and back pain.

“The Chief Minister directed the authorities to conduct a thorough investigation on the heavy metal content in the patients bodies and constantly monitor the treatment process,” the CMO release added.

According to the health authorities here, of the 561 people infected, over 450 had recovered and another 81 were being treated in the hospital.

Another 29 people were sent for better medicare to government hospitals in Vijayawada and Guntur but 20 of them had recovered.

Apart from a two-member expert team deployed by the World Health Organisation, a three-member team drafted by the Union Ministry of Health and Family Welfare arrived in Eluru on Tuesday and went round the affected areas to collect samples.

Deputy chief minister (health) A.K.K. Srinivas said the affected people were recovering well and there was no need to panic.

“Full details as to what triggered the mysterious disease will be known only after the central agencies submit their reports. Primarily, lead has been found to be the cause of the outbreak,” he said.

A special sanitation drive was undertaken in Eluru city and also in the adjoining rural pockets and Denduluru from where the cases were reported.

Srinivas, who represents Eluru, went round the localities on Tuesday and inspected the overhead drinking water reservoirs and supervised the sanitation drive.