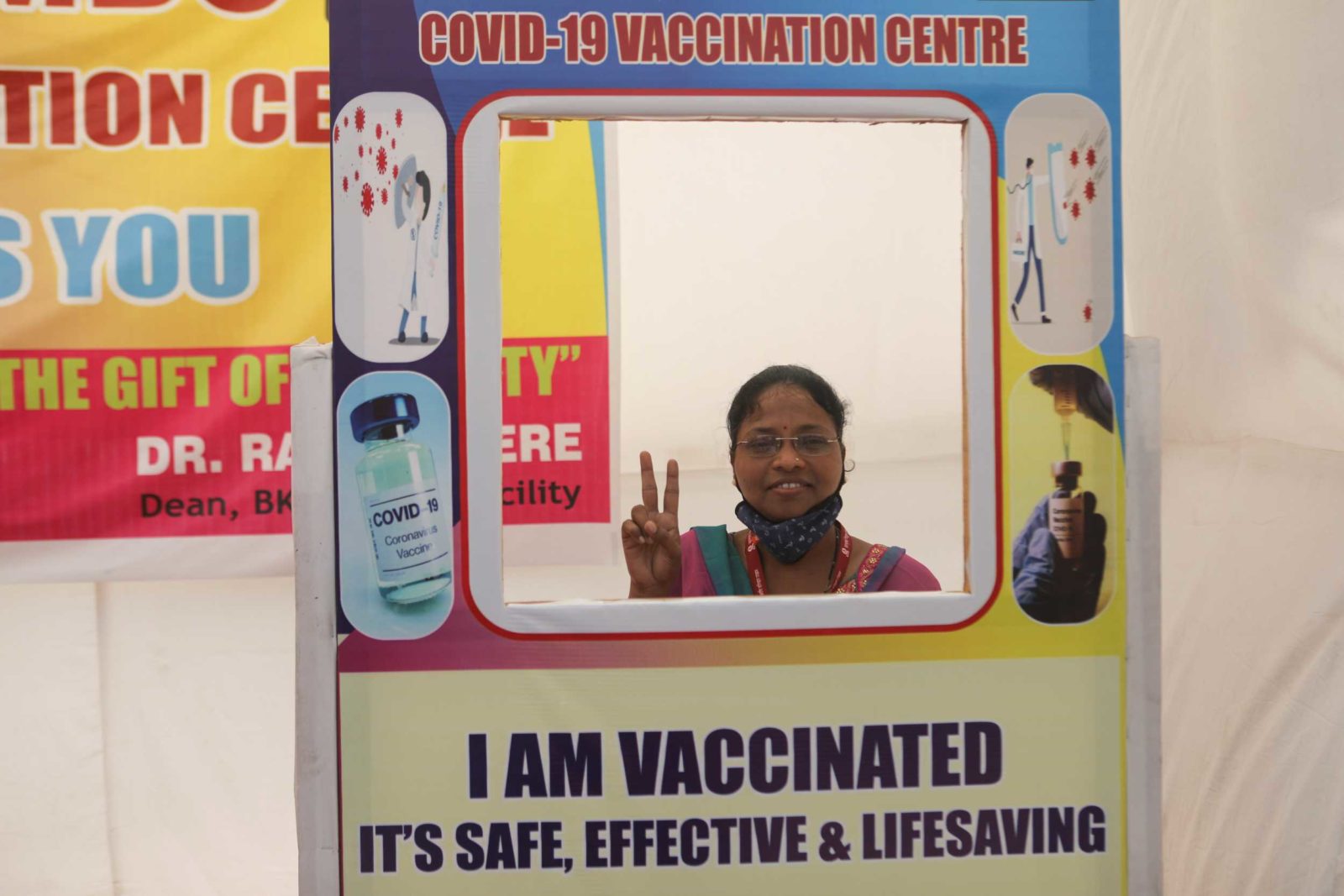 A women poses after getting vaccinated in Mumbai. Photo: Reuters/Francis Mascarenhas/Files

New Delhi: In several instances across the country, the COVID-19 vaccine drive has seen a few glitches, mostly because of the government’s Co-WIN app. The app is meant for doctors and healthcare workers who are involved in administering the vaccine. For individuals to register themselves, they must visit the Co-WIN portal (but not download the app).

The government launched the second phase of the coronavirus vaccination drive on Sunday, opening up slots for everyone above the age of 60 or those above 45 who have one or more of listed comorbidities.

In Bengaluru, for instance, The News Minute reported that several hospitals – both public and private – had to delay the vaccination process because the app wasn’t working as it should. “There are many people who reached our hospital well before 11:30 am, when the drive is set to begin. However, the app was not opening from our end. They brought their credentials after registering but we were not able to do the verification,” an officer at KC General Hospital told the website.

CV Raman Nagar Hospital officials said they faced so many “hiccups” on Monday, that they decided to postpone the vaccinations to Wednesday. Other hospitals in the city too reported issues on the first day, The News Minute said.

According to the Times of India, Karnataka has no death of vaccinations – there are 3.4 lakh vials of Covaxin in the state’s storage unit, still unused.

Several citizens across the country also faced issues while registering on the Co-WIN portal, and were unable to complete the required OTP verification. According to Firstpost, messages like “Unexpected Error” as well as “Cowin server is facing issues. Please try later” showed up for a number of people. Reports suggest that these issues have now been largely resolved.

There was also confusion among citizens on the first day on whether they should be using the app or the website. The government has clarified that citizens must only use the web portal, and not the Co-WIN app.

The BJ Medical College and Sassoon General Hospital in Pune also saw delays because of Co-WIN glitches, according to the Indian Express. Officials said that the updated digital platform CoWin 2.0 was not able to verify the age of the beneficiaries who had self-registered.

In Delhi too, there were complaints of long lines and waiting despite having self-registered. “So, we came here to Sir Ganga Ram and have been sitting in the lounge area as the authorities don’t have our names, but when I registered online, it did say confirmed,” Colonel (retired) Sanjay Mahajan, who had gone with his 80-year-old mother to get vaccinated, told The Print.

Max Hospital in Delhi too reported issues with the portal. “The CoWIN system is only giving forenoon and afternoon slots and no specific time band…This has to be sorted to avoid crowding,” Dr Sahar Qureshi, medical superintendent, Max, told Business Standard.

In Mumbai, according to the Hindustan Times, Co-WIN glitches led to crowding at the Bandra-Kurla Complex vaccination centre. “There was some technical glitch in CoWIN portal due to which, there was crowding at BKC vaccination centre.But the glitch was resolved by 11:20 am, and the crowd is under control now,” Rajesh Dere, dean of the BKC centre, said on Monday afternoon.

The Central government, however, insists that Co-WIN has been functioning well, and the only issue is because people have been looking for an app instead of visiting the portal. “There were some glitches in the first version of the software that we unveiled on 16 January but yesterday (1 March) there were none. Just that people were looking for an app and they happened to find one that looked authentic but that was not made for that purpose,” Dr R.S. Sharma, head of the empowered group on COVID-19 vaccinations, said on Tuesday.

“We issued a clarification that there is no CoWin app but registration is either through the portal of that name or the Aarogya Setu app … there may have been some issues but if they were major, then so many people would not have been able to register in a single day,” he continued.

Sharma also said that a system has been put in place to monitor user experience on the Co-WIN portal, The Print reported.