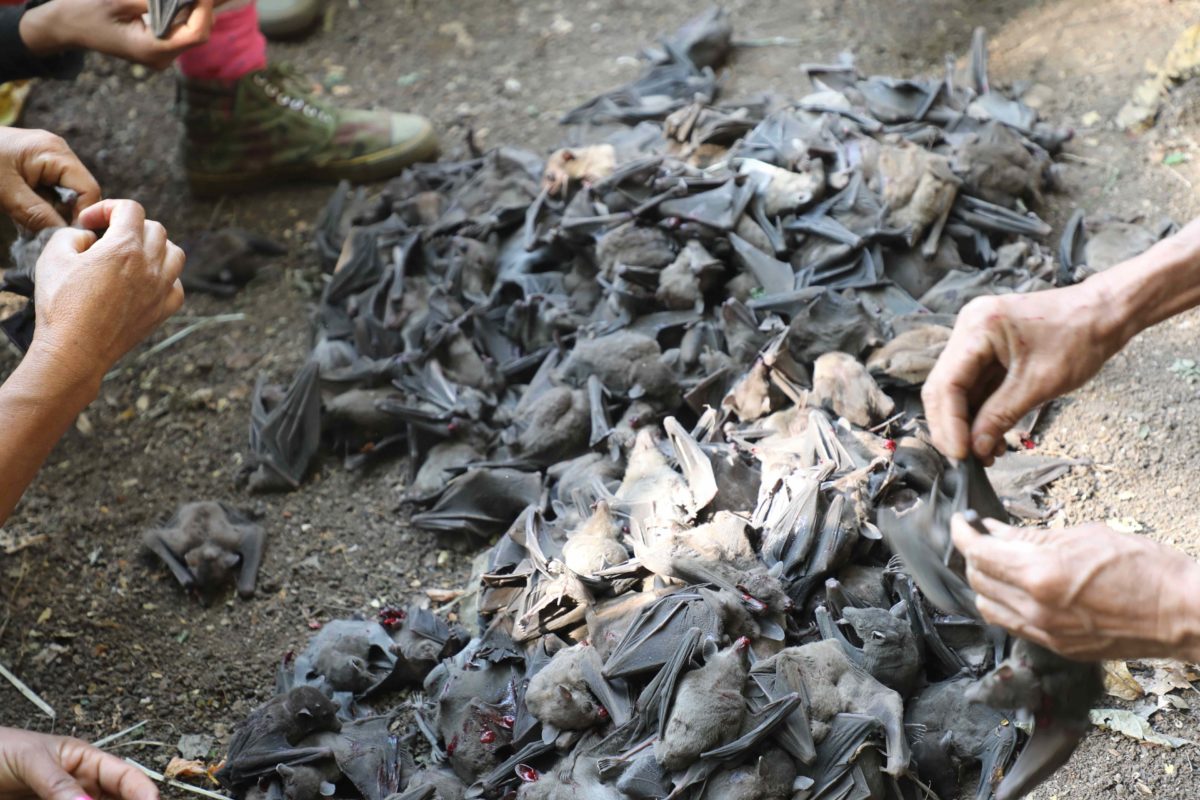 Chaos at UN Climate Conference as Governments Refuse to Act

Up in the mountains of Nagaland, in Mimi village, bordering Myanmar, village elders recollect that in the late 1970s, there was an outbreak of a “mysterious disease” that claimed more than 80 lives between mid-October to mid-November.

Around the same time each year, the Bomrr clan, a clan of the Longpfurii Yimchungii sub-tribe, smoke out and harvest between 7,000 to 25,000 cave-dwelling bats, a traditional practice that has been carried on for seven generations. The clan considers the bats to be of medicinal value.

These mammals are an essential part of our ecosystem because they are major pest control, pollination, and seed dispersal agents. They are also known to be natural reservoirs for several severe viral diseases, such as rabies, Marburg, and Nipah.

Could the mystery disease be linked to the annual bat-hunting practice that wiped out 10 percent of the unsuspecting human population three decades ago?

“The outbreak caused the villagers to migrate to new areas, resulting in the spreading-out of the village population. Even today there are unofficial reports of sporadic disease outbreaks. There are no official records. We can not say for sure that it (the deaths) was linked to bat harvest,” said Pilot Dovih of National Centre for Biological Sciences, Bengaluru, India.

Also read: A Fluorescent Protein in Jellyfish Could Help Understand Diseases Like HIV and Ebola

“We have to be very careful because there may be retaliation against the bats,” cautioned Dovih who is studying the potential virus spillovers from bats to humans in Nagaland, where disease outbreaks are unreported due to remoteness of the region and lack of proper health care facilities.

Dovih is the lead author of a recent study published in PLoS One that shows two species of bats, as well as humans engaged in hunting these bats, were found to have been exposed to viruses in the family Filoviridae, which includes Ebola and Marburg viruses.

“Although antibodies against two and three distinct filoviruses were found in the human and bat blood samples, respectively, no viral genetic material was detected in the samples,” said Dovih.

The study reports the presence of filovirus (e.g. ebolavirus, marburgvirus, and dianlovirus) and reactive antibodies in both human (e.g. bat hunters) and bat populations in northeast India, a region with no historical record of Ebola virus disease.

The two bat species studied are the cave nectar bat (Eonycteris spelaea) and Leschenault’s Rousette (Rousettus leschenaultii). They are among the bat species commonly hunted by the indigenous community in Mimi village. These two bat species have previously been identified from studies in China to harbour Hendra virus and Nipah virus. A recent study in Bangladesh has also reported Ebola virus antibodies in Rousettus leschnaultii individuals, said Dovih.

The researchers suspect that bat hunters may have been exposed to filoviruses potentially originating from bats during the harvest that exposes them to saliva, blood, and excreta from the bat species over a period of two to three days. The clan claims ownership of the caves and also the right to conduct this annual bat harvest festival.

“Our results indicate the circulation of several filoviruses in bats and the possibility for filovirus transmission from bats to humans. Our findings suggest bats in South Asia act as a reservoir host of a diverse range of filoviruses and filovirus spillover occurs through human exposure to these bats,” the authors underscored.

Infectious diseases spilling over from wildlife are not new – as of 2008, approximately 70 percent of all known emerging diseases are thought to have originated from wild animals. In the last 50 years, several viruses, such as Ebola, Marburg, Severe Acute Respiratory Syndrome (SARS), Hendra, swine flu, and Nipah have appeared in areas with close human-animal contact, a statement said.

Tropical areas where hunted wildlife often supplements the locals’ meager diets – such as in Africa, South and Southeast Asia – are hotspots for pathogen spillovers. During such spillovers, viruses from hunted wild animals or ‘bush meat’ infect humans and can lead to large scale outbreaks.

Barbara Han, a disease ecologist at Cary Institute of Ecosystem Studies, who was not associated with the Nagaland-based study, called the results interesting.

“Eonycteris speleae is a species that we predicted in 2016 should be capable of carrying filoviruses, though at the time it had never been found positive. A few months after our study was published, however, this paper confirmed a new filovirus in that species in China. This new study in PLoS One suggests the possibility they are acting as the spillover reservoir causing human seropositivity,” Han told Mongabay-India.

Spillover reservoir refers to a wild host in which a pathogen circulates naturally without overt disease (reservoir), and from which the pathogen may be transmitted to humans to cause infection or disease (spillover).

Han co-authored a study that used machine learning to flag four new bat species that could be the additional hosts of the deadly Nipah virus, as surveillance priorities. Two of these species are found in the state of Kerala, where an outbreak in 2018 claimed 21 lives.

“It’s not clear whether the reservoir is actually causing human infection in northeast India, but the study shows evidence of human exposure (an antibody response to the same filoviruses that are circulating in certain bats),” Han told Mongabay-India.

Dovih reinforced the need to select sentinel sites for virus surveillance at the human-animal interface and highlights some of the gaps in our understanding of filovirus transmission and ecology. The researcher is working with the communities to generate awareness.

“We are doing similar studies in a village in Arunachal Pradesh where the local community has been hunting bats for the last nine generations. And when we visit communities to collect samples we just don’t limit ourselves to that. We are engaging the communities in remote areas to understand these issues,” said Dovih.

Because of its rich biodiversity, (northeast region is part of Himalaya and Indo-Burma biodiversity hotspots), communities live in close proximity to wildlife. “People still hunt wildlife and many villagers don’t understand there are a Wildlife Protection Act and other laws.”

Given the cultural and traditional linkages, diversity of dialects and remoteness, community outreach is quite challenging.

“In cities and towns in Nagaland people still understand. But if you go to these remote villages people still don’t care whether bats carry diseases or not but there are a few people who understand now. We can’t force them to stop hunting because that’s part of their culture so we interact them on a regular basis to generate awareness,” added Dovih.

For the study, researchers collected blood samples from 85 individuals (who participated in the annual festival in Mimi village) and the two species of bats, in 2017. The participants were provided with a paper-based survey to record their gender, age, occupation, and the number of times involved in the bat harvest.

Based on next-generation sequencing and serology, researchers said the cave nectar bats are the “most probable source” of the viral spillover event.

Despite the growing evidence that filoviruses are present in South and Southeast Asia, there has been a historical absence of outbreaks of filovirus haemorrhagic fever in this region.

Reasons why clusters of human filovirus infections have not yet been detected in Asia, include ecological barriers prevent zoonotic transmission, viruses are unable to sustain transmission between humans or an uncharacterised diversity of non-pathogenic, antigenically-related filoviruses exist and cause asymptomatic infection in humans.

Human populations with wildlife contact and no history of Ebola virus disease in Uganda and the Democratic Republic of Congo were reportedly ebolavirus seropositive, the paper mentioned.

“For Mimi village in Nagaland, geographical barriers such as poor roads may have also acted as barriers. The interaction between neighbouring villages is also restricted because of the terrain,” observed Dovih.

The researcher batted for the need to strengthen the One Health Initiative in India. ‘One Health‘ is an approach to designing and implementing programmes, policies, legislation, and research in which multiple sectors communicate and work together to achieve better public health outcomes.

The areas of work in which a One Health approach is particularly relevant include food safety, the control of zoonoses (diseases that can spread between animals and humans, such as flu, rabies and Rift Valley Fever), and combatting antibiotic resistance (when bacteria change after being exposed to antibiotics and become more difficult to treat).

This article was originally published on Mongabay and is republished here under the Creative Commons licence.