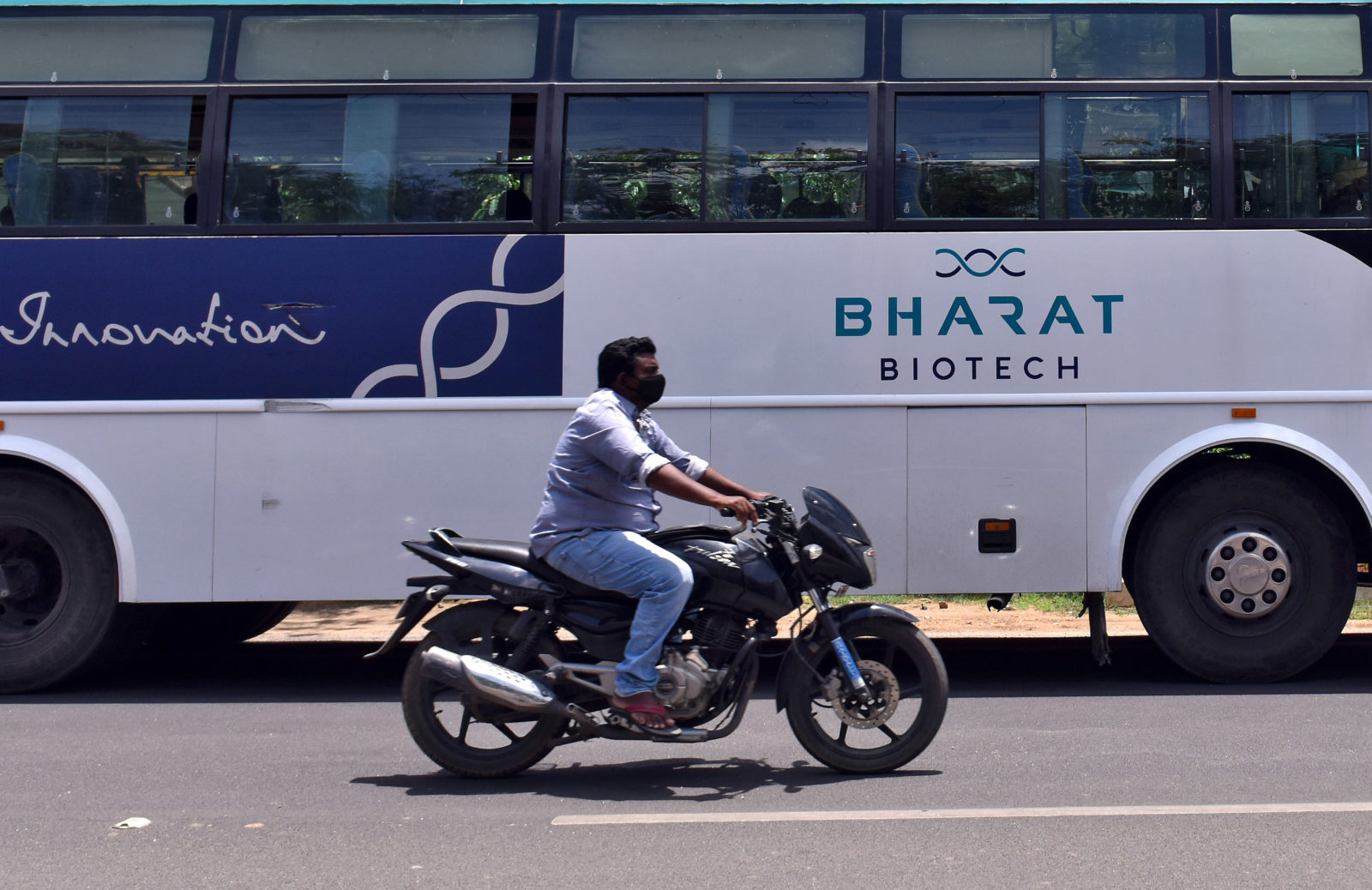 A bus with the Bharat Biotech logo on it in Hyderabad. Reuters

Bengaluru: A top executive at Bharat Biotech, the Indian biotechnology company, has defended its COVID-19 vaccine candidate, approved for emergency use by the government, and said it will produce efficacy data from late-stage trials by March.

The vaccine, ‘Covaxin’, received emergency use approval from India’s drugs regulator on Sunday, but the move faced questions after the regulator took the step without publishing information about its efficacy.

Ella highlighted the company’s experience and expertise in producing vaccines, its numerous patents and its presence in 123 countries.

The approval for Covaxin, jointly developed with a government institute, was hailed by Prime Minister Narendra Modi and his ministers as a success in India’s self-reliance push.

Efficacy data from the company’s ongoing late-stage trial should be available by March, Ella said.

Health Minister Harsh Vardhan clarified on Twitter on Sunday that the emergency use approval for Covaxin was “in clinical trial mode”, wherein all recipients of the vaccine would be tracked and monitored as if they were in trial.

India has the second-highest number of coronavirus infections in the world, though cases have been steadily falling since a peak in September.

India also approved the use of a vaccine developed by AstraZeneca and Oxford University which will be the lead vaccine in the country’s immunisation programme.

The Wire Science@TheWireScience
3 Following 14.4K Followers
Astronomers have identified lakhs of galaxies – and only around 800 have radio jets bigger than 700 kilo-parsecs in… https://t.co/AY9joyVp9Q
6 hours ago
ICYMI: Though the strains, which are missing one or two key genes present in the wild African swine fever virus, do… https://t.co/sHt19vvdRV
7 hours ago
1
Astronomy and physics, which offer glimpses of the farthest reaches of the universe and perhaps shed light on ancie… https://t.co/R8qydbmJly
8 hours ago
During the COVID-19 pandemic, PhD students lost precious data needed to conclude their theses and meet project obje… https://t.co/fq160Cattp
19 hours ago
5 5
It's true that the nilgai is responsible for significant damage to crops across large parts of northern India. Howe… https://t.co/hwufzaci3i
20 hours ago
1
ICYMI: India has gifted vaccine candidates to neighbours and partners such as Bangladesh, Nepal, Bhutan, Seychelles… https://t.co/EAIZHCOqXk
21 hours ago
Though none of India’s territory directly falls in the Arctic region, it is a crucial area as the Arctic influences… https://t.co/Nyl75CBWTG
24 hours ago
2 2
Egypt has unveiled a significant new archaeological discovery at the Saqqara necropolis south of Cairo, including 5… https://t.co/ishg5D2y3U
1 day ago
2 6
The division bench said, “Out of six members at least four members may not have expertise. Was there an application… https://t.co/yAADRkOafc
1 day ago
2 4
In a new series, Shyama Rajagopal @ShyamaRaj10 will focus on the ground realities of Ayurveda as it is practiced to… https://t.co/JHXgu29q7t
1 day ago
1 4
The Rajasthan government's decision to scrap middle agents between itself and private clinics is worrisome because… https://t.co/Cn6siTiRRC
1 day ago
4 4
A paper published in The Lancet on January 21, 2021, describes the results of Covaxin’s phase 1 clinical trial. Muc… https://t.co/z3sw9SOBZt
1 day ago
13 27
Only a third of Indians surveyed said they wanted to get vaccinated right away. https://t.co/Fu0E4kFZJs
3 days ago
3
ICYMI: Washington formally left the Paris accord last year but its role as a heavyweight in global climate negotiat… https://t.co/zGdzcR9Gcf
3 days ago
If claim after claim fails to live up to the hype that surrounds it, scientists worry that the public will feel let… https://t.co/UYsFOXoPFq
3 days ago
3 3
Contact us