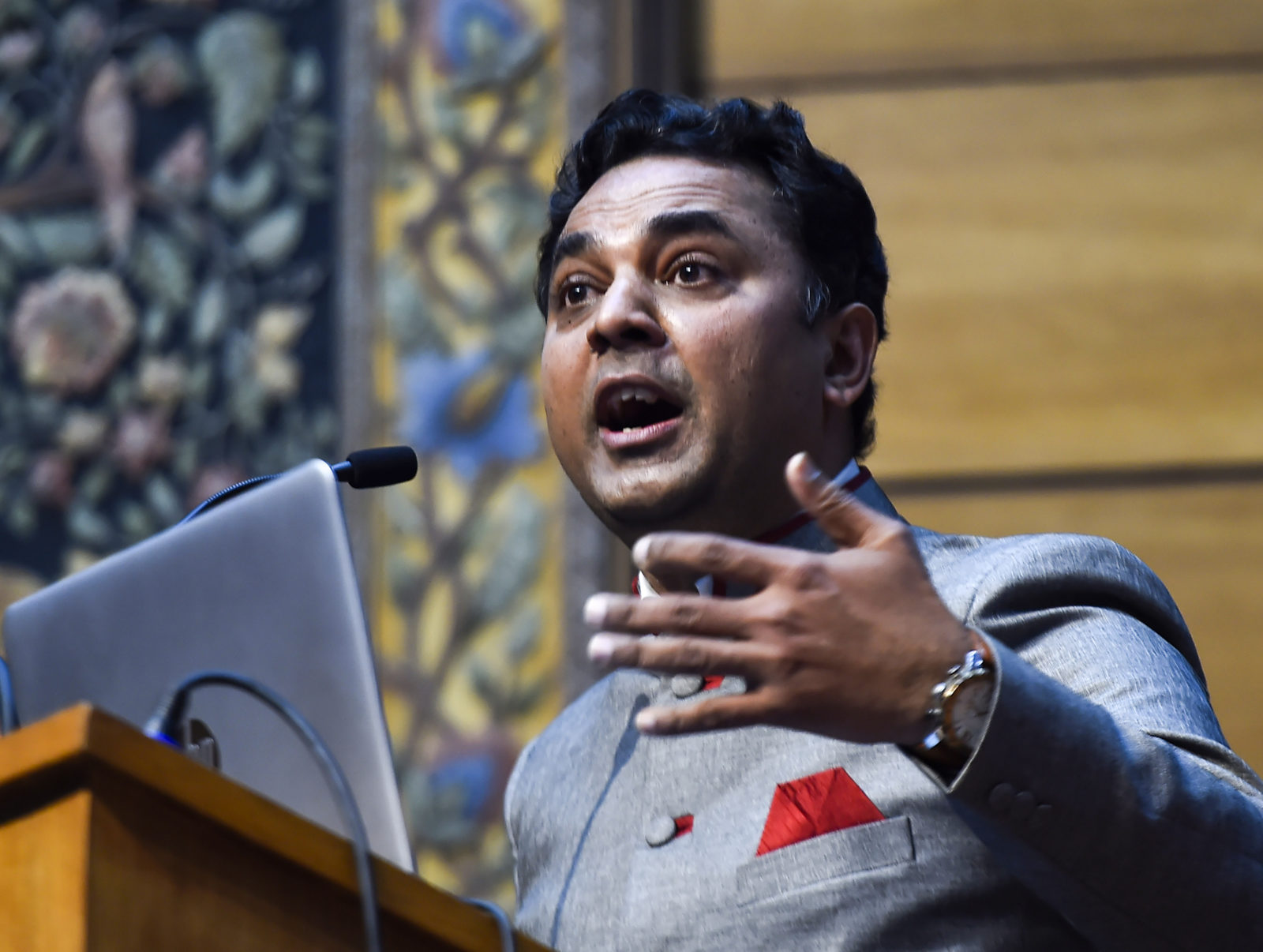 The Economic Survey 2020-2021, released earlier today by chief economic adviser Krishnamurthy V. Subramanian, begins with a staunch defence of the national lockdown Prime Minister Narendra Modi imposed in March 2020, ostensibly to slow the spread of the novel coronavirus and save lives.

Subramanian continues this narrative in the document (ch. 1, vol. 1), whose various lines can be classified into one of three categories: sensible, debatable and bizarre, presented below in this order. Editor’s notes have been added in italics.

* The virus would be transmitted faster when people live in close vicinity or work in close physical proximity in factories, or in service sectors with face-to-face interactions with the public. Two important factors that, then, become significant are the absolute population and population density. This is because higher the proximity between people, higher is the likelihood that an infected person carrying the virus will make contact with a susceptible person. Transmission events occur through contacts made between susceptible and infectious individuals in either the household, workplace, school or randomly in the community, with the latter depending on spatial distance between contacts.

* … denser areas are more vulnerable to faster spread of the virus and this effect is stronger at the onset of the epidemic. This had important policy implications in terms of early measures to prevent spread for a densely populated country like India with more than 130 crore people and a population density of 382 persons per square km versus the global average of 58 persons per square km.

* At the onset of the pandemic in January, 2020, India did less than 100 COVID-19 tests per day at only one lab. However, within a year, 10 lakh tests were being conducted per day at 2305 laboratories. The country reached a cumulative testing of more than 17 crore in January, 2021. The sharp decline in the number of days to add the next cumulative 1 crore tests show the dedicated efforts to expand the testing infrastructure.

* Ferguson et al, 2020 show that optimal mitigation policies (combining home isolation of suspect cases, home quarantine of those living in the same household as suspect cases, social distancing of the elderly and others at most risk of severe disease and use of masks, sanitization and handwashing) might reduce peak healthcare demand by two-thirds and deaths by half. In this scenario, population immunity builds up through the epidemic, leading to an eventual rapid decline in case numbers and transmission dropping to low levels. However, the resulting mitigated epidemic would still likely result in hundreds of thousands of deaths and health systems (most notably intensive care units) being overwhelmed many times over – given that CFR for COVID-19 was high.

CFR is a function of the healthcare system and is not an implicit property of the disease. For example, if healthcare is inaccessible or of low quality, the CFR will increase automatically.

* Given the uncertainty and potency of the COVID-19 virus, it was prudent to learn from any earlier experience. The Spanish flu pandemic of 1918-19, was one of the deadliest in world history with peak of worldwide mortality in modern times, as it infected around 500 million persons, or about one-third of the world’s population, and killed anywhere from 50 to 100 million people (Barro et al, 2020). Like COVID-19, the Spanish flu was highly contagious; it was also unusually lethal for young, “prime-age” adults, especially men.

No lessons learnt from the more recent HIV, TB and influenza pandemics? The first two are still ongoing as well.

* The districts across India, based on number of cases and other parameters were classified into red, yellow and green zones. Across the country, ‘hotspots’ and ‘containment zones’ were identified – places with higher confirmed cases increasing the prospect of contagion. This strategy was increasingly adopted for intensive interventions at the local level as the national lockdown was eased. This enabled a smooth transition to ‘Jaan bhi aur Jahan bhi’.

‘Strategy’ and ‘smooth’ are both overstatements. See this analysis here by economists Jyotsna Jalan and Arijit Sen.

* India, in fact, has been an outlier in its experience with COVID-19. It reached its first peak in mid-September, after which rising mobility has been accompanied with lower daily new cases. Globally, many European countries and US have been facing deadly second and third waves around this time with easing of lockdowns and increasing mobility. Most countries had to re-impose intermittent lockdowns while India has been increasingly unlocking. These trends reinforce that India has been effective in combating the COVID-19 pandemic.

A straightforward point but discussing it without considering the costs and impact on small businesses and the poor cannot be useful.

* India’s policy response to the pandemic stemmed fundamentally from the humane principle advocated eloquently in the Mahabharata that “Saving a life that is in jeopardy is the origin of dharma.” Therefore, the “price” paid for temporary economic restrictions in the form of temporary GDP decline is dwarfed by the “value” placed on human life.

The government didn’t have a plan for migrant labourers until the exodus began, and even then many of the latter were caught between different rules between states and a crushing lack of transport.

* India’s policy response valuing human life, even while paying the price of temporary GDP decline, has initiated the process of transformation where the short-term trade-off between lives and livelihoods is converted into a win-win in the medium to longterm that saves both lives and livelihoods.

* The clear objective of ‘Jaan Hai to Jahan hai’ and to ‘break the chain of spread’ before it reaches ‘community transmission’ helped the government face the dilemma of ‘lives vs livelihood’, pace the sequence of policy interventions and adapt its response as per the evolving situation.

Community transmission was rife in India, at least according to anecdotal reports compounded by the government’s stubborn refusal to admit the possibility despite all evidence pointing to the contrary. This was especially so in parts of Maharashtra, Tamil Nadu, Kerala, Andhra Pradesh, West Bengal and New Delhi at different times. See here.

* Survey has analyzed if the policy response across countries was effective in controlling the spread of the pandemic and associated fatalities across countries. To assess this, the counterfactual is estimated, i.e., what would have been the natural caseload and associated fatalities purely based on the population, population density and the demographics of the population. … The analysis shows that India has been able to effectively manage both the spread of COVID-19 and the fatalities. India has 37.1 lakh less cases than what was estimated by the model while the actual cases in US are more than the estimated cases by 62.5 lakh cases.

The government’s go-to defence last year: “If we hadn’t done what we did, things would have been much worse. So think about that when you judge us. Forget about how good it could have been.” See this analysis.

* Collating the results of the analysis with the stringency of lockdowns across countries show that higher initial stringency in countries in March-April, 2020 had a significant impact on controlling the number of confirmed cases and deaths (at 10 per cent level of significance). India has been a clear outlier both in cases and deaths.

Subramanian suddenly ignores the distinctively age-specific outcomes of COVID-19 and tends towards claiming that the lockdown saved all lives. This argument also ignores how access to other medical care during the lockdown nosedived, adversely affected outcomes of people with other ailments. See here for more.

The word ‘Gujarat’ features exactly twice in the document – and neither times to highlight numerous reports of fatality-underreporting. Priyanka Pulla found for The Wire Science that Gujarat and Telangana could be underreporting deaths due to COVID-19 to a significant extent, later borne out by gross mismatches between the lengths of queues at crematoria and official state data. Maharashtra may have done poorly but the omission of politically inconvenient cases like Gujarat casts doubt on the integrity of the CEA’s analysis.

* The prospect of India facing a strong second wave is receding with the start of the vaccination this year.

This is a throwaway line of no scientific value.