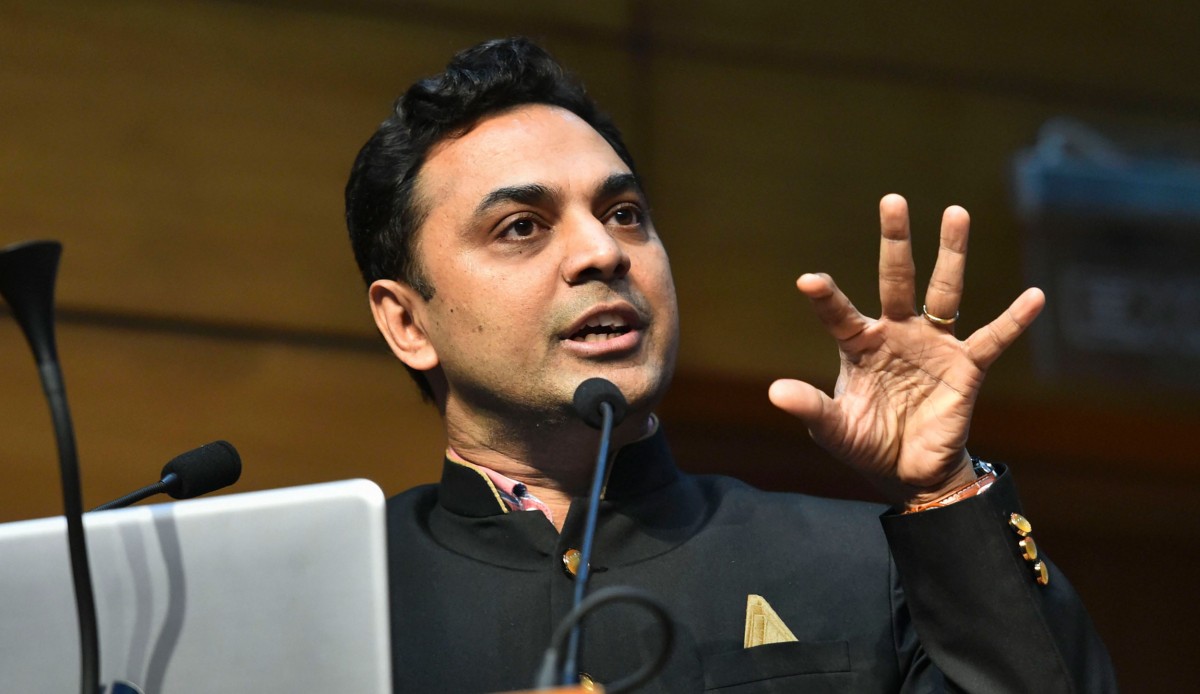 The Sensible, the Debatable and the Bizarre in CEA’s Defence of India’s Lockdown

The following are some salient points on healthcare in India drawn from the Economic Survey 2020-2021, released by Krishnamurthy V. Subramanian, the chief economic adviser, Ministry of Finance, earlier today. The points are presented verbatim, with slight edits for clarity. The document is available to read in full here. 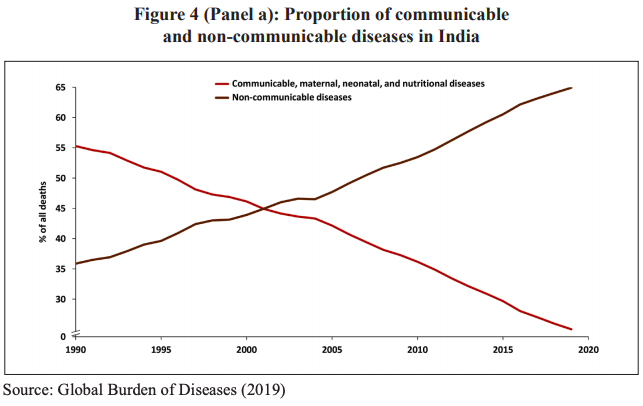 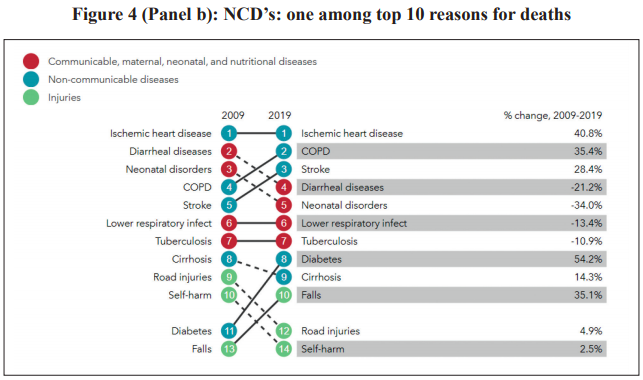 * We observe positive correlations between total number of cases and deaths with respect to health expenditure per capita implying better health infrastructure. So, better health infrastructure is no guarantee that a country would be able to deal better with devastating pandemics like COVID-19. As the next health crisis could possibly be drastically different from COVID-19, the focus must be on building the healthcare system generally rather than a specific focus on communicable diseases. 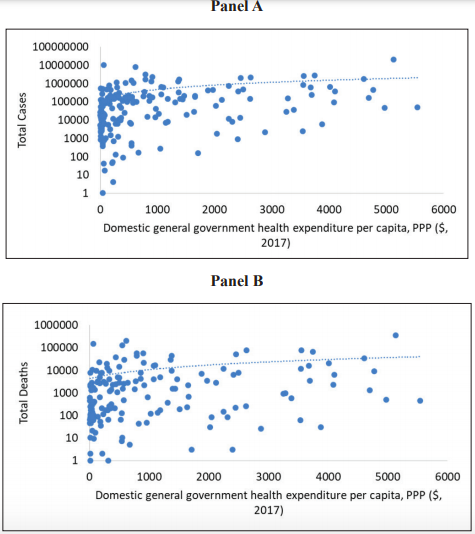 * Despite improvements in healthcare access and quality (healthcare access and quality scored at 41.2 in 2016, up from 24.7 in 1990), India continues to underperform in comparison to other Low and Lower Middle Income (LMIC) countries. On quality and access of healthcare, India was ranked 145th out of 180 countries (Global Burden of Disease Study 2016). Only few sub-Saharan countries, some pacific islands, Nepal and Pakistan were ranked below India.

* India has one of the highest levels of out-of-pocket expenditures (OOPE) in the world.

* According to National Health Accounts, 2017, 66 per cent of spending on healthcare is done by the states.

* India ranks 179th out of 189 countries in prioritisation accorded to health in its government budgets (consolidated union & state government). As Figure 10 shows, this prioritisation of health in India is similar to donor-dependent countries such as Haiti and Sudan, and well short of its peers in development.

* The states that have higher per capita spending have lower out-of-pocket expenditure, which also holds true at global level. Hence, there is need for higher public spending on healthcare to reduce OOP. … An increase in public spending to 2.5-3 per cent can substantially reduce OOP from the current level of 60 per cent to 30 per cent. 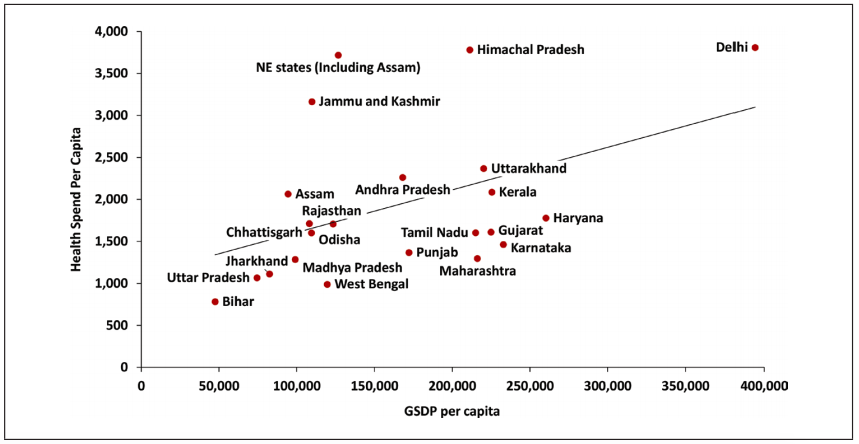 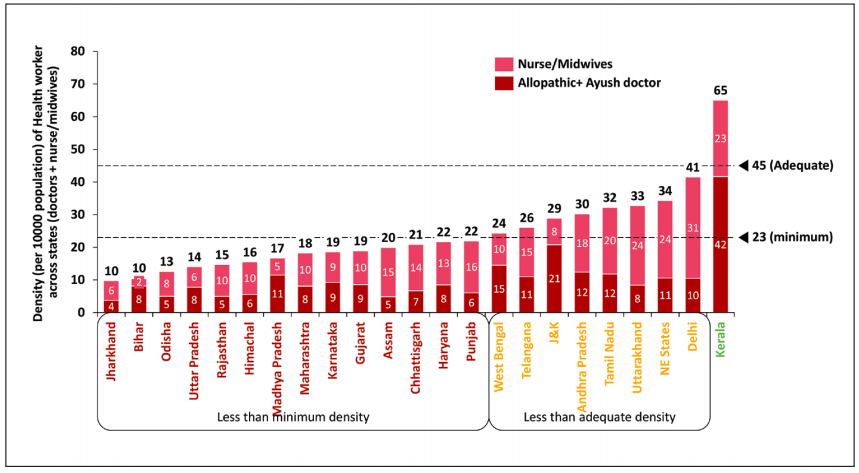 * Around 74% of outpatient care and 65 per cent of hospitalisation care is provided through the private sector in urban India.

* To understand the difference in quality between the public and private sector providers, we use data from PMJAY. Among the most common metrics of quality in the hospital setting is unplanned readmissions. Readmissions typically impose a heavy burden on patients and their families and on health systems in general as a result of unnecessary care. In general, readmissions are costlier than original admissions. Using the data till November 2019, it is observed that the average claim amount in a readmission case is Rs 19,295 compared to Rs 12,652 in the corresponding original case. The average length of stay is also higher in the readmission, 7.5 days versus 6.6 days.

* The data shows that the mortality rate for neonatal procedures is much higher in private hospitals than in public hospitals, 3.84% and 0.61% respectively. Public sector patients get readmitted to the same hospital 64% of the time versus 70% for private hospitals. About 3/4th of outpatient care and 2/3rd of hospitalisation care is provided through the private sector. So, a large proportion of deaths in India manifesting due to poor quality of healthcare is likely to reflect that the quality of treatment in the private sector may not be significantly better than that in the public sector in India.

* The costs of treatment are not only uniformly higher in the private sector, the differences are humongous for in-patient treatments of severe illnesses such as cancers (3.7x), cardio (6.8x), injuries (5.9x), gastro (6.2x), and respiratory (5.2x).

* Impressive growth has been seen in the adoption of telemedicine in India since the outbreak of the COVID-19 pandemic … coinciding with the imposition of lockdown in India and the issuance of the Telemedicine Practice Guidelines 2020 by the Ministry of Health and Family Welfare (MoHFW) on March 25, 2020. eSanjeevani OPD (a patient-to-doctor tele-consultation system) has recorded almost a million consultations since its launch in April 2020. Similar growth was also reported by Practo, which mentioned a 500% increase in online consultations (varying from 200-700% across different specialties) in just three months.

All charts from the Economic Survey 2021.