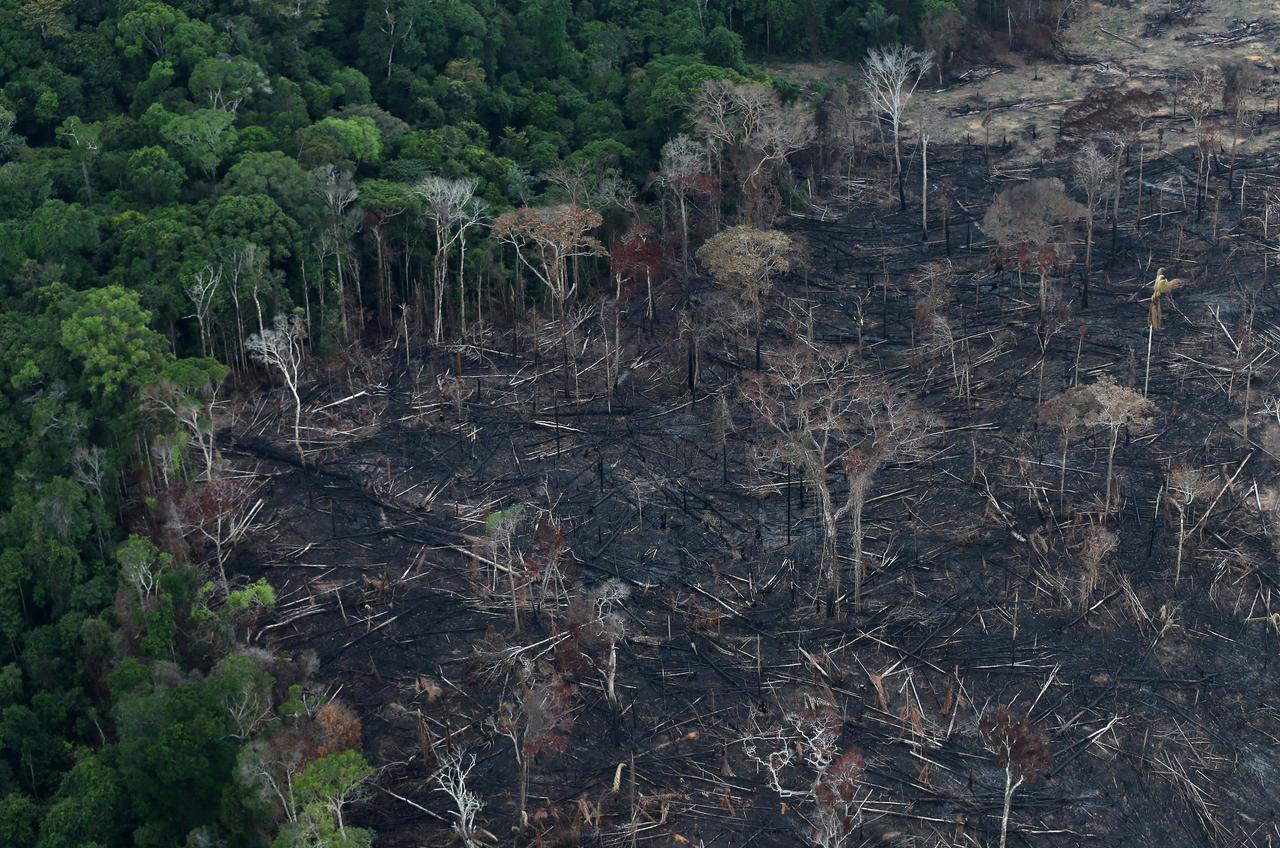 An aerial view of a tract of Amazon jungle after it was cleared by farmers in Itaituba, Para, Brazil September 26, 2019. Photo: Reuters/Ricardo Moraes

Climate change is already amplifying the spread of infectious diseases beyond their natural geographic range, warn scientists. The adverse effects of climate and environmental change are playing a hazardous role in worsening human health. Since the rate of animal-borne diseases has been increasing, changes to the climate are likely to affect the distribution of potential cross-over species, such as the recent coronavirus pandemic.

According to new research from Harvard University, coronavirus patients from areas which had high levels of air pollution, are more likely to die than patients from cleaner parts of the country.

Many countries are now taking comprehensive and stringent precautionary measures to contain the spread of COVID-19. But, how we can prevent such global pandemics and other health hazards in the future? Protecting nature is the solution, suggest climate experts.

Climate change is causing temperatures to rise at an alarming rate, allowing mosquitoes, ticks and fleas to move into new areas. Moreover, wet weather and the even snowballing high temperature, global heat wave, are collectively creating an ideal environment for numerous lethal organisms.

Take for instance, in warm conditions, mosquitos have the perfect breeding ground, but drought can also increase breeding when mosquitoes are attracted to water stored around households. A higher population of mosquito means there is growing potential for epidemics. For example, malaria kills a million people each year.

The World Bank estimates that by 2030, 3.6 billion people will be suffering from malaria – hundred million as a direct result of climate change. It is estimated that vector-borne diseases are responsible for more than 17% of all infectious diseases. According to a 2016 study by researchers at the Public Health Agency of Canada’s National Microbiology Laboratory, warmer winters are likely to increase the number of ticks that survive and prolong their active season, enabling them to reproduce and transmit diseases, thereby increasing the number of people at risk.

Similarly, air pollution is responsible for 8.8 million deaths each year, a recent study said. The vast majority of these deaths are often reported in low and middle-income countries, where access to quality health care is often a distant luxury for many people with poor economic conditions.

However, the effects of air pollution amongst children and pregnant women are more detrimental in comparison to others, reveals a study. “If we want to protect our children, we need to make sure the air they breathe is not toxic”, Sonja Ayeb-Karlsson, a global health specialist at the University of Sussex and a member worked on the study, told Al Jazeera.

Nick Watts, who co-led the Lancet Countdown on Health and Climate Change study warned that health damage in early childhood is “persistent and pervasive”, and carries “lifelong consequences”. “Children are vulnerable to the health risk of a changing climate”, said Watts, and “Their bodies and immune systems are still developing, leaving them more susceptible to diseases and environmental pollutants.”

According to a paper published in the Journal of Clinical Investigation, with climate change, we can expect an increase in cases of heat cramps, heat exhaustion, and possibly fatal heat strokes. Additionally, heat stress can also cause or worsen cardiovascular and kidney ailments. Many experts believe that global heating and environmental disturbances could elicit the development of more novel viruses such as the coronavirus.

“Extreme heat will impact children, older people who suffer from chronic conditions”, said Medicine Professor Rexford Ahima of Johns Hopkins University School of Medicine. The effects will have more severe effects on those who live in underserved communities, according to Professor Ahima.

“Some diseases, such as Zika, are spread by mosquitoes and ticks, and can be expected to spread as a warming world expands the animal’s geographic range,” warns Katharine Hayhoe, a climate scientist at Texas Tech and an author of climate change report, the National Climate Assessment. “Climate change can exacerbate the risks associated with viruses and diseases like influenza in general.”

Kirsty Short, a research fellow at UQ’s school of chemistry and molecular biosciences, “The environmental destruction associated with climate change can lead to an increased incidence of animal viruses, jumping the species barrier and crossing over into humans”, Short told ABC News.

It is seemingly clear that large scale anthropogenic, environmental changes are among the most important drivers of zoonotic diseases. Some of the key drivers include land-use change such as deforestation, agricultural encroachment, urban sprawl, etc. Several research studies have revealed that animal-borne diseases are going to become more frequent due to the rapid destruction of nature.

Due to climate change and habitat loss, an increasing number of wild animals are changing their behaviour and migrating to new areas. Presently, more than one million species are at risk of extinction, due to harmful human activities, thereby making it inevitable that protecting nature is critical to preventing a mass extinction. Take, for example, the massive deforestation in the Amazon, climate experts are predicting that the Amazon rainforest could turn into a ‘savanna‘ in 50 years.

The increasing rate of deforestation, which has soared across the globe is not only decreasing the biodiversity but also forcing wild animals to find new habitats for their survival, often driving them into close contact with humans. It creates perfect conditions for pathogens to move from animals to humans and thus increases the probability of epidemic outbreaks.

“Walls will not keep pathogens out”, said Ashish Jha, Director of the Harvard Global Health Institute. “No borders are going to protect us. That’s what awaits us unless we act now.” “Nature is sending us a message with coronavirus pandemic and the ongoing climate crisis,” declares Inger Anderson, executive director of UN’s environment programme.

“Failing to take care of the planet means not taking care of ourselves”, Anderson said, “It was always human behaviour that caused diseases to spill over into humans.” According to Anderson, to prevent outbreaks like that of the novel coronavirus, we have to end both global heating and destruction of the natural world for farming as well as mining and housing, as both drive wildlife into contact with people.

Besides, the rate of spillover events, that led to severe disease outbreaks, has been increasing. It is time to promote and practice pragmatic surveillance of wild animals as part of an integrated infectious disease prevention and control strategy. Take, for instance, a zoonotic virus called ‘reovirus’ which was successfully discovered at an early stage, thanks to prior knowledge accumulated through the wildlife surveillance system, say scientists.

A study by researchers at the University of Chicago projected that, by 2100, climate change would kill roughly as many people as the number who die of cancer and infectious diseases at the moment. Today, it is the poor who bear a disproportionately high share of the global mortality risks of climate change.

“Climate change is potentially the greatest health threat in the 21st century”, WHO expert Diarmid Campbell-Lendrum, told Reuters, “We need to cut our carbon emissions; as two-thirds of the exposure to outdoor air pollution is from burning of fossil fuels”, Lendrum adds.  It should be noted here that, by reducing the burning of fossil fuels, we could avoid 2.5 million premature deaths each year by 2050, estimates the WHO.

“This is a crucial year for global climate goals”, Somini Sengupta wrote in the New York Times. “The presidents and prime ministers are under pressure to get more ambitious about reining in greenhouse emissions when they gather for UN-led climate talks in Glasgow in November”. The conference will develop a roadmap that will guide nature conservation efforts for the next 10-years, within this period, it is targeted to slow global warming, preserve our ecosystem and conserve threatened species.

As research foretells, the rising global temperatures will alter the timing, distribution and severity of disease outbreaks, it is high time to accept climate change as a ‘global emergency’, take urgent action and uphold international collaboration. According to the UN, we have mere 10-years to prevent a 1.5 degree Celsius or 2.7 degrees Fahrenheit, above the pre-industrial level. If we fail to reduce global emissions and keep the temperature below 1.5 degree Celsius, we can witness catastrophes as early as 2040.

Nature is mighty and scary, we need to respect it and stabilise the earth’s climate system, or else, humans will not have the requisite immunity to cope with nature’s wrath and swathes of the planet may become inhabitable. COVID-19 is a wakeup call by nature and it is already affecting humanity. One thing is clear, that we cannot defeat nature, because there is no insulation from natural hazards.