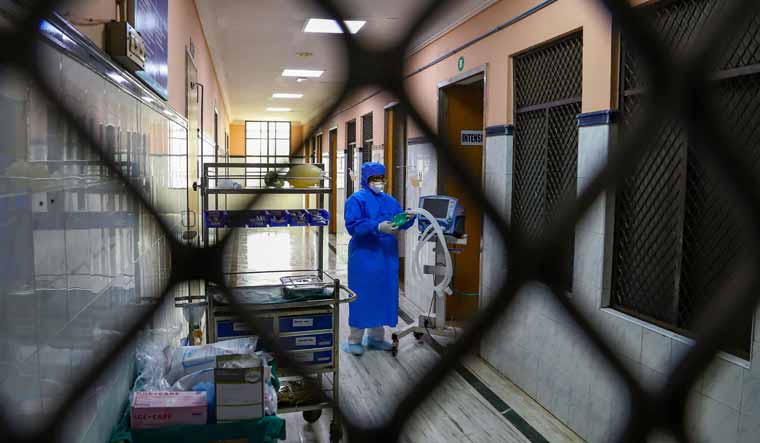 New Delhi: As India enters an extended lockdown to slow the spread of the novel coronavirus, experts are worried whether community spread of the virus has started, and if so to what extent; or whether the country still has a small window of opportunity to stop the spread.

There are indications that community transmission has begun, with reports of people who have had no contact with travellers from abroad acquiring the virus, Ritu Priya, a professor at the Centre for Social Medicine and Community Health at Jawaharlal Nehru University, New Delhi, said. “But the level to which it will go is yet uncertain. The scenario is not very hopeful.”

“It is difficult to predict how it will fan out,” Anant Bhan, a public health expert and adjunct professor at the Kasturba Medical College, Manipal, said in agreement.

Three crucial facts – that the virus is contagious, ordinary social contact is enough for transmission, and that there is no vaccine – mean such viruses will spread widely, T. Jacob John, one of India’s top virologists and a retired professor at the Christian Medical College, Vellore said. “It is only when a big number of infected people, ill or well, develop immunity that the spread will slow down.”

“For each virus introduction, the second generation of transmitted infections are traveller-related. The third and fourth generations are community transmission and, therefore, each location has a tipping point and that had begun to occur in a few spots a week ago,” John added.

The transmission dynamics of infectious diseases are centred on a number called the basic reproductive ratio: it represents the number of susceptible people that one infected person could infect, if we assume everyone lacks natural immunity and there is enough time for the virus to incubate. So in order for the microbe to survive, each infection must generate at least one more new infection, and during an outbreak, each infection generates more than one new infection.

In an editorial published by the journal Current Science in March, John had argued that the COVID-19 pandemic “is an avalanche, gathering momentum as it grows. Virus receptors are in upper respiratory tract and lungs – so infection spreads easily and is more virulent than flu.” Indeed, as Arun Panchapakesan explained in The Wire Science, the new coronavirus has evolved to establish stronger bonds with cells in the human respiratory tract than the SARS virus did.

A new preprint paper by Anand Sahasranaman, a mathematician at Krea University, Andhra Pradesh, and a visiting scientist at Imperial College, London, and independent researcher Nishant Kumar has said India still has “an apparently low current caseload, with possibly a small window of time to act, and should therefore aggressively and systematically expand random testing for community spread, including for asymptomatic cases.” This the authors have said will help understand the true transmission characteristics and plan appropriately for the immediate future.

Sahasranaman and Kumar began by characterising individual infections to create a network of COVID-19 infections in India, and then computed the transmission rate.

Also read: How Do Scientists Model the Spread of an Infectious Disease?

Between January 30 and February 3, 2020, India had its first three cases of COVID-19 in three students who returned to Kerala from Wuhan, where the new coronavirus originated a few months ago. No one else tested positive for a few days until March 3, since when the number of cases has been steadily rising around the country, especially in Kerala, Maharashtra and Uttar Pradesh.

The duo’s study consolidates data from the Indian Council of Medical Research (ICMR) – a total of 13,486 samples, standing for 10 tests people per million population – which they say is “very low compared to other countries that have been testing for community spread, and creates the risk of missing such transmission in case it is already underway in the country.”

According to the Union health ministry, there are 775 people in India who currently have COVID-19 and thus far, 17 other people have succumbed to it. These figures are quite far from the case loads being reported from China, Italy, Spain or even the US, which has become the new epicentre of the virus’s spread. However, experts believe if the present situation is calm, it is only the calm before the storm.

And “given this shrinking window of opportunity and the significant lacuna in testing, India must aggressively and systematically proceed to widen the scope of testing for possible community transmission immediately,” the authors wrote.

ICMR recently announced that even asymptomatic and/or high-risk contacts of a person confirmed to have the new coronavirus will have to get tested. However, “given the tremendous void in testing for community spread so far, there is a need for larger-scale random testing of both symptomatic and asymptomatic cases in order to better understand the extent of spread in the broader community,” Sahasranaman and Kumar said.

Sahasranaman also told The Wire Science that as of now, India had tested about 15 people per million – “among the lowest in the world.”

Based on ICMR’s daily updates of tests, the number works out to around 1,000 per day India even though ICMR scientists have admitted that the  country has the capacity to test 6,000-8,000 samples a day.

Health officials’ current testing strategy involves randomly sampling patients from a larger group of people who have reported severe influenza-like illnesses with no known causes. In their paper, Sahasranaman and Kumar argue that the officials’ randomisation strategy will have to account for factors such as favoured airports through which international travellers are arriving in the country, population density of cities, ages of individuals and the networked character of disease transmission, among others.

As John said, “the virus is spreading furiously” and the current containment strategy is “ambitious and unrealistic”.

However, India has evolved a more cohesive and coherent social-distancing strategy (notwithstanding the economic fallout), especially with the three-week national lockdown that Prime Minister Narendra Modi instituted from March 25. And the next 20 or so days will determine if it will be as effect as – among others – the prime minister says it will be. “There are a lot of ifs and buts. We need to identify cases as soon as possible. The question is: are we able to do that?” Bhan asked.

India’s principal challenge today is an advantage on most other days: its size. Its states and union territories are vary widely in their ability and preparedness to respond to the new coronavirus’s spread, according to Bhan. In China, most cases were clustered in Wuhan, if only at first, allowing government officials to focus their efforts on a small region. But in India, officials have reported multiple clusters of cases, both in the north and the south (the latter being better equipped). As a result, the government has to allocate more personnel as well.

Thus, almost everyone agrees that depending on only a lockdown or only on testing will not contain the virus. There needs to be both.

And since India has implemented an aggressive lockdown, the time for aggressive testing is ripe. Such “testing can yield data to formulate [better] strategies to stop the outbreak,” K Sujatha Rao, former health secretary in the ministry of health and family welfare, told The Wire Science.

Rao has repeatedly stressed that a lockdown – no matter how well executed – is only one of four pillars that India must erect to contain the new coronavirus virus; the other three are aggressive testing, contact tracing and information dissemination.

Considering ICMR already reportedly has the capacity to conduct more tests, Rao said the government needs to incentivise the private sector to manufacture more testing kits. In turn, John pointed out that even manufacturing and validating testing kits, and then scaling up testing, is easier done than having enough trained personnel at laboratories and technicians. As one way out, Sambit Dash, who teaches in the Melaka Manipal Medical College in Manipal, suggested retraining or re-skilling retired doctors, allied healthcare workers and medical students to staff hospitals and labs attending to COVID-19 patients.

Missing lessons from the past

This isn’t the first time India has had to deal with an epidemic in crisis, having already quelled outbreaks of swine flu (caused by a strain of the H1N1 virus) and severe acute respiratory syndrome in 2009 and 2002, respectively, but appears not to have learnt all its lessons well. Priya said the H1N1 virus has in fact become endemic to India, so the county should have taken all flu outbreaks seriously.

As John previously wrote, “India’s HIV control success story is a globally acclaimed one thanks to an early start, a proactive task force leadership, the right interventions and reliable data. Unfortunately, it still remains a ‘vertical’ one-disease programme, like those against tuberculosis, malaria, leprosy and polio.”

Finally, Sahasranaman said, India’s economy is founded largely on the unorganised sector, and social distancing, a transport and industry lockdown and logistical disruptions are bound to devastate it.

“It is our responsibility to know more about the reality of this outbreak so the measures to combat it are proportional to the magnitude of spread and we do as much as we can to protect those already vulnerable,” he said. “States will really need to significantly step up social protection measures for the time of this outbreak.”