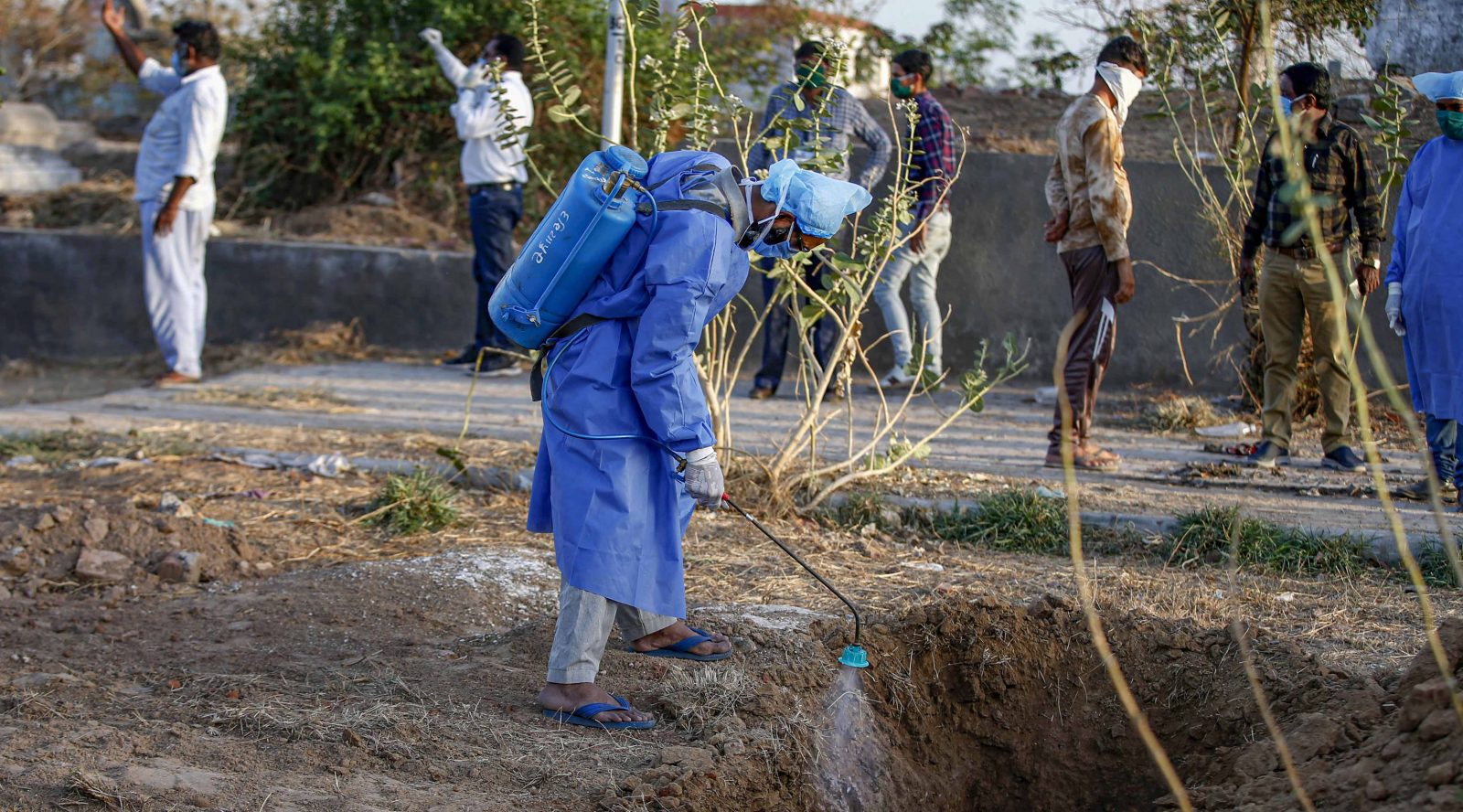 On the fifth day of the national lockdown in India to contain the spread of the coronavirus, the count in India has gone up to 996. The number of COVID-19 patients who have died in India rose to 27 on Sunday evening – an increase of eight since the last government update. The number of cases stands at 901. Of these, 95 have now recovered.

Globally, the confirmed number of cases continues to rise at an alarming rate as the total number of confirmed cases across the globe stood at 664,695 cases on Sunday morning.

US President Donald Trump issued a “strong travel advisory” for hard-hit New York and surrounding states. COVID-19 deaths in the US have risen past 2,000 with cases increasing to over 120,000.

British Prime Minister Boris Johnson, who is self-isolating after testing positive for COVID-19, has written a letter to every household in the UK, urging people to stay home and take precautions against the spread of coronavirus. “We know things will get worse before they get better,” reads the text. “But we are making the right preparations, and the more we all follow the rules, the fewer lives will be lost and the sooner life can return to normal.”

PM @BorisJohnson is writing to every UK household to urge them to stay at home, protect the NHS and save lives. #StayHomeSaveLives pic.twitter.com/GMNPqEl10d

Mexico’s deputy health minister Hugo Lopez-Gatell has also called on the country’s residents to stay home for a month, saying it’s the only way to stop the spread of coronavirus. Mexico’s government has gone from downplaying the threat to stepping up calls for social distancing after COVID-19 cases doubled in a week. Mexico currently has over 700 cases.

Over 150 FIRs were registered and 3,811 people were detained in the national capital on Sunday for violating prohibitory orders amid the coronavirus outbreak, the Delhi Police said.

According to data shared by the police, 153 FIRs were registered under Section 188 (for disobedience to order duly promulgated by public servant) of the Indian Penal Code till 5 pm.

As many as 3,811 people were detained under Section 65 (persons bound to comply with reasonable directions of police officers) and 381 vehicles were impounded under Section 66 of the Delhi Police Act, the data added.

2 arrested in Mizoram for spreading fake news on COVID-19

Two sexagenarian men have been arrested in Mizoram for spreading fake news on social media claiming that a person travelling with the lone COVID-19 patient from the state has tested positive for the disease, a senior police officer said on Sunday.

With the fresh arrests on Saturday, the total number of persons arrested in the state for spreading fake news on novel coronavirus has risen to 18, he said.

“The fake news was posted on a WhatsApp group by a 62 -year-old man from South Chawngtui village in Hnahthial district and was widely circulated,” Mizoram Inspector General of Police (Headquarters) John Neihlaia said.

The Centre on Sunday asked state governments and Union Territory administrations to effectively seal state and district borders to stop movement of migrant workers during the nationwide lockdown.

“Those who have violated the lockdown and traveled during the period of lockdown will be subject to minimum 14 days of quarantine in government quarantine facilities,” the Union Ministry of Information and Broadcasting said.

During a video conference with chief secretaries and DGPs, cabinet secretary Rajiv Gauba and Union home secretary Ajay Bhalla asked them to ensure that there is no movement of people across cities or on highways as the lockdown continues.

“There has been movement of migrant workers in some parts of the country. Directions were issued that district and state borders should be effectively sealed,” an official statement said.

States were directed to ensure that there is no movement of people across cities or on highways and there should be strict implementation of the lockdown. Only the movement of goods should be allowed.

According to a report in News18, nearly 11% of those patients who have been tested so far due to severe acute respiratory illness (SARI) have been found positive for the novel coronavirus.

These figures likely signal that community transmission of the virus has been taking place, as most of those tested by and large had no travel history. On Saturday, Indian Council of Medical Research (ICMR) scientist Dr. Raman R. Gangakhedkar admitted that there were sporadic cases where SARI patients had tested positive.

In his monthly radio programme ‘Mann ki Baat’, Prime Minister Narendra Modi on Sunday apologised for the “harsh decision” of a 21-day nationwide lockdown enforced in an attempt to contain the pandemic.

After facing backlash from state leaders, US President Donald Trump announced that he decided against imposing a sweeping lockdown on New York City and surrounding areas, instead opting for a “strong travel advisory.”

“A quarantine will not be necessary,” he wrote on Twitter. He added that more concrete guidelines will be issued shortly.

According to data compiled by the Johns Hopkins University, over 500 of the COVID-19 fatalities were in New York City, which has the most cases in the US at nearly 30,000. The US currently has 121,117 COIVD-19 cases according to Saturday’s numbers, adding more than 20,000 cases in 24 hours.

At the recommendation of the Coronavirus Task Force & after consulting with @NYGovCuomo, @GovMurphy, & @GovNedLamont, @CDCgov issued a Domestic Travel Advisory urging residents of NY, NJ, & CT to refrain from non-essential travel for the next 14 days. https://t.co/PtEI5IXWe4

Man dies after after walking 200 km during lockdown

A 39-year-old man, who had walked almost 200 km from Delhi to reach his home in Morena in Madhya Pradesh, collapsed and died in Agra on Saturday.

The man, identified as Ranveer Singh, worked as home delivery boy for a private restaurant in the national capital. According to the police, the victim collapsed near the Kailash turning of the NH-2, after which a local hardware store owner Sanjay Gupta rushed to the victim.

Sikandra station house officer (SHO) Arvind Kumar, said, ”Gupta made the victim lie on a carpet and offered him tea and biscuits. The victim complained about chest pain and also called his brother-in-law Arvind Singh over phone to share his health condition. At around 6.30 pm, the victim passed away and local police was informed.”

With three more persons testing positive for coronavirus in Maharashtra, the number of such patients in the state has gone up to 196, state Health Minister Rajesh Tope said on Sunday.

“Three more people have tested positive, taking the tally to 196. However, 34 people have been discharged so far in the state. So the number of active COVID-19 patients in the state is 155,” Tope said.

Five more persons, including two women, tested positive for the coronavirus in Uttar Pradesh’s Gautam Buddh Nagar on Sunday, taking the total number of cases in the district to 31, officials said.

Those who tested positive for coronavirus on Sunday were a 31-year-old man from Dadri’s Bishnoli village, a 19-year-old girl from Noida Sector 27 and two men aged 34 and 35 years and a 35-year-old woman from a housing society in Noida Sector 137, the administration said in a statement.

All the five latest cases had directly or indirectly come in contact with a London-based man, who had come for audit work in a private firm in Noida’s Sector 135, according to officials. An FIR was lodged against the firm on Saturday for hiding information about the British citizen’s arrival and stay here from March 14-16 on the basis of a complaint from the district’s Chief Medical Officer (CMO), Anurag Bhargava.

Second coronavirus death in Valley, 33 cases in J&K so far

Jammu and Kashmir on Sunday reported its second death due to the coronavirus after a man from northern Kashmir, who had tested positive for the infection and was admitted in a Srinagar hospital, died on Sunday morning.

The deceased, who was in his sixties, had come in contact with a couple who had returned from Saudi Arabia and are presently “asymptomatic”.

No need to panic over LPG supplies

Indian Oil Corporate Chairperson Sanjiv Singh told PTI that there is no need for the public to panic on LPG supplies. He said the company is servicing 100% of refill orders.

There is more than adequate petrol, diesel and LPG available to last beyond the lockdown period, he said.

(With inputs from PTI, Reuters)