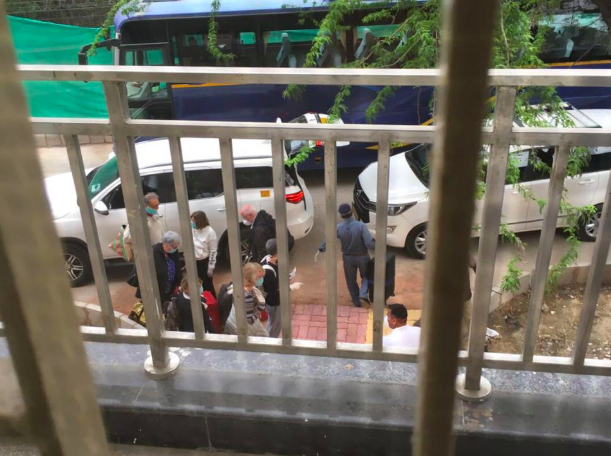 A group of Italians being transferred from the ITBP camp to a waiting vehicle, to be taken to a hospital for further treatment. Photo: Special arrangement.

The 15 Italians at the quarantine camp run by the Indo-Tibetan Border Police in Delhi who tested positive for the SARS-CoV-2 coronavirus have been moved to a hospital in the city for further treatment, according to other residents of the camp. The Wire was able to obtain photos of their departure, along with government officials, through special arrangement.

Prasad Ravindranath, science editor of The Hindu, wrote on his blog that with 28 people in India confirmed to have a SARS-CoV-2 infection, the virus has begun local transmission within the country. Specifically, the 22 new people reported to have COVID-19, the disease caused by the virus, were infected locally. This means the virus has begun spreading within the country instead of each new person reporting an infection having recently travelled abroad. The largest number of coronavirus infection cases – 17 – have been reported from Jaipur: 16 Italian tourists and one Indian. The person who tested positive in Delhi had recently returned from Italy and the person in Hyderabad had returned from the UAE; both countries have reported local transmissions of the virus.

The Indian Association of Tour Operators (IATO) has requested the Government of India to screen all passengers flying into the country irrespective of the countries they’re coming from. IATO is the apex body for tourism in the country. Thus far, only passengers travelling from select countries — China, Hong Kong, Japan, South Korea, Nepal, Singapore, Thailand, Vietnam, Indonesia, Malaysia, Iran, and Italy — are being screened on arrival in India.

The Telangana government on Wednesday morning said it has detected two more suspected cases of coronavirus. On Monday, the state confirmed the first positive case. According to The News Minute, many tech companies in Hyderabad’s IT sector got the word ‘unofficially’ that the preliminary tests indicate that the two persons could have contracted the virus. The website also reported that government sources said the two people showed ‘borderline symptoms’ and the state wanted to reconfirm the samples.

One person with the suspected case works at the Raheja Mindspace, a tech and industrial park in Hyderabad. Soon, scores of employees working inside building number 20 were asked to evacuate and self-quarantine themselves.

According to reports, companies located in two other buildings of the park also asked their employees to evacuate.

Union health minister Harsh Vardhan has said that a total of 28 people in India have tested positive for the new coronavirus, according to Economic Times. According to the WHO’s March 3 situation report, India had until yesterday reported only five cases. The sudden jump is likely to due to the discovery of existing cases and not due to virus transmission within the country, plus thanks to the 14 Italians at the Indo-Tibetan Border Police camp near Delhi who have tested positive. This said the number of cases have been expected to rise as more detection systems are put in place and more people are screened for the virus.

Health minister @drharshvardhan has said that a total of 28 cases of #coronavirus have been confirmed in India.#CoronaAlerthttps://t.co/7rBEIxKBNj

Prime Minister Narendra Modi tweeted on March 4 that on the back of international experts’ advice to avoid mass gatherings to prevent the spread of the SARS-CoV-2 virus, he has decided not to participate in any Holi programmes this year. The festival of Holi falls on March 10.

Experts across the world have advised to reduce mass gatherings to avoid the spread of COVID-19 Novel Coronavirus. Hence, this year I have decided not to participate in any Holi Milan programme.

As many as 15 citizens of Italy and one Indian have tested positive for COVID-19, the disease caused by the new SARS-CoV-2 coronavirus, at the Indo-Tibetan Border Policy facility near Delhi.

All India visas granted to citizens of Italy, Iran, Japan, and South Korea before March 4, 2020, have been suspended, according to Times of India reported. The Indian Bureau of Immigration has also said that anyone who needs to visit India for whatever reason should apply for fresh visas that will be subject to the stricter controls put in place to limit the spread of SARS-CoV-2 within India.

Please note the updated advisories on #COVID19.
These are in supersession of all earlier advisories.@PMOIndia @drharshvardhan @AshwiniKChoubey @PIB_India pic.twitter.com/lHPf1kvfci

Japanese researchers have reported in a preprint paper that the new coronavirus, dubbed SARS-CoV-2, has an 18.7-times higher odds of transmission in a closed environment than in an open one – a finding with important repercussions for the way governments deal with crowds in closed spaces like museums, hospitals, and schools during the epidemic.

The condition of the person in Telangana who tested positive for SARS-CoV-2 has improved since Monday, the state’s health minister Etela Rajender has said. The person travelled from Bengaluru to Hyderabad before testing positive and was subsequently admitted to Hyderabad’s Gandhi General Hospital. Rajender told Deccan Chronicle that the 88 people the person had come in contact with have been advised to visit the hospital to test for COVID-19, the disease SARS-CoV-2 causes. The state government has set up 3,000 beds in government and teaching hospitals to receive patients.

Bruce Aylward, a veteran epidemiologist, and leader of the WHO mission to China to assess the SARS-CoV-2 outbreak told Vox, “In recent weeks, … the number of new infections and deaths reported in China has been declining, which suggests the spread of the virus may have peaked there and that transmission is slowing down. At the same time, cases are rapidly increasing in several other countries, with major outbreaks in South Korea, Italy, and Iran — and a growing case count in the United States.”

The UK’s Independent has reported that the Olympic games in Tokyo this year could be postponed from the original July 24 start date if the outbreak hasn’t been contained by then. Japan’s contract with the International Olympic Committee only requires that the games happen this year, and not in a specific month.

This is a developing story and is being updated.