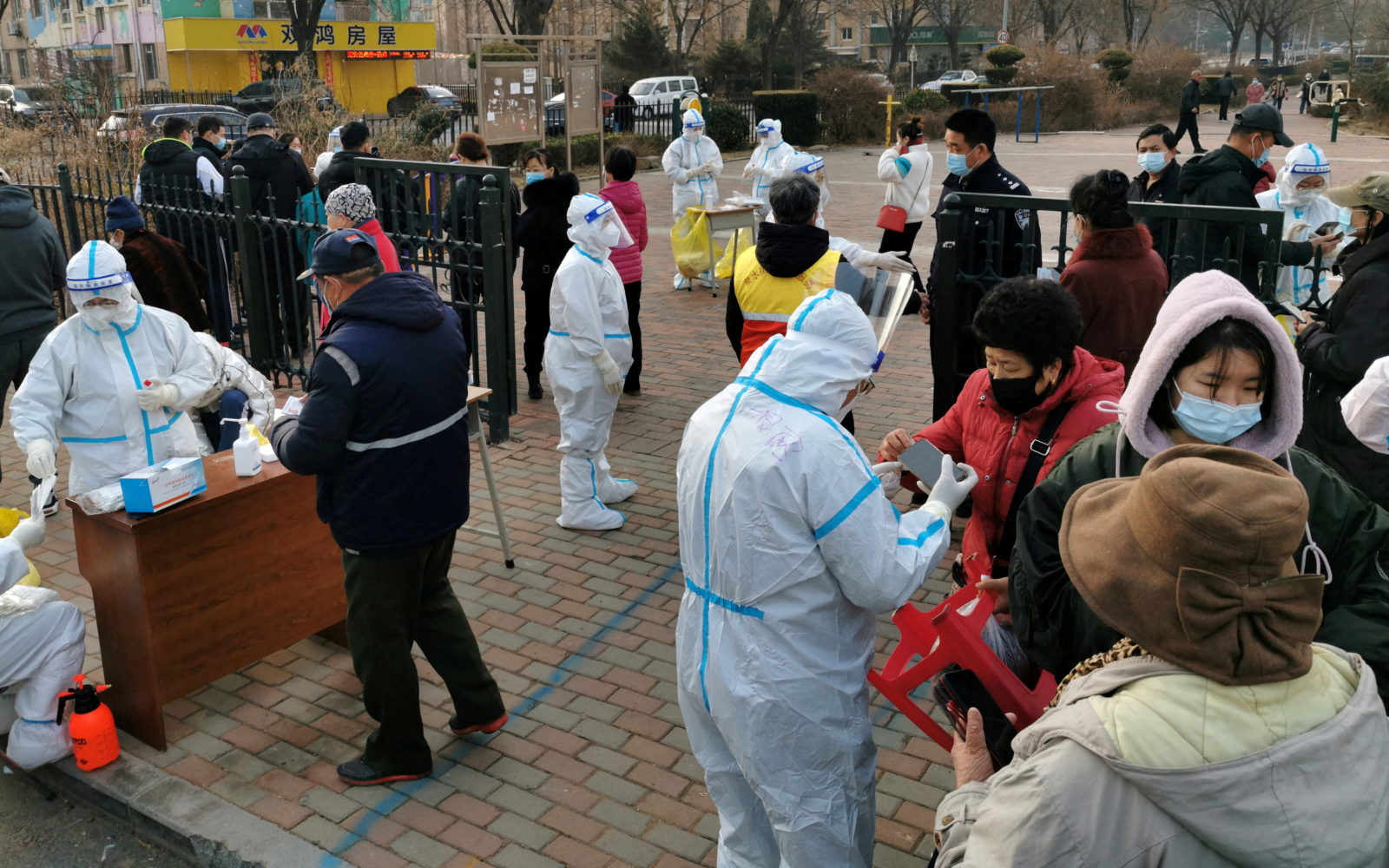 People line up at a nucleic acid testing site for COVID-19 at a residential compound in Dalian, China, March 16, 2022. Photo: China Daily/Reuters

The Western Pacific region and Europe are back in the news with an uptick in the number of SARS-CoV-2 cases.

In fact, the world has reported an increase in the number of weekly COVID-19 cases for the first time since the end of January 2022. The WHO’s weekly epidemiological update on March 15 has also reported an overall increase of 8% in the world’s case tally.

This rising trend has revived fears of a new COVID-19 ‘wave’. Is it one?

Curiously, the concept of a ‘wave’ doesn’t formally exist in epidemiology. One way to read this is that any increase in the number of cases doesn’t immediately mean a wave. Instead, the rise must have a certain pattern – a pattern that governments and healthcare workers find useful, to prepare.

One such pattern could be that the number of cases needs to rise consistently for two or three consecutive weeks. Each of the three waves around the world of novel coronavirus outbreaks fits this criterion.

For the same reason, it’s difficult right now to say whether we’re at the start of a fourth wave.

The second part of the answer to the question has to do with variants of the virus.

The first wave was driven by the spread of the ‘original’ variant. The next two were motivated by two variants of concern – the delta and the omicron, respectively. Each of them was the most transmissible of its time, one was more able to cause severe COVID-19 while the other was a better evader of vaccine-induced immunity.

There hasn’t been a new ‘variant of concern’ since the omicron variant, so what could be causing the number of cases to rise?

The answer depends on the region.

The Western Pacific has been reporting the fastest increase in cases: by up to 29% in March 7-13. In this region, China has been the most significant cause for concern. It announced a complete lockdown of 13 cities on March 15, including the largest such Chinese city to date, Shenzhen, home to 12.6 million people. The decision will affect 30 million people in all.

According to Our World in Data, by March 15, China recorded a 330% rise in the number of new cases every week. Experts have attributed this alarming climb to the country’s ambitious ‘zero-COVID’ policy – essentially, to suppress the virus’s spread to the extent possible.

As a result, epidemiologist and public-health specialist Chandrakant Lahariya explained, when this population was exposed to even ‘low levels’ of the virus, lots of people got infected because the extent of natural immunity in the population remained low.

The omicron variant is the most transmissible variant of the novel coronavirus thus far. This is why experts at the WHO and others have been sceptical of China’s plans. The variant itself put China’s ‘zero-COVID’ policy to the test, and won.

Another factor that could contribute to the rise in cases is vaccination coverage. China deployed two inactivated-virus vaccines, Sinopharm and Sinovac. And according to Lahariya, though vaccination coverage in China has been satisfactory, these two vaccines haven’t been able to protect very well against the virus.

“The inactivated vaccines … have relatively lower levels of efficacy. We know this by now,” he said.

As a result, in China, both natural immunity and vaccine-induced immunity have stayed low, allowing the current surge in COVID-19 cases.

This might also be affecting China’s neighbouring countries. The number of new cases every week has increased of late in Laos, Vietnam and South Korea by 80%, 50% and 40% respectively, according to Our World in Data (see chart below).

In Europe, the number of cases increased by 2% between March 7 and 13. But unlike China, most European countries have populations with high natural immunity, as well as good vaccination coverage with efficacious shots.

However, the number of weekly cases in Finland and the UK, for example, have shot up by 100% and 60%, respectively.

The driving force here appears to be the spread of the omicron variant’s BA.2 sub-lineage.

We don’t know if the BA.2 strain causes more severe disease than BA.1 (which we know as the ‘original’ omicron variant). We know that BA.2 is more transmissible but the WHO has said that the difference is small.

According to a variant-tracking platform called CoVariants, many countries are reporting an increasing fraction of positive genome samples containing the BA.2 sub-lineage.

Another factor localised to the European region is that many nations here had ‘opened up’ and eased restrictions on public life sooner than other countries in the world. If a more transmissible variant got loose in this milieu, the number of cases were bound to shoot up.

The UK has announced that it will do away with testing requirements, even for those who aren’t fully vaccinated yet, and restrictions on gathering in public places from Friday.

“This shows that the UK, and broadly Europe, has made peace with the fact that small surges will come and go,” Shahid Jameel, a virologist and a visiting professor at Ashoka University, Sonepat, told The Wire Science. “They are prepared for it.”

At the same time, Lahariya said it might be premature to press the panic button on these countries. This is because their better vaccination coverage as well as greater level of natural protection, relative to China at least, could still help to prevent severe disease and death (due to COVID-19).

According to Jameel, since a significant fraction of the population of the UK has received booster doses as well, it can better afford to open up their economy. “This makes sense. They just have to see that the hospitalisation number doesn’t go up.”

“The currently prevailing situation in Europe points only to two things – an insight as to how we still need to keep studying the changing behaviour of the virus, and why genome sequencing is still so important,” Lahariya said. (Only genome-sequencing can spot new variants and sub-lineages.)

On March 16, Union health minister Mansukh Mandaviya reportedly took stock of the number of cases rising worldwide and instructed his fellow officials to keep an eye out for similar reports from India.

Lahariya believes there is currently no reason to worry, since the number of cases is declining from one week to the next. “We have extremely high levels of seroprevalence” – which means more natural immunity – and “more than 95% first dose coverage.” Jameel agreed.

So while there could be a wave in the Western Pacific and European regions, they are likely to have different epidemiological characteristics. And while India may not have to confront a wave of its own, it could do better than to let its guard down.