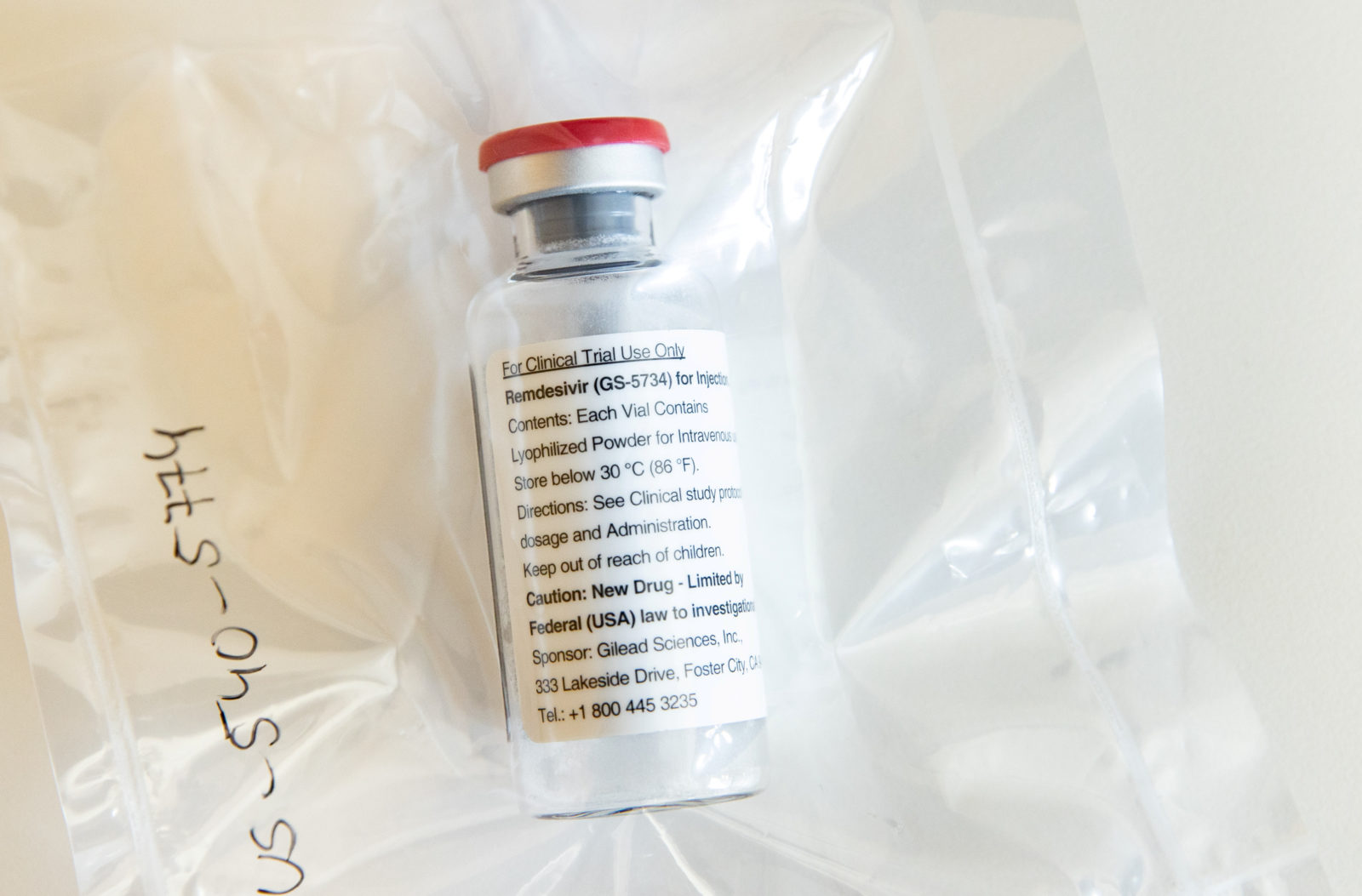 An ampoule of remdesivir pictured at a news conference at the University Hospital Eppendorf, Germany, April 8, 2020. Photo: Ulrich Perrey/Pool via Reuters/File Photo

Bengaluru: The Bharatiya Janata Party’s resident in Gujarat, C.R. Paatil, has courted controversy by distributing the antiviral drug remdesivir for free in Surat, where 5,792 cases of COVID-19 are currently active.

The Union health ministry approved remdesivir for restricted use in June 2020 to help manage severe COVID-19. As such it can be sold only with a prescription, in the form of an injection, and only hospitals and pharmacies are allowed to stock it.

Indian Express reported on April 12 that Paatil had arranged for the drug to distributed at no cost at two Zydus hospitals in Surat as well as from the BJP party office in Navsari.

The state government has held back from questioning Paatil. Asked about where and how Paatil could have got the pricy drug from, Gujarat Chief Minister Vijay Rupani only said Paatil has made the arrangement of his own initiative, and that the state’s stocks designated for Surat have not been diverted.

Paatil told Express that he had “made arrangements to buy 5,000 remdesivir injections from Zydus” and that “we will get supply of 500 to 1,000 injections daily from the company for Surat city”. He added that patients from districts in South Gujarat and Surat could visit the BJP office with the treatment file, doctor’s number “and other necessary details”. Party functionaries would then “verify” the documents and provide the injections.

The newspaper also reported that C.J. Chavda, the Congress MLA from Gandhinagar, has since written to the state’s food and drugs commissioner demanding a batch of 2,500 injections of remdesivir for distribution in his constituency. “I wrote the letter because if BJP president C R Paatil can collect remdesivir injections for distribution in Surat, why can’t I do the same for my constituency?” he reportedly asked.

According to the MedlinePlus service of the US National Library of Medicine, remdesivir recipients should tell their doctors if they are allergic to remdesivir, have or have ever had liver or kidney disease and if they are or plan to become pregnant. The page also lists some potential side-effects, including nausea, skin bruises, yellow eyes or skin and stomach discomfort – the last two being considered severe.

Remdesivir is an antiviral drug made by Gilead Sciences, Inc., an American company. Zydus introduced its version of remdesivir in August 2020, called Remdac, at Rs 2,800 per injection. In late March 2021, it cut the price to Rs 899 per dose. In June last year, Cipla said it would sell its generic version of remdesivir at less than Rs 5,000 per dose. Because of its monumental case load, Maharashtra announced last week that it would force the cost of remdesivir to be capped at Rs 1,400 per dose.

The antiviral drug’s efficacy against severe COVID-19 is not proven, but desperation has has kept its demand high. On April 9, for example, Mumbai police arrested two people for selling remdesivir at Rs 8,000 per vial.

Express quoted an unnamed “top government official” saying “individual entities are generally not authorised to access this drug” as well as that “political parties cannot procure remdesivir because they do not have a wholesale licence to buy and stock drugs”.

To be effective, remdesivir has to be infused directly into the bloodstream, and multiple times during one course. As a result, it can only be given in hospitals, in controlled conditions and with the patient’s informed consent. However, only people with severe COVID-19 are hospitalised – and by this time, the disease is likely to have progressed too much for remdesivir to work.

A large trial conducted by the WHO last year found that remdesivir doesn’t “improve survival and other outcomes”. Another, smaller trial found some benefit with using remdesivir among patients with moderate COVID-19. However, Dr Narayana Subramaniam, an on. cologist in Bengaluru, found multiple flaws in the study’s design. He concluded, “In people with moderate COVID-19, where the mortality was 1%, it is impossible to justify remdesivir’s use without evidence of concrete clinical benefit.”

Remdesivir has a unique mechanism of action. Enzymes are types of proteins used to speed up chemical reactions in the body. The novel coronavirus’s replication involves many such reactions. One important enzyme used in this process is made up of smaller subunits. Remdesivir enters one of these subunits and changes its shape. As a result, the enzyme can’t participate in the process and the virus becomes unable to replicate.

Aside from remdesivir, India has also approved favipiravir, itolizumab and tocilizumab for restricted, controlled and consensual use among COVID-19 patients.

C.R. Paatil was made the BJP’s Gujarat unit chief in July 2020. Darshan Desai had reported for The Wire at the time that Prime Minister Narendra Modi hadn’t made him a Union minister despite his big victory in the 2019 Lok Sabha polls to have him bolster the party’s flagging prospects in the state.

“Modi wants to create a stronger fiefdom in the south Gujarat region where the Congress has no regional satraps or caste leaders, unlike in Saurashtra and North Gujarat, where Hardik Patel, as the new working president of the state Congress, promises to be a force to reckon with,” Desai wrote.