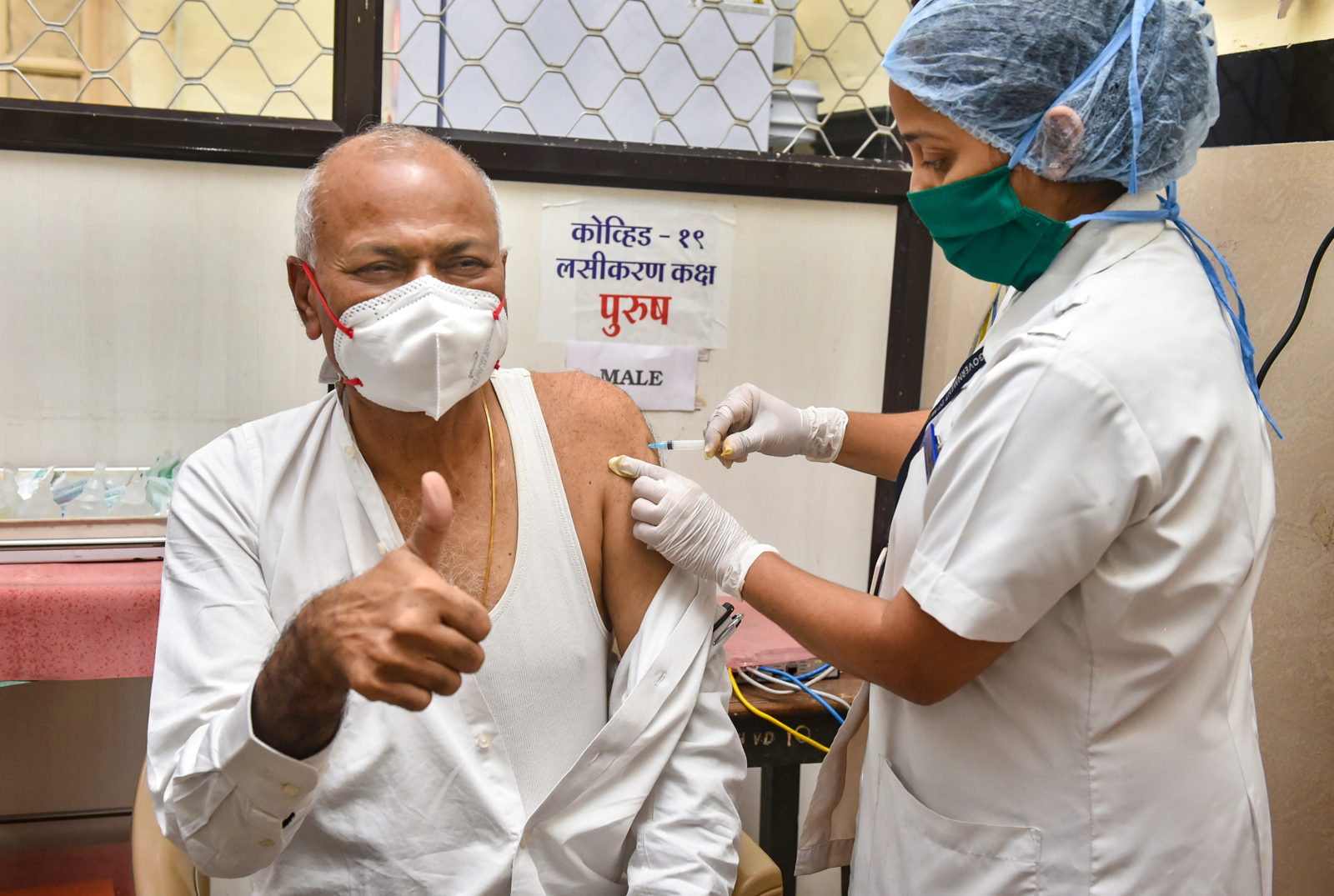 Virus Variants May Not Be Behind COVID-19 Upsurge in Maharashtra, Kerala

T.P. Lahane, director of medical education, being administered a dose of COVID-19 vaccine at a facility of J.J. Hospital in Mumbai, February 18, 2021. Photo: PTI/Mitesh Bhuvad

The Centre on Wednesday announced that people over 60 years and those above 45 with comorbidities can get COVID-19 vaccines from March 1 – even as it cautioned states and union territories that any laxity in implementing stringent curbs, especially in view of new virus strains observed in certain countries, could “compound the situation”.

As new coronavirus cases crossed the 13,000 mark for the third time in six days on February 24, the Centre rushed multi-disciplinary teams to nine states and the union territory of Jammu and Kashmir, most of which have reported a surge in the number of cases, to support them.

A decision on the next phase of COVID-19 vaccination was taken at a meeting of the Union Cabinet under the chairmanship of Prime Minister Narendra Modi. The vaccine is to be be offered free at government facilities and for a charge at many private hospitals, the meeting resolved.

“The second phase of the world’s largest vaccination drive will start from Monday in which anybody above 60 years, that may not be less than 10 crore people in the country, and 45 years plus with co-morbidities will be given vaccines in 10,000 government medical facilities and also over 20,000 private hospitals,” information and broadcasting minister Prakash Javadekar told a media briefing.

Javadekar said those who want to get vaccinated at private hospitals will have to pay, and that the amount will be decided by the health ministry in three-four days after discussions with manufacturers and hospitals.

Asked if people will have a choice of vaccine, Covishield or Covaxin, Javadekar said India is proud to have two vaccines that are both effective with proven efficacy.

(Editor’s note: This is not true, however. Effectiveness is measured as the vaccine’s efficacy after being administered to a very large population (typically 10,000 people or more) and efficacy data can be obtained from phase 3 clinical trials. However, at the time of the vaccine candidates’ approval by the national drug regulator, this data was not available for either candidate and still isn’t, considering the trials are yet to conclude.)

While Oxford-AstraZeneca’s Covishield is manufactured by the Serum Institute in Pune, Covaxin is produced by Bharat Biotech, Hyderabad.

Asked whether ministers and the prime minister, who would be now be in the category of those who can take the vaccination, will get inoculated, Javadekar said those who want to take the jabs can take it at the place of their choosing from March 1.

The Union health ministry said the cumulative number of COVID-19 vaccine doses administered to healthcare and frontline workers has crossed 1.23 crore in the country. The countrywide COVID-19 vaccination drive was rolled out on January 16.

On the three member multidisciplinary teams despatched to states, it said they are headed by joint secretary-level officers in the health ministry.

“These teams will work closely with the states and UTs administration and ascertain reasons for the recent surge in the number of COVID-19 cases,” it said in a statement.

The ministry added that the teams will also coordinate with health authorities of the states and Jammu and Kashmir for the requisite COVID-19 control measures.

Medical experts and scientists also cautioned that the spike in cases in some states is likely due to break in protocols. “I would say the surge is most likely due to non-adherence to COVID appropriate behaviour,” said noted virologist Shahid Jameel.

Rakesh Mishra, director of Hyderabad’s CSIR-Centre for Cellular and Molecular Biology, agreed that the current surge in certain states is less likely due to some new variant and more due to people ignoring protocols.

The Centre has also written to Maharashtra, Kerala, Chhattisgarh, Madhya Pradesh, Gujarat, Punjab and Jammu and Kashmir, which have reported a rising number of daily cases, along with decreasing proportion of the RT-PCR tests and rise in positivity in some districts.

In the letter, Union health secretary Rajesh Bhushan exhorted them to focus on undertaking aggressive measures to break the chain of transmission and ensure RT-PCR testing is amplified to flush out hitherto undetected cases from the population.

These states and UTs have been advised to increase testing in a focused manner in the affected districts with the appropriate split of RT-PCR and rapid antigen tests, and to also ensure all symptomatic negatives of antigen tests are compulsorily tested with RT-PCR tests, the health ministry statement said.

The positive persons must be promptly isolated/hospitalised, all their close contacts be traced and also tested without delay, it added.

As cases surged in some states, West Bengal mandated passengers travelling in flights from Maharashtra, Kerala, Karnataka and Telangana to produce a negative COVID-19 report on arrival.

People travelling in flights, trains and buses from these states will have to produce negative test report before entering Delhi, they said.

At the same time, 19 states and UTs have not reported any deaths due to COVID-19 in 24 hours.