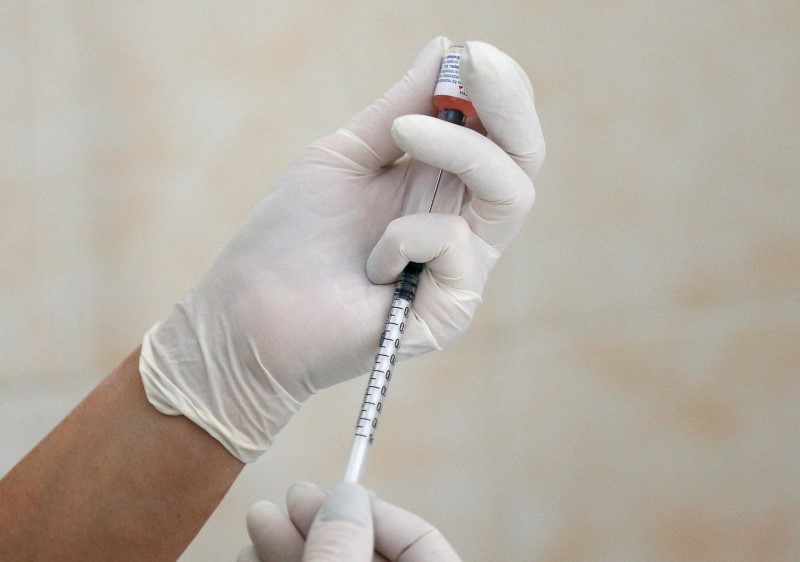 Representative image: A nurse fills a syringe with a vaccine before administering it at a children’s clinic in Kiev, Ukraine, August 2019. Photo: Reuters/Valentyn Ogirenko.

Enrico Bucci is a professor of systems biology at Temple University, Philadelphia. He describes himself as – among other things – a fraud-buster. On September 7, he published a ‘note of concern’ on his blog, co-signed by 36 other scientists and academics and copied to the editor of The Lancet, the well-regarded medical science journal, raising serious concerns about data presented in a paper it had published.

That data pertained to the results of phase 1/2 clinical trials of a Russian candidate vaccine against COVID-19, dubbed Sputnik V by the Russians. The vaccine, the paper concluded, was safe and produced a strong humoral and cellular antibody response in all the 76 people who had received it.

Bucci and his peers were concerned about potential data inconsistencies in three of the figures in the paper. Antibody levels in groups of subjects were suspiciously identical across time periods – they shouldn’t have been. Only reanalysing the raw data could resolve their doubts.

This episode has important implications for India’s efforts to secure adequate supplies of a COVID-19 vaccine. Specifically, Dr Reddy’s Laboratories has agreed to buy 100 million doses of the Sputnik V vaccine once it has regulatory approval. Doubts surrounding this vaccine must be laid to rest without compromising our ability to trust its safety and efficacy, and we must also ensure no such questions arise in the vaccine’s phase 3 clinical trials, which are still pending.

Vaccine development wasn’t always this complicated. The British physician Edward Jenner developed the world’s first vaccine – against smallpox – in the late 18th century. Since then, vaccination has occupied an increasingly essential space in health policy in every country. Smallpox and polio are two of vaccines’ many great successes – whereas its failures include HIV, herpes simplex and tuberculosis.

And today, this storied history is joined by another layer, or dimension, of issues: the uneasy friction between science, vaccine nationalism and public health.

Since the start of the pandemic, global leaders – with the WHO’s help – have recognised the vital and strategic role of a safe and effective vaccine. However, political compulsions driven by populist self-interest and chauvinism have not helped. Leaders in America, India and Russia have seemed the most eager to short-circuit the science and fashion a vaccine to feed electoral rhetoric.

At the same time, researchers have found evidence of existing immunisation programmes being disrupted by the pandemic, and of a lack of planning for the rapid and equitable deployment of a vaccine as soon as one becomes available. Vaccine nationalism – which encompasses the tendency of some governments to reserve and/or hoard vaccines to protect its citizens first instead of, say, more vulnerable people elsewhere – is also getting in the way of a realistic plan to develop the infrastructure for rapid deployment.

The most proximate step in this impending chain of events is to have at least one safe and efficacious vaccine. While politicians figure out what will happen next – and resolve, exacerbate or create inequalities – we would be better served if we left what is happening now to the scientists and regulators. That is, scientists ought to be able to develop a vaccine that whoever gets access to can trust, and independent regulators must ensure this happens without fear or favour.

The European Medicines Agency has published an updated set of guidelines on the clinical evaluation of vaccines. They include detailed advice, recommendations and guidance on all aspects of the clinical trials that are required to establish a vaccine’s safety and efficacy.

In a sense, the principles that guide vaccine trials are not very different from those guiding drug trials. However, the criteria need to be more stringent and the standards even higher. It’s not just a cliché to say a vaccine’s safety is mission-critical. This is simply because a therapeutic drug is given to someone with a known illness, and the patient may be willing to trade the risk of certain side-effects for the likelihood of the drug’s clinical benefits.

A vaccine, on the other hand, is given to healthy people with the advance promise that, should they be exposed to the infectious agent, they will be protected from infection and disease. So any side-effects must be at worst mild, self-limiting, short-lived and have no lasting effects.

The other big difference is that therapeutic drugs are administered in clinical settings to a limited number of patients with specific illnesses. Both adverse events and therapeutic benefits, if any, are thus concentrated in this relatively small subset of the population.

A vaccine is intended for distribution among and use by a very large number of people – perhaps even the entire population. In any case, a vaccine works best if a specific fraction of the population has been vaccinated as well. (For a given individual, the ideal tradeoff is if she can avoid getting vaccinated because everyone else in the community has been vaccinated.) It could be administered in community settings, often by a range of healthcare workers with basic training, often accompanied by a legal mandate.

To avoid a situation wherein everyone chooses to be last, vaccine safety is paramount. The people must be able to trust the regulatory system and the health service administration; without such trust, vaccination programmes will simply die. The setbacks to the polio campaign and the MMR scare in the West are awful examples of what can go wrong when public trust, for whatever reason, is lost.

It is against this background that we must note the swift action that regulatory bodies took after an undisclosed adverse event temporarily halted the clinical trial of the Oxford vaccine, being conducted around the world. While the trial was suspended, investigators reviewed the data to check if the adverse event was related to the vaccine or not. This level of scientific scrutiny should reassure us. At the same time, there is no way for us to know if all the vaccine candidates that have graduated to phase 3 trials thus far were subjected to similar standards.

Russian president Vladimir Putin announced that his country had developed a “successful” vaccine on the basis of the phase 1/2 clinical trials – the same trials that Bucci and his peers had doubts about. His announcement was met with justifiable scepticism and critical comments. Ashish Jha, the dean of Brown University’s School of Public Health, was quoted by The Lancet itself saying he has “no idea whether [Sputnik V] is safe or whether it works.”

In a written reply on September 15 to a question in the Rajya Sabha, the Minister of State for Health Ashwini Kumar Choubey listed seven companies in India to manufacture and test a COVID-19 vaccine. He also said, “Discussions within government on the Russian vaccine are ongoing as of now. No formal studies have been initiated.”

Two days later, India’s Dr Reddy’s Labs signed a contract to buy 100 million doses of Sputnik V. This may turn out to be an unwise commitment given the controversy surrounding Putin’s hasty announcement even before large-scale phase 3 clinical trials have begun, leave alone concluded. Although news reports did not mention government involvement in the Dr Reddy’s deal, the minister’s reply suggests the Centre was involved in some way.

Also read: How True Is Modi’s Claim That His Decisions Saved India From the Worst of COVID-19?

India’s track record in clinical trials is quite poor – both with respect to maintaining the integrity of the big pharmaceutical companies that design and carry out clinical trials and the rigour and accountability with which the country’s drugs regulator operates.

Successfully developing and deploying a safe and efficacious vaccine against COVID-19 is vital for public health as well as for the economic welfare of a billion-plus Indians. The focus must be unwaveringly on getting the science right, on building trust by conducting clinical trials with the utmost integrity, and ultimately to earn the people’s confidence with open and  transparent reporting of the results. Where science has the answers, we need to allow scientists to unlock them first.