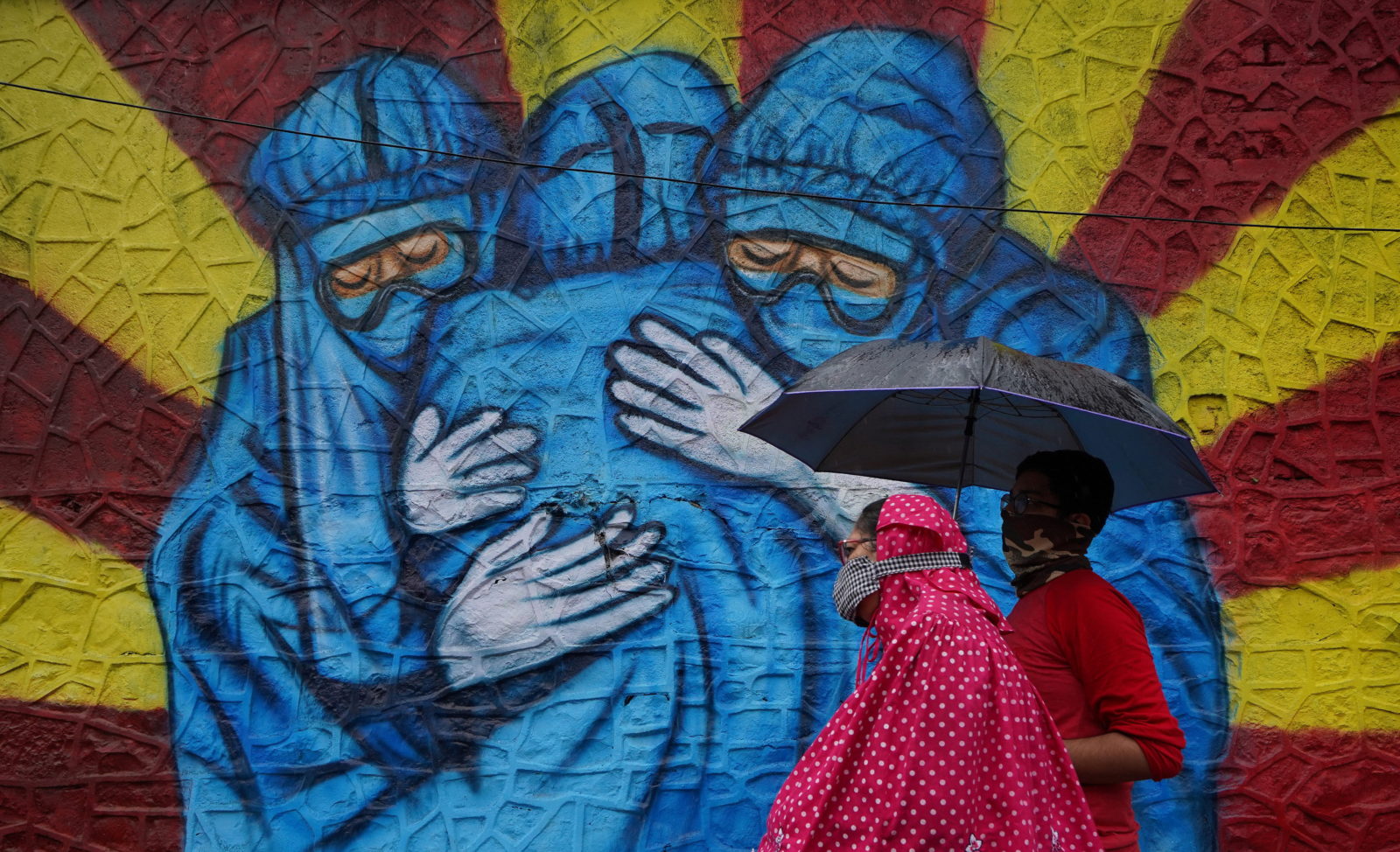 A woman and her son walk past a graffiti on a street in Mumbai, December 1, 2021. Photo: Reuters/Hemanshi Kamani/File Photo

New Delhi: How many people have actually died due to COVID-19 in India?

The discourse on this topic got a fresh fillip this month – first when a scientific paper said India’s actual death toll due to the disease was 6-7x higher than what the government has officially recorded, and second when an ongoing Supreme Court case (last heard on January 19) revealed that the number of applications cleared for compensation to the kin of the dead was much higher than the official toll in some states.

Meanwhile, on January 14, the Union health ministry issued a press release saying all was well with its data.

The study described in the scientific paper, published on January 6, 2022, was led by demographer and epidemiologist Prabhat Jha. It found that India’s estimated COVID-19 death toll from June 2020 to July 2021 was 3.2 million – with 2.7 million probably occurring during the second wave alone. Note that India’s official death toll to date is around 0.48 million.

India hasn’t had a good track-record of medical certification of the cause of death. According to the Registrar General of India’s figures, of an estimated 7 million deaths in 2017, over 6 million were registered – and only 1.41 million were medically certified for the cause.

Talking to The Wire earlier, Jha said that his paper attempted to clear the air over a suspicious “paradox” – as to why India’s death toll wasn’t very high even though its case-load was. Many believed, especially during the first wave, that there could be something unique to India that suppressed the death toll. “In retrospect, with this analysis, we realise the belief was a mistake,” Jha said.

In the Supreme Court, it has come to light that many state governments have awarded more compensation claims by the kin of those who died with COVID-19 than the number of such victims in their official data.

In Gujarat, for example, against the official toll of 10,094, the state received as many as 89,633 claims for compensation. And of the latter, the state has already cleared over 68,000, according to Times of India. Chhattisgarh, Tamil Nadu, Telangana, Uttar Pradesh and Maharashtra are in the same boat.

Discrepancies between medical certificates and compensation claims on the one hand and the official toll on the other arise from different mechanisms – yet they point to a common conclusion: something is deeply amiss in India’s COVID-19 death numbers. This isn’t the first time doubts have been raised – and it probably won’t be the last.

The January 14 press release from the health ministry called media reports on the Jha & co. paper “mischievous”, “ill-informed” and “baseless and misleading”. It also pointed to an issue with the study’s denominator – which was based on the UN Population Division’s (UNPD’s) estimate for the number of people who usually died in India in the pre-pandemic period. Specifically, the Indian government had a problem with the study’s choice of UNPD data.

According to the study paper itself:

“The second government data source was all-cause deaths in the CRS for ten states with ten or more months of observations (including the interspersed periods between the two viral waves). In these states, the combined median increase, as a percentage of expected deaths based on UNPD death rates, was 26%.”

“It is a fact that different sources point to different crude death rates, or CDR [deaths per 1,000 people], for India, ranging from 6.2 to 7.5,” Murad Banaji, a mathematician and disease modeller, told The Wire Science. That is, if India’s projected population is 1.36 billion, the CDR yields an annual death toll of 8.4-10.2 million per year.

The UN estimate of the CDR is 7.2, implying an annual toll of 9.8 million. And what difference does this make in the overall estimation of excess death numbers? “Not much,” Banaji said. “In fact, if the Indian government’s estimates are used instead of UN estimates, to set expected baseline mortality, and we then compare expected deaths with survey data, this would lead to higher estimates of excess mortality.”

“Such a difference would still be just around 10-15%,” Banaji explained. “Plus, does it take away the fact that a surge in deaths happened? No.”

The ministry statement also picked on the study’s methods, especially the telephonic survey. Here, the researchers (through an agency that helped them) called 0.14 million adults and asked them if they knew about COVID-19 deaths in their intimate circles. At the end, they extrapolated the results nationwide.

There may actually be an issue here. P. Arokiasamy, an expert in demography and public health and who retired from the International Institute of Population Science, Mumbai, after serving there for three decades, said he didn’t find this part of the methodology to be convincing.

“This is used in voting surveys,” he told The Wire Science. “It isn’t a standard one for public health. Phone survey is a quick survey method to get a sense [of something] from some proportion of people. But a subject like this … requires more data and scientific surveys.”

The question that the researchers asked on the call (through the agency) also may have been deceptively simple: if a COVID death had occurred in the family. The ministry said in its statement that relying on this question was wrong because it could lead to “erroneous responses”.

“There are risks in asking family if a death was a COVID death or not,” according to Banaji.

“People might have died with COVID symptoms, but untested, and family members would not have been sure whether these were COVID deaths or not,” Banaji said.“During the first wave, awareness of the disease and testing were probably low outside a few urban areas. Even during the second wave, there were reports of families describing probable COVID deaths as ‘mystery deaths’.”

Jha himself only said that the ministry’s “statement doesn’t deserve a comment as it is full of distortions.”

To date, quite a few papers, including that by Jha & co., have attempted to estimate the excess deaths due to COVID-19 in India. Most of them have used CRS data, which has one particular lacuna: many states, but especially those whose healthcare needs have been traditionally unsupported, like Bihar and Uttar Pradesh, have poor death-registration systems.

The Indian government, through its health ministry, alleged that the work of Jha et al. was biased towards urban areas. One study used the Consumer Household Survey, which is also more urban. Others have used the Health Management Information System, which is heavily rural. So one way or another, the data was always going to be biased.

However, experts told The Wire Science whatever data is available is worth presenting – and that researchers can check their work by comparing their results with those from countries of similar socio-economic indicators.

Perhaps more importantly, even though different studies used data from different sources, they have reached similar estimates of COVID-19 deaths in India – 2-3 million. (Reminder: The current official toll is 0.14 million.)

Researchers from the Institute of Health Metrics and Evaluation (IHME) arrived at the lowest estimate on May 6, 2021: 0.6 million versus the 0.2 million officially recorded until then, even as India’s second COVID-19 outbreak was underway. The IHME is expected to release a new estimate of excess deaths in a couple weeks.

The highest estimate came from US-based health and development economists Anup Malani and Sabareesh Ramachandran. They said in an August 2021 working paper that 6.3 million people had died with COVID-19 during the first and second waves in India.

Notwithstanding the biases and/or limitations in these studies, all experts to whom The Wire Science spoke said the government wasn’t right to claim it hadn’t undercounted COVID-19 deaths. All of them also said the country needs a detailed nationwide study to ascertain the true COVID-19 toll.

Most countries in the world have undercounted their COVID-19 deaths. International bodies like the WHO and the IHME have acknowledged this, and are conducting studies of their own to understand the true extent of undercounting. In its May 2021 assessment, the IHME said India had undercounted deaths by a factor of 3 – among the highest at the time.

“A nationwide survey, down to the level of states and districts, because all have different needs” – along the lines of the National Family Health Survey or a household survey using verbal autopsies1 – Arokiasamy said about what India needs right now. This will be a resource-intensive exercise.

There’s a risk however: if the government agrees to conduct such a survey and if the survey reveals excess deaths, it will open the Pandora’s box of compensation claims as well as invite serious questions about India’s health system.

This said, Arokiasamy argued that the exercise will be worth it to understand what has already happened as well as to prepare for disease outbreaks in future. But is the government listening?