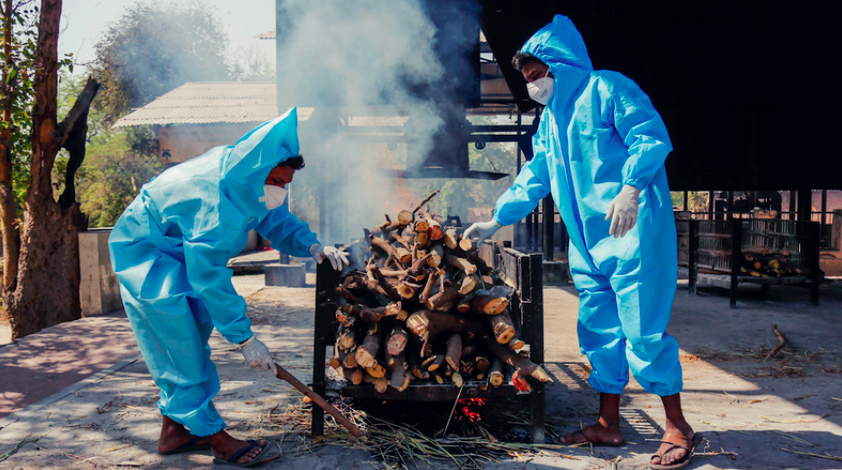 Representative image of a cremation in progress at Ahmedabad, amidst a surge in COVID-19 cases. Photo: PTI

Bengaluru: In a strange turn of events, the Gujarat state government informed the Supreme Court on January 16 that it has approved 68,370 claims for ex gratia for COVID-19 victims – while the state’s official cumulative death toll was only 10,094 until then.

According to Times of India, the state wrote in its compliance report for the apex court that it had received 89,633 applications in all. The state offers a sum of Rs 50,000 to the family of every individual who succumbed to the disease.

On January 19, a Twitter account called @BollyNumbers wrote that Gujarat wasn’t alone. Based on similar data, it reported that Tamil Nadu, Telangana and Uttar Pradesh had also differences disbursed amounts for more claims than what their official COVID-19 tolls indicated.

The account also wrote that four other states had received more claims (as opposed to the number of approved claims) than the official number of COVID-19 deaths, until January 16, 2022: Maharashtra, Andhra Pradesh, Chhattisgarh and Delhi.

The newspaper quoted unnamed officials in the Gujarat health department saying the state followed the Indian Council of Medical Research (ICMR) guidelines: that the deaths of patients with existing comorbidities and/or age-related complications wouldn’t be classified as ‘COVID-19 deaths’ even if they had the disease at the time of death.

As The Wire Science has reported, it is very difficult to attribute a death to a comorbidity if a patient also has COVID-19. One reason is that COVID-19 itself could complicate the outcomes of existing conditions – like most infectious disease can. Yet this criterion alone has left many COVID-19 deaths out of the country’s official tally.

This said, the ICMR guidelines also stipulate that for a family to claim the ex gratia emolument, it only has to produce a ‘positive’ PCR test of the victim taken within 30 days of their death. This could be a reason for the discrepancy: that nearly nine-times more people have died with COVID-19 in Gujarat than the number of people who have died in a way that fits the ICMR’s definition of a ‘COVID-19 death’.

Recently, epidemiologist Prabhat Jha told The Wire that the WHO doesn’t trust India’s COVID-19 death data because India undercounts more than other countries. Jha led a study published on January 6, 2022, that estimated India’s true death toll due to COVID-19 could be six-times higher than the official tally.

There have been concerns about widespread fatality underreporting in India since 2020 itself. In August that year, an investigative report by The Wire Science revealed the true scale and mechanics of the problem. As the report wrote:

There is evidence that at least two cities in Gujarat, Vadodara and Surat, and all districts of Telangana are flouting the ICMR guidelines. All of them are naming comorbidities as the underlying cause in a large number of confirmed deaths, and aren’t counting such deaths in their official tallies.

According to Times of India, Ahmedabad and Surat currently account for more than half of all official deaths in Gujarat.

In the last two years, some states, including Maharashtra, Tamil Nadu and Delhi, have also performed ‘reconciliation exercises’ – in which they have updated their deaths data weeks or months after a particular date, causing the tally to remain low in that period before suddenly jumping up.

In June 2020, mathematician and disease-modeller Murad Banaji found that even after its reconciliation exercise, Maharashtra may have been continuing to underreport the number of COVID-19 deaths, based on simulations of the “typical delay between when cases are recorded and when deaths are recorded, both on average”.

A year later, in June 2021, an NGO in Tamil Nadu said its analysis of the number of death certificates had found that the state could be underreporting COVID-19 deaths by a factor of six.

Gujarat’s habit of underreporting COVID-19 deaths also became evident when, last year, many publications found that Gandhinagar had reported no COVID-19 deaths in April – yet there were bodies of people who had died of COVID-19 being transported to crematoria. They subsequently reported that the death count was being suppressed in cities throughout the state.

An editor of the leading Gujarati daily Sandesh, Rajesh Pathak, told BBC at the time that the Gujarat government neither confirmed nor denied their reports of fatality underreporting. The government’s approval of more than 68,000 claims for ex gratia today may be this confirmation.

Note: This article was updated at 2:13 pm to include discrepancy in the COVID-19 deaths data for Tamil Nadu, Telangana and Uttar Pradesh as well.