While the technical body on immunisation has given its approval to the cervical cancer vaccine, the government is considering other parameters before introduction.

New Delhi: The highest advisory body in the government on immunisation has recommended that the HPV vaccine – which is given for cervical cancer – be introduced in India’s universal immunisation programme. The minutes of the December meeting of the National Technical Advisory Group on Immunization (NTAGI) state that the price of the vaccine will be a criterion for its selection, and that its inclusion depends on the outcome of a pending Supreme Court judgement on the matter.

But a month later, in January 2018, the health ministry told parliament that the same body was still “considering the matter.” 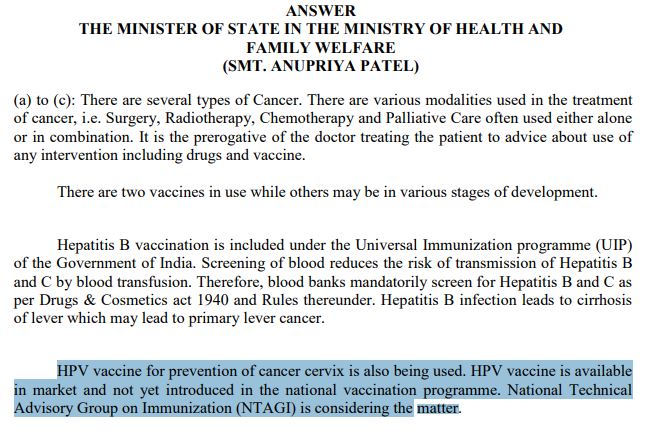 On this confusion, Manoj Jhalani, additional secretary in the health ministry, says: “The National Technical Advisory Group on Immunization is a recommendary body. Their decision is not final. It is up to the health ministry to consider this. For example, NTAGI doesn’t examine issues like the amount of resources available with the government, so we will be looking at that and also the legal issues. We will consider NTAGI’s recommendations but they are not the final authority.”

What did the NTAGI say about the HPV vaccine?

The December meeting of the NTAGI involved 41 people – bureaucrats and scientists. It also had representatives from international organisations like the WHO and UNICEF. Their minutes were released this week.

On the safety of the vaccine, the NTAGI’s minutes note: “The safety of these vaccines has been reviewed by multiple medical authorities and regulatory agencies globally including World Health Organisation, Global Advisory Committee on Vaccine Safety (GACVS), Food and Drug Administration (FDA), European Medicines Agency (EMA) and International Federation of Gynaecology & Obstetrics (FIGO). Available HPV vaccines have an excellent safety profile and nearly 270 million doses have been given globally.”

On the cost-effectiveness of vaccination, the NTAGI has also done an assessment using WHO tools and India-specific data. Although both boys and girls can be given the vaccine and the WHO says this drives down the disease faster, the NTAGI recommends giving the vaccine only to girls – and prior to them becoming sexually active. For older women, they also recommend screening, calling this “two different and independent strategies to prevent cervical cancer, aimed at different age groups. It is to be noted that the transmission can be reduced by only vaccination and not screening.”

Difference of opinion on the HPV vaccine

The HPV vaccine has off late been dogged by confusion regarding India’s recent position on it.

Much of the muddle came from the RSS-affiliated Swadeshi Jagran Manch writing a letter to the prime minister last year with a request “to stop this move to introduce HPV vaccine in India and we recommend the strongest action against groups that pervert science, which brings ignominy to the scientific community in the country and sells the country to vested interests.”

Additionally, last year, WHO’s deputy director general Soumya Swaminathan told The Wire, “the central government is actually considering incorporating HPV into its immunisation programme. So this shows that if you start discussing with evidence on a technical issue, and not on an emotional or political angle, you can achieve things.” Swaminathan gave the interview in her last few days as head of the Indian Council for Medical Research, before heading to the WHO.

In 2013, a Rajya Sabha standing committee submitted a report detailing alleged irregularities in the clinical trials undertaken in Andhra Pradesh and Gujarat by an organisation called PATH with the vaccines developed by Merck Sharp and Dohme and GlaxoSmithKline. The project was funded by the Bill and Melinda Gates Foundation.

At present, the vaccine for cervical cancer is available in the private sector but has not been part of India’s free, public, immunisation programme. The controversy around this vaccine stems largely from seven deaths, as a fall- out of a clinical trial in Andhra Pradesh and Gujarat, where adolescent girls were given the vaccine developed by Merck Sharp and Dohme and GlaxoSmithKline. The case is still being contested in the Supreme Court.