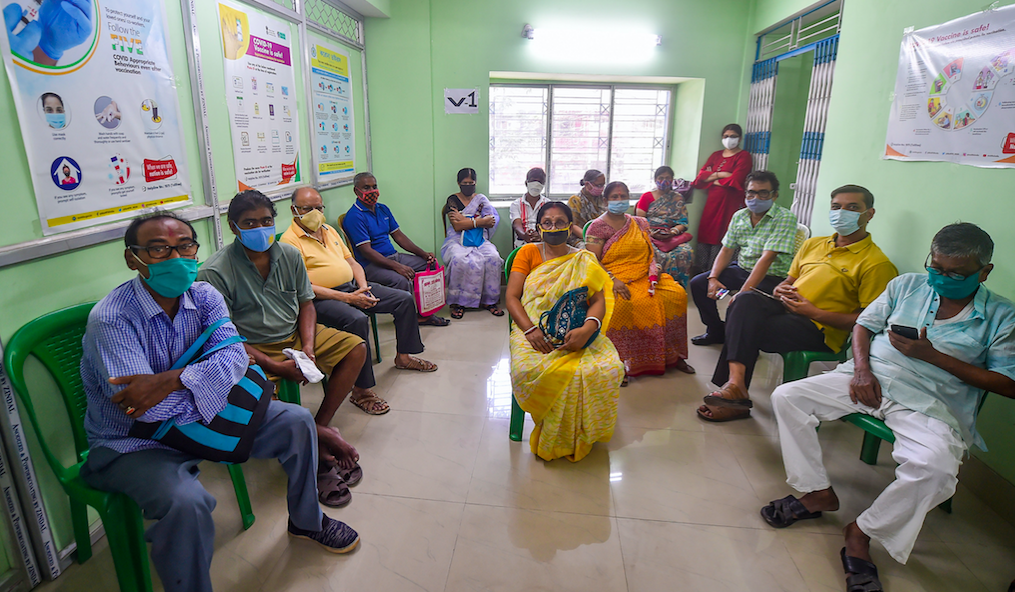 People wait to be vaccinated at a clinic in Kolkata. Photo: PTI

New Delhi: The Centre on April 19 loosened the eligibility criteria for COVID-19 vaccination and allowed private manufacturers like Serum Institute of India or Bharat Biotech to have greater flexibility in fixing prices for their vaccine output.

From May 1 onwards, state governments and private hospitals will be able to procure vaccines directly from manufacturers at the price that the latter choose to set.

The Centre has, so far, not placed a cap on what this price can be. In addition to the amount set by manufacturers, other factors like GST and transportation costs may be added to the final price tag of a particular shot.

In the meantime, the central government will continue its free vaccination drive for those above 45 years, healthcare workers and frontline workers.

All of this has led to more questions surrounding the vaccination drive. Here, The Wire will attempt to address what we know and do not know about accessing vaccines from May 1.

According to the Centre, anyone above the age of 18 will be eligible to receive a COVID-19 shot from May 1 onwards.

In its press release dated April 19, the Centre has also said that it will continue to allocate vaccines to states and Union Territories from its 50% share as well, depending on need, number of cases and speed of vaccine administration. So, we can surmise that in case a state government is unable to procure as many vaccines as it needs to, the Centre will step in.

I want to get the vaccine now. How much should I pay?

For people above 45 years, Covishield (by Serum Institute of India) and Covaxin (by Bharat Biotech)  can be obtained free of cost at government vaccination centres.

At private hospitals, people who were 45 and above could get either vaccine for Rs 250. This is because the Centre had capped the price of vaccines at Rs 250 and thus no hospital could charge people more than that.

Will this cap remain?

It seems unlikely, with the introduction of the new price liberalisation measures, that the Rs 250 cap will still apply to people above the age of 45 in private hospitals.

The Rs 250 amount included Rs 150 for the dose and Rs 100 for administration of the vaccine (a service charge or a hospital user fee).

It seems likely that the price that people who choose to get the vaccine in private hospitals after May 1 will consist of the following components: the price at which the vaccine was procured by the private hospital (which will now be higher than Rs 150) + the administration charge + any other charges the hospital chooses to levy.

This will likely make it difficult for a price cap to be maintained, but will require final clarification from the Centre.

So, from May 1, it looks unlikely that the price of a particular vaccine will be universal for everyone…

Exactly. How much you will have to pay for a shot will depend on how old you are, which part of India you live in and which hospital (central, state government or private) you go to.

It will also depend on which vaccine manufacturer’s candidate you choose. We will attempt to break these factors down in subsequent questions.

I have heard that Serum Institute has announced prices for Covishield. So do we know exactly how much we have to pay?

The Serum Institute of India (SII) has indeed announced prices for its Covishield vaccine. SII has said the vaccine would be sold at a price of Rs 600 per dose to private hospitals and Rs 400 per dose to state governments.

The above applies just for people between 18 and 45 who wish to get the Covishield vaccine.

I am above 45 and want to get a Covishield shot at a government hospital.

In government hospitals or designated COVID-19 vaccination centres, the shot is free if you are above 45.

I am between 18-45 years of age and want to get a Covishield shot a state government hospital.

Some states have announced that anybody above the age of 18 will receive a free vaccination. However, if you do not live in those states (a full list is provided in a later question below), you will be able to get the vaccine if you pay an amount which is likely to be Rs 400 + any additional cost including tax.

There is also speculation that your location might play a part. Considering that Maharashtra is the hub of vaccine production, transportation might cost less and subsequently, you may have to pay less if you are getting the shot in Maharashtra.

I am below 45 (but above 18) and want to get a Covishield shot at a private hospital.

From May 1, you will be able to get the vaccine if you pay an amount which is likely to be Rs 600 + any additional cost that the hospital chooses to levy along with tax.

Yes, some states have announced that all people above the age of 18 will be vaccinated for free. These include Madhya Pradesh, Uttar Pradesh, Assam, Chhattisgarh, Himachal Pradesh, Sikkim, Kerala, Goa, Tamil Nadu and West Bengal.

Although the ruling BJP-JD(U) combine in Bihar had announced before the assembly polls that vaccination would be free for all in the state if the parties return to power, the state government has made no announcement clarifying this stand yet.

According to the Union health ministry’s press release, only the “eligible population” can get vaccinated for free in the Centre’s vaccination centres. The release states:

“Vaccination shall continue as before in Govt. of India vaccination centres, provided free of cost to the eligible population as defined earlier i.e. Health Care Workers (HCWs), Front Line Workers (FLWs) and all people above 45 years of age.”

As is visible above, this “eligible population”, as of April 21, did not include the 18-45 age category. Until this changes, this implies that people between 18 and 45 will not be able to get the shot for free in the Centre’s vaccination centres.

Why have some people been angry since the SII announcement?

SII was selling the first 100 million doses of Covishield to the Central government for Rs 150 plus GST. This means that the Centre was paying Rs 150 and GST for each dose of Covishield it bought from SII.

Initially, it was thought that state governments would alone have to buy Covishield from SII for a price of Rs 400 and GST while the Centre got it for Rs 150 + GST.

However, as SII chief Adar Poonawalla clarified to CNBC-TV18, SII would now begin selling Covishield to the Central government at Rs 400 too and no such disparity would be there. The ‘Rs 150 plus GST’ tag was only for the initial contract for 100 million doses.

#Sanjeevani | After opening up the vaccination policy, new price for govt is ₹400/dose & pvt hospitals will be charged ₹600/dose, says @adarpoonawalla of @SerumInstIndia. Tells @ShereenBhan new vaccine pricing is still 33% to 50% of global vaccine prices anywhere in the world pic.twitter.com/rkannUVAbi

The price of Rs 400 is significantly higher than what the Centre got for the first 100 million doses and places a financial burden on states who get no such freebies.

Critics have asked what is keeping the Centre from asking SII to make sure that the initial acquiring rate of Rs 150 + GST is maintained.

In the time since this FAQ was first published, confusion has emerged over the price at which SII would sell to the Central government, with India’s Union health minister asserting that the price is going to remain at Rs 150, contrary to what Poonawalla has said. Read more about it here.

But some were angry even before the SII announcement…

That is true. Some opposition parties and health activists are concerned that this system will make vaccines more expensive than it appears right now.

In addition to the fact that there is no free vaccination for people between 18 and 45, this system might open itself up to middlemen, who could come between the vaccine provider and the private hospital. This will push prices up and as the Centre has removed itself from the discussion, there cannot be easy recourse in such a situation.

Plus, when the Modi government announced the decision to widen the vaccination net, India was and still is reeling from a shortage of vaccines. The Centre has not indicated how this shortage will be met with, or if it expects the move to liberalise the vaccine market will take care of any shortages.

Why have you kept Covaxin out of the picture?

In their statement, Bharat Biotech noted that they will continue to sell to the Centre at Rs 150 per dose. For state governments, their price is Rs 600 and for private hospitals, it is Rs 1,200.

So how much do I have to pay for a Covaxin shot?

As we have speculated with Covishield, additional costs may be tacked on to this. If you live in a state which has not promised free vaccines for all, it is likely that you will have to pay Rs 600 + GST + transportation costs + any other costs for a vaccine shot at a state government hospital. The price is similar for a shot at a private hospital, which may include administration charges, transportation and GST in addition to the Rs 1,200. The actual price, however, will only be known once the third phase of the vaccination drive starts and is likely to vary from hospital to hospital.

Do we know the prices of any other vaccines?