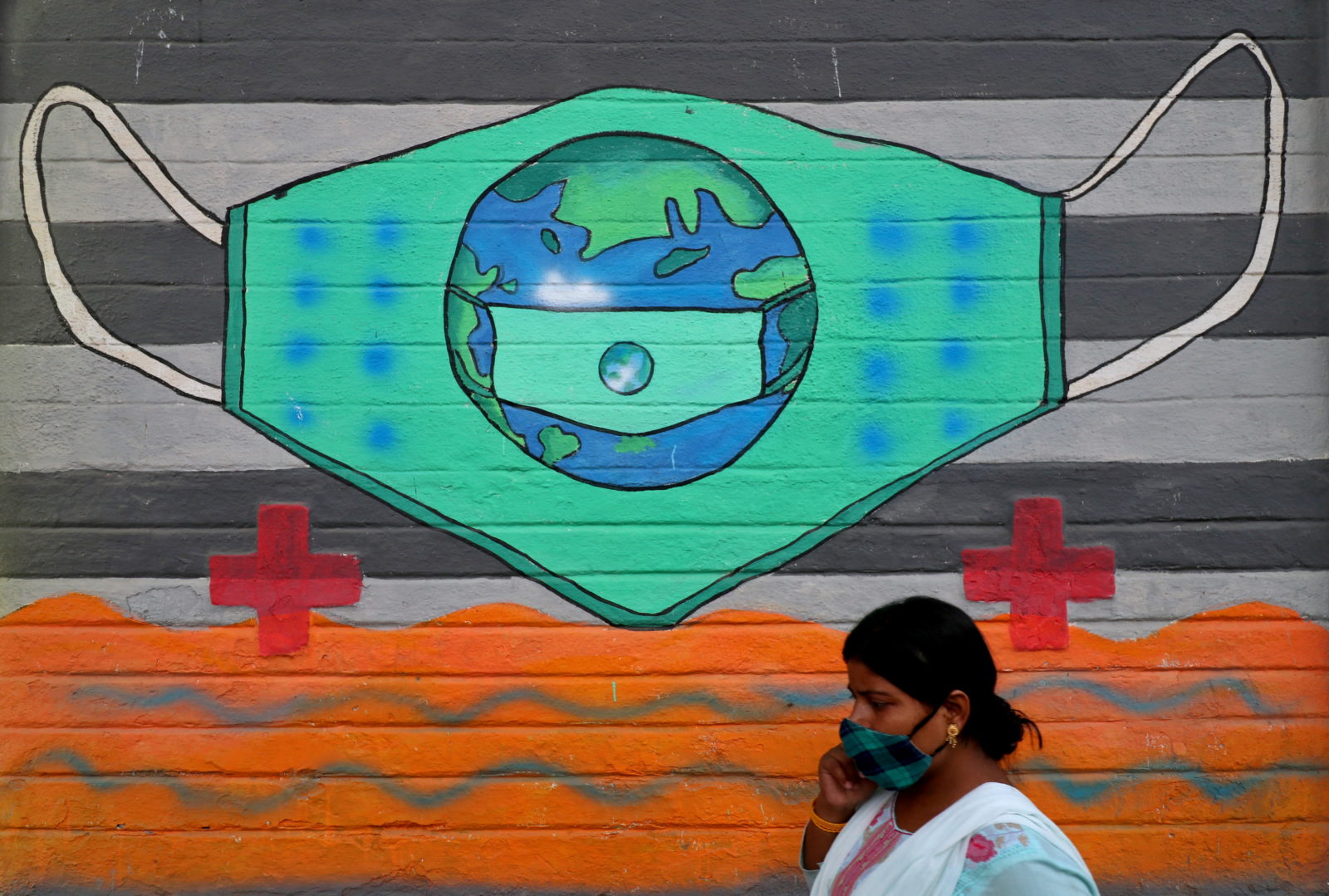 A woman wearing a protective face mask walks past a graffiti on a wall in Mumbai. Photo: Reuters/Niharika Kulkarni/Files

New Delhi: Slack in following COVID appropriate behaviour, a susceptible population and spread of variants could be among the main reasons for the second wave of coronavirus that has hit the country, healthcare experts have said.

The number of new coronavirus cases in India touched a record daily high since the outbreak of the pandemic with over 1.15 lakh new infections being reported in a span of 24 hours, pushing the nationwide COVID-19 tally to 1,28,01,785 on Wednesday.

The single-day rise in cases breached the one-lakh mark for the second time in three days.

“Although the government has not acknowledged it as there is no clear evidence, there is definitely a role of new variants of concern which are more infectious and probably some of them are immune escape variants also and they are spreading faster than the earlier versions,” Babu told PTI.

Immune escape variants are not detected by the immune system. Some mutations confer this property to the virus and the antibodies are unable to detect it. The Brazil variant is generally not detected by antibodies and then there is a sub-group of South African variant that is also not detected, he said.

“Most importantly, the pace of vaccination is not as fast as one would expect India to be in. The pace at which the vulnerable have to be covered is not satisfactory,” he said.

He said it is very difficult to specifically say if the variant factor is responsible for the surge in India because genome sequencing has not been done to the levels that are expected.

“So we are left guessing but nothing else can explain why cases are surging so fast and affecting the areas that presumably had higher levels of antibodies in serosurveys,” he said.

Talking about the possibility of reinfection, he said it might be happening because of waning antibodies. “There is a role for reinfections, but it has not been studied in detail. As a result, there are a greater number of people who are susceptible,” he said.

Babu further said environmental factors and community behaviour are also playing their part. “Almost everything we do, whether it is rallies, melas, marriages, all this lead to transferring of infection from one person to another.

“Unless we act on each of these, work on understanding the virus and reducing its geographical area, building host immunity by speeding up vaccination and changing the environmental factors that facilitate faster spread, we can’t really expect that the wave will be controlled.”

“Right now, it is surging ahead as a combination of all these may be at play,” he said.

Speaking in the same vein, epidemiologist N K Arora said the upsurge is because of “4-5 factors acting simultaneously”. He said all viral infections come in a wave, which is a natural phenomenon, and COVID-19 reached its crescendo in September last year. After ebbing, it is again seeing a crest.

He said the fear factor which was there in the initial six months of this pandemic has come down significantly as the economy has opened up, people have started moving out and have become less careful when it comes of COVID-appropriate behaviour, he said.

Moreover, social gatherings have increased and people have also started going out on vacations. “All this is linked to the decline in fear factor and the perception that it is a mild disease,” he said. He also noted that wearing masks has drastically reduced.

Responding to a question on whether new variants of the coronavirus could be responsible for the surge, Arora said there are several aspects to the issue.

“If we look at variant isolation rate versus the number of cases coming up it looks like they might be contributing but not a significant proportion of this upsurge is because of the variants,” he told PTI. He said the number of susceptible people in the community is still very high which is leading to this upsurge.

Prof Jayaprakash Muliyil, former principal, Christian Medical College, Vellore and chairman of the scientific advisory committee of the National Institute of Epidemiology, said a new susceptible pool has emerged because of people being a little less anxious about COVID.

Earlier, people were frightened, but now the same population is less worried.

On the role of variants, he said they could increase the attack rate, but there has to be a susceptible population. A new variant which completely ignores previous immunity acquired due to the infection is a very remote possibility and presently there is no evidence that it is operating, he added.