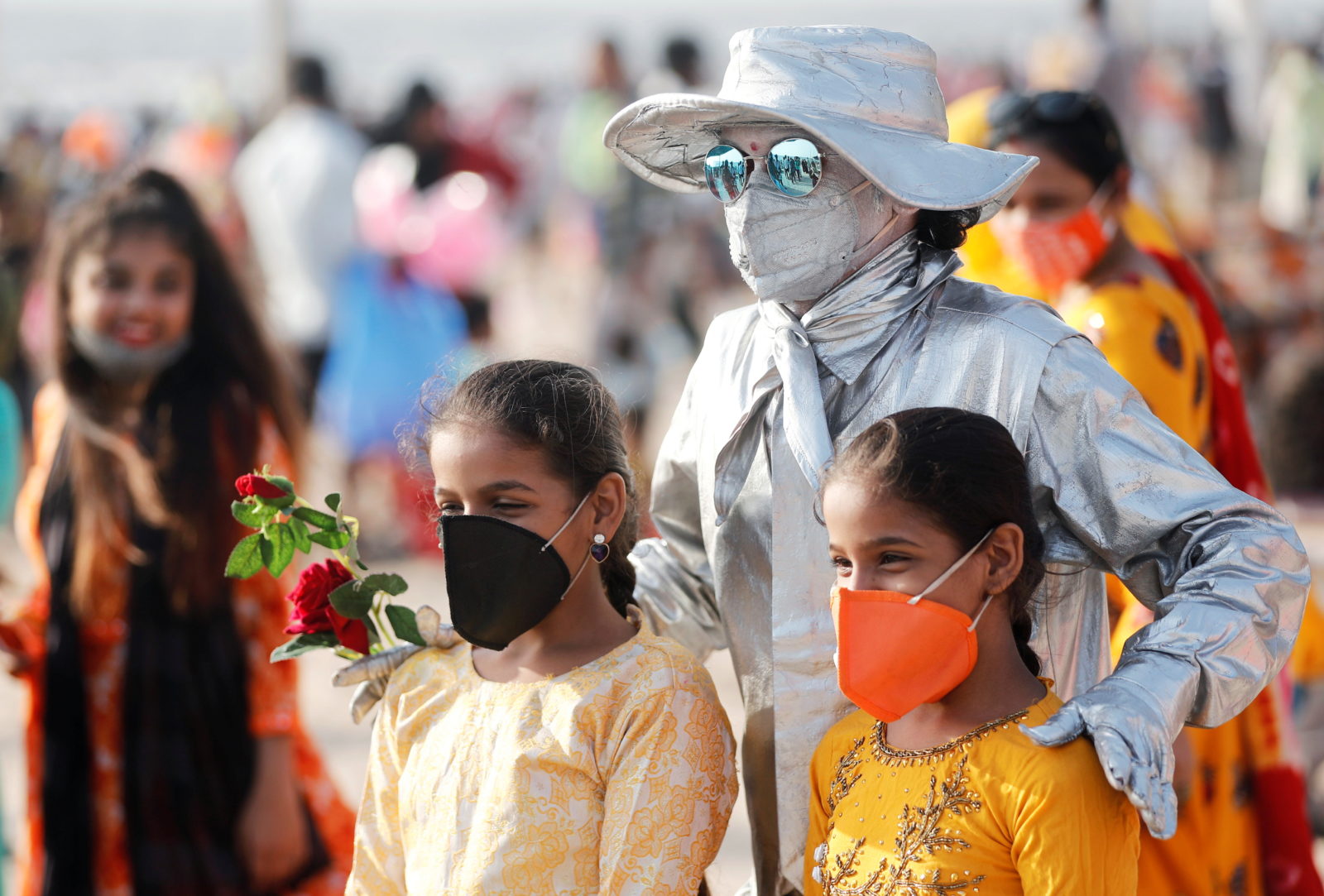 People pose with a performance artist at a beach amidst the spread of COVID-19 in Mumbai, April 4, 2021. Photo: Reuters/Francis Mascarenhas

India is currently experiencing a massive COVID-19 surge. The daily case count has crossed the 100,000-mark, and the country has already reported the highest number of daily new cases in the world for the last two days – and all this despite limited testing. The reported positive rate is around 8% for the whole country, and nearly 30% in Maharashtra.

The growth in the number of new daily cases has been exponential and there is no doubt that the second wave is going to be more severe than it was last year, at least if the steep rise is any indication. In fact, since February 15, the number of cases has increased to more than 10-fold.

Some experts have said that the current wave is propelled by emerging mutant variants – notwithstanding the government’s denial. Natural evolutionary changes in the virus have rendered it more transmissible than previous strains.

India’s health ministry recently released data on genome-sequencing of 10,787 samples from 18 states, which showed 771 cases of known variants; 736 of B.1.1.7; 34 of B.1.351 and one of P.1. There were 336 samples from Punjab that tested positive for the B.1.1.7 variant. A new variant of concern (VOC) with two mutations – E484Q and L452R – was found in 206 samples from Maharashtra. Officials also reported this strain in samples from Punjab, Delhi and Gujarat.

A mutation is a change in a genetic sequence. Mutations occur in nucleotides, the basic substances that make up the big RNA and DNA molecules. The sequence of these nucleotides in the RNA or DNA determines the amino-acid sequence. Amino acids are the building blocks of proteins. And proteins are species-specific. A mutation in a viral genome can change the encoded amino acid sequences, which can change the structure of the protein that the life-form produces.

Mutations are to be expected, but not all of them are purposeful or of apparent benefit to the virus. The spike protein of the novel coronavirus has a total length of 1,273 amino acids, numbered from 1 to 1273. Regions on this protein have specific residues – or slots – for different amino acids.

The most significant part of the spike protein is the receptor binding domain (RBD), which is responsible for attaching the SARS-CoV-2 virus to the human ACE2 receptors on some cells, to infiltrate those cells. RBD is denoted by residues numbered from 319 to 541. The main functional motif in RBD is the receptor-binding motif, which forms the interface between the spike protein and human ACE2 receptors and represents residues from 438 to 506.

Most mutations are inconsequential and don’t alter the virus’s behaviour. But some mutations trigger changes in the spike protein and other key areas, resulting in changed viral attributes. Specifically, any mutation that occurs at amino acid residues 319-541 – especially between 438 and 506 – may significantly impact the virus’s infectiousness, transmissibility, severity and/or its immunity-evading potential.

Thus far, the N501Y mutation has been found to be associated with higher transmissibility and lethality, whereas the E484K mutation largely with immune evasion and reinfection.

Then there is the so-called “double mutant” strain, with the E484Q and L452R mutations. Both these point substitutions fall in the key RBM (438-506) region of the RBD. So they may induce major changes in the virus’s properties. E484 is a known vaccine immunity evader mutation. A recent study on the “California lineage” (B.1.427/B.1.429) has found the L452R mutation (leucine L replaced with arginine R at 452) could also have strong immunity-evading potential.

Does this mean we can be sure that the ‘double mutant’ will have a major impact? No – because this is not as straightforward as it seems. The mere presence of a few mutations in the RBD does not mean much. The P.1 variant, despite having a virtually identical triplet of mutations (E484K, K417N/T and N501Y) is significantly less resistant to naturally acquired or vaccine-induced antibodies than the B.1.351 variant, suggesting that changes outside the RBD impact neutralisation.

This is also why it is tricky to tell what properties the different variants will have just by looking at the sequences and defining the mutations.

The new Indian VOC does not have any deletions, so it may ‘autocorrect’ itself, and if this happens, this strain won’t last long in the population. But it could still cause a sudden rise in the number of cases – perhaps even exceeding the first wave. Put differently, the second wave may be stronger than the first one but the causative virus may not become a wild virus. It is likely to be country-specific and not spread around the world.

Thus far, the Indian government has denied the presence of a new lineage of viruses consisting of these two mutations (L452R and E484Q). However, the amount of genetic sequencing in India has been quite inadequate, so we are not in a position to confirm whether the new VOC has reached epidemiologically significant proportions. The bottomline is that as new variants emerge, we need to do a lot of sequencing and vaccine studies to understand their significance.

In the absence of widespread real-time genomic surveillance, it is also difficult to conclusively prove the exact culprit. But going by phenotypic data, it seems like the B.1.1.7 variant could be an important driving force. Scientists already know that B.1.1.7 is 70% more transmissible and 60% more lethal than its predecessor strain but has minimal immune evasion. Thus far, the new wave has also been characterised by high infectivity and low mortality; but we could still witness a rise in the number of deaths if variant becomes more prevalent, as has happened in the UK.

Many have raised questions about the probable utility of the COVID-19 vaccines currently available in India, against the new variants circulating in many states. These vaccines are Covishield and Covaxin, and have been given out since January 16 this year. The vast majority of doses administered thus far are of Covishield (92% in late March).

Should we continue using Covishield in places where the B.1.1.7 variant and other new variants are emerging? How efficacious will it be? Do we have other options? Will Covaxin be more efficacious?

The B.1.1.7 variant is not usually considered to belong to an immune-escape lineage. And most new vaccines that have been tested against this variant (Novavax in efficacy trial, Pfizer-BioNTech and Moderna vaccines in laboratory studies) have found only modest reductions in efficacy or neutralisation titres1.

However, a study recently published in The Lancet reports that Covishield retains a meaningful degree of efficacy against the B.1.1.7 variant – but it had almost nine-fold reduction in neutralisation titres against B.1.1.7 and a greater than 10 points’ reduction in the point-estimate of efficacy than against other lineages (70.4% v. 81.5%).

Covishield also failed to offer any reasonable protection against the B.1.351 variant. Two other vaccines, Novavax and Janssen (Johnson & Johnson), afforded a reasonable degree of protection.

Remember that the B.1.351 variant contains the E484K point mutation (a substitution) that has also been found in many samples from around India; this mutation is also involved in the ‘double mutant’. Since the 484 residue is strongly associated with immune evasion, the chances of Covishield providing any significant efficacy against symptomatic illness is quite remote. However, it can retain reasonable protection against severe disease and death owing to good T-cell immunity.

There has been no study of Covishield’s efficacy against different variants in India. There is an urgent need to perform such studies, including to understand and/or quantify reinfection rates among people who have received either Covaxin or Covishield.

There is also no efficacy data available for Covaxin against different variants. One small laboratory study conducted against the B.1.1.7 variant isolate in January this year found that Covaxin had negligible reduction in neutralisation against the variant. There is no data on its efficacy against E484-containing variants, like the B.1.351 variant.

First, we need to urgently ramp up our genetic-sequencing programme. A sincere attempt should be made to assess the efficacy of existing, approved vaccines against the new variants.

Other, more efficacious COVID-19 vaccines like Novavax’s protein-subunit and Janssen’s Ad26 vector vaccines, which have demonstrated higher efficacy against variants with the E484K mutation, must be approved on an emergency use basis, overriding the need for local trials.

Russia’s Sputnik V vaccine is another candidate that India can consider for accelerated approval, although recent reports have found its efficacy to be limited against the B.1.351 variant.