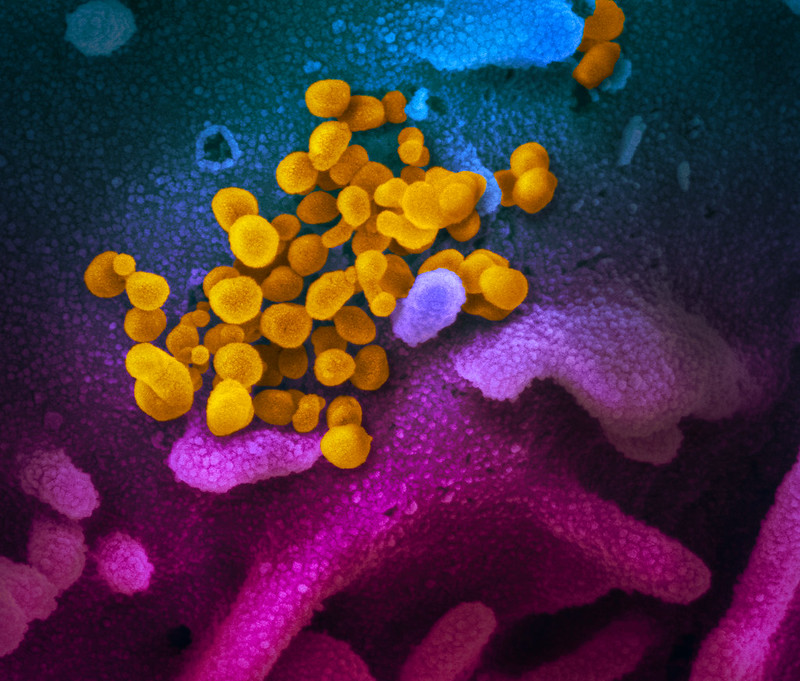 A SEM image shows of SARS-CoV-2 (yellow) isolated from a patient in the US, emerging from the surface of cells (blue/pink) cultured in the lab. Image: NIAID/Flickr, CC BY 2.0

Recent genomic studies from the CSIR Institute of Genomics and Integrative Biology and the National Centre for Disease Control, both in Delhi, on emerging ‘variants of concerns’ (VOCs) and their impact on the epidemiology of COVID-19 in northern India has confirmed that one VOC – B.1.617.2, recently dubbed the ‘delta’ variant – was responsible for India’s ferocious second outbreak.

This variant replaced the existing wild type and the B.1.1.7, a.k.a. alpha, variant in most parts of the country in April-May 2021 as the dominant variant in circulation. The delta variant is highly transmissible (50% more than alpha) and has significant immune escape properties.

The researchers reported that despite reporting 56% seropositivity in February 2021, Delhi could not prevent a massive fourth wave in the region. This was due to a higher effective reproductive number – 2.0 for the delta variant v. 1.2 for the alpha variant – and lower neutralising ability of the immunoglobulin G antibodies against the virus’s spike protein.

However, there have thus far been no indications that the delta variant causes more severe illness than other variants. We need more research to ascertain this.

The delta sublineage retained the mutation L452R, but replaced the ‘escape’ mutation E484Q with a new mutation, designated T478K. This one sits directly on the receptor-binding motif of the RBD.

Overall, the delta variant has eight mutations in the spike protein, including the predominant D614G substitution. And among all spike protein mutations, it has three in the N-terminal domain including, one deletion at the 156/157 residue, two in the vicinity of the S1/S1 cleavage site, and two more in the receptor-binding motif.

Apart from these three sets of key mutations, there are several others in other parts of the genome. Together, they give the delta a distinct personality. While the mutations in the RBD drive its extraordinary transmissibility and immune-escape potential, the company these mutations keep determine the virus’s overall infectiousness, virulence and immune evasion.

The delta variant may soon become the most dominant COVID-19 strain in the world, leading to rapid outbreaks in countries without high vaccination rates. So far, it has already spread to more than 60 countries, including the US and the UK. In the latter – with a high rate of vaccination – the variant has brought the country to the verge of a new, third wave.

A few epidemiologists have also said that the delta could become the dominant variant in the US by the end of July 2021. Many Asian countries that did well to contain local COVID-19 outbreaks last year have stumbled this year, due to the delta.

As it spreads further, it could accrue more or other mutations that could give rise to potentially more dangerous variants. Vietnam’s health ministry has already announced that it has detected a variant that appears to be a hybrid of the alpha and delta variants.

The grimmest news on the delta variant came recently through a study conducted by Public Health England. It found that the Pfizer-BioNTech and Oxford-AstraZeneca are only 33% efficacious against the delta after one dose and 88% and 60%, respectively, after both doses.

This means a single dose of either vaccine won’t suffice to protect people against (symptomatic) infections of the delta variant. These results were reinforced by another study published in The Lancet, on June 3. It suggested, based on lab-based tests, that antibodies induced by the Pfizer-BioNTech vaccine are less able to neutralise the delta variant.

These results have important implications for India. For starters, they have put the health ministry in a tight spot. On May 13, India’s National Technical Advisory Group on Immunisation revised the recommended gap between two doses of the Oxford-AstraZeneca vaccine – Covishield – from 4-8 weeks to 12-16 weeks.

The health ministry’s reason was that Covishield’s efficacy is reasonably better after 12 weeks. But though the body won’t admit it publicly, the real reason is the low availability of vaccines; increasing the inter-dose gap buys the government time to procure and distribute more doses.

But the new studies tell us that a single dose is no good and that we must provide two doses at the earliest – within four weeks if necessary – and close the immunisation gap.

This is also a reminder that our existing vaccines can help us lessen the pandemic’s devastation if we can continue to deliver both doses at the right time and in equitable fashion.

In fact, it’s important to remember that vaccines don’t protect; vaccination does. Pandemics of the past have peaked and ended without vaccines. Vaccines’ real import is the fact that they save lives. Fewer people will die of COVID-19 if we use them judiciously.

Should the First COVID Human Challenge Trial Also Be the Last?