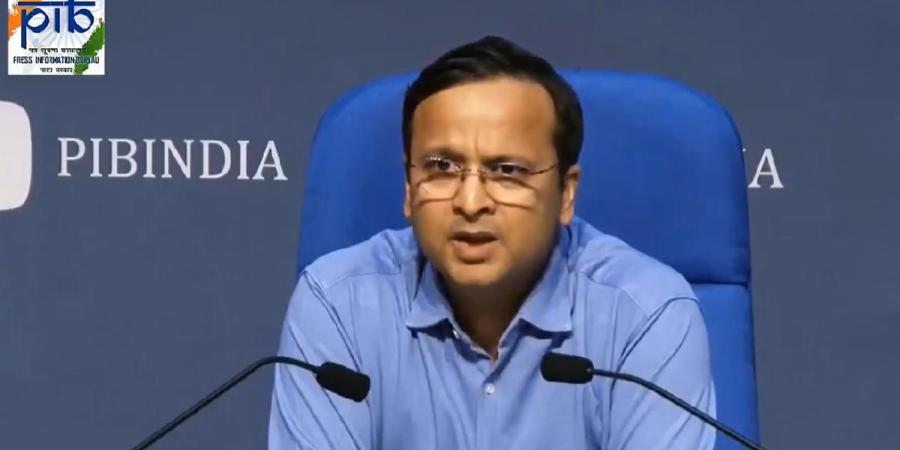 New Delhi: Two people have been confirmed to have an infection of the omicron variant in India, senior officials of the Union health ministry have said.

At a press conference at the National Media Centre in New Delhi on December 2, health ministry joint secretary Lav Agarwal revealed this fact. He added that both individuals were recently in Karnataka, via air travel.

Both individuals are male – aged 66 years and 46 years. Agarwal didn’t divulge any further details about the port(s) of origin of these individuals, the airport(s) at which they landed and where they are currently receiving medical attention, deferring to their privacy.

This said, sources in the Union health ministry indicated to The Wire Science that both individuals flew in from South Africa, and that they are currently being attended to in Bengaluru.

Update, 8:07 pm, December 2: The Bengaluru municipal corporation has issued its own statement about the two individuals, with more detailed timelines. One of them, it said, has already left the country while the other is a native Banglorean. Both of them are reportedly fully vaccinated.

This statement diverges from the health ministry officials’ claim that both individuals had had recent air travel – saying only one of them had recently flown in from South Africa, while the other, the one aged 46 years, was already within the city.

If Bengaluru’s statement is more accurate than the health ministry’s account, the implications are significant: that an individual with no recent travel history could be infected with the omicron variant.

Health ministry officials didn’t respond to requests to verify the Bengaluru’s statement’s claims nor comment on its contents.

2 people found positive for the #Omicron variant of COVID19. One person is about a 66-year-old, South African national, who has gone back. Another person is a 46-year-old doctor. He doesn’t have any travel history: Karnataka Health Minister Dr K Sudhakar pic.twitter.com/5aBjETtIUt

South African researchers were the first to report the existence of the omicron variant (B.1.1.529), in late November. Experts have hailed this early warning and have spoken out in favour of increasing vaccination coverage – instead of imposing knee-jerk travel bans that may do little to curb the variant’s spread.

Agarwal also said genome-sequencing reports confirmed the presence of the omicron variant in test samples obtained from the individuals late on December 1.

Vinod Paul, chairman of India’s COVID-19 task force, said at the press conference that both individuals had mild symptoms.

Sujeet Kumar Singh, director of the National Centre for Disease Control (NCDC), said health workers had traced the “remotest” contacts of the individuals.

However, he refused to reveal the number of contacts – or how workers had completed contact-tracing so fast even though the genome-sequencing report was received only on December 1. Singh only said that “contract-tracing comes under the domain of state governments.”

Update, 8:09 pm, December 2: According to the Bengaluru municipal corporation statement, the second individual had 13 primary contacts and 205 secondary contacts. Five contacts of the latter have tested positive for the novel coronavirus as well, and their genome-sequencing reports are awaited.

Paul said the Indian government had no plans to introduce booster doses or to decrease the gap between two doses of the COVID-19 vaccines it has approved for use, in light of the detection of the omicron variant. At present, the inter-dose gap for Covishield is around three months and 28 days for Covaxin.

Both officials also ruled out any blanket flight bans – in line with WHO recommendations to abstain from such measures.

“The science [on the new variant] is emerging,” Paul said. “All these decisions – flight ban, reducing gap between doses or introducing boosters – require more evidence, which is being gathered. It is ongoing work.”

If an individual tests positive, health workers will obtain a further sample to use for genome-sequencing.

Since the discovery of the omicron variant in late November, he added, 883 virus samples have been sequenced. Of these, all but two – of the individuals who landed in Karnataka – were found to contain the delta variant (B.1.617.2).

Indian Council of Medical Research (ICMR) chief Balram Bhargava also said at the presser that it’s too early to say anything about the efficacy of COVID-19 vaccines against the omicron variant.

Recently, Samiran Panda, the head of the epidemiology division at ICMR, had said that Covaxin may work better than other vaccines as far as omicron is concerned. (ICMR helped Hyderabad-based Bharat Biotech develop and test Covaxin.)

At the presser, Bhargava attempted to distance himself from Panda’s claim, saying that though the idea seemed reasonable, officials would have to conduct the corresponding effectiveness studies to be sure.

Independent experts had said claims, by Bhargava and others, at the time Covaxin was approved for use that ‘it could work better against new variants of the virus’ were unfounded. ICMR also hadn’t conducted any tests at the time to ascertain precisely such claims against the delta variant, which was then becoming the dominant strain in India.

More recent studies have also found that Covishield works somewhat better than Covaxin does against the delta variant.

“We will need to undertake proper … studies of Covaxin to come to any conclusion about its effectiveness against omicron,” Bhargava said.

Concerns about the existing COVID-19 vaccines’ efficacy against the omicron variant have arisen because some 30 of the 50 mutations in the variant’s genome pertain to the virus’s spike protein. Scientists are concerned – speculatively – that these mutations could have modified the protein too much – while current vaccines are designed to train the body to react to this protein.

While India’s overall COVID-19 situation is under control, Agarwal said, 15 districts – mostly in Kerala, Mizoram and Arunachal Pradesh – have continued to report a test positivity rate (TPR) of more than 10%.

The TPR is equal to the percentage of people who tested positive relative to the total number of people tested. The Union health ministry considers a TPR of 5% or lower to be desirable.

All officials also stressed that India’s most important tools with which to beat back its COVID-19 epidemic remain following COVID-appropriate behaviour and being fully vaccinated.

This is a developing story. Please check back for more details.