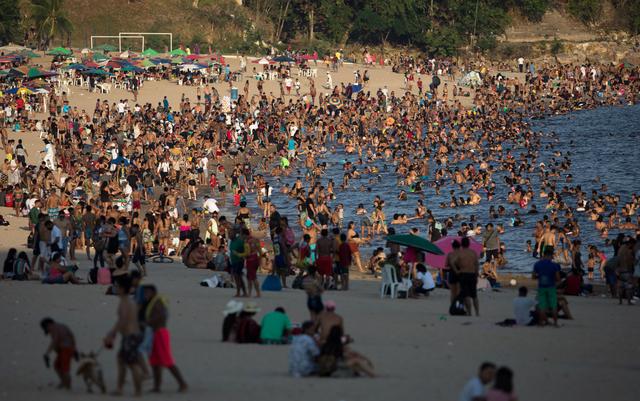 New Delhi: Herd immunity is “very difficult” to achieve and one should not think of it in “practical terms” in India, especially in the times of “variant strains” of COVID-19 and “waning immunity”, claimed AIIMS director Randeep Guleria on Sunday.

Guleria was speaking at the ongoing edition of Jaipur Literature Festival (JLF) in a session on his book “Till We Win: India’s Fight Against The Covid-19 Pandemic” – co-authored by public policy and health systems expert Chandrakant Lahariya and renowned vaccine researcher and virologist Gagandeep Kang.

“Herd immunity is something that is going to be very, very difficult to achieve and it is something one should not really think of in practical terms, because the variant strains and varying immunity with times can lead to a chance where people may have reinfection or get infection again,” the All India Institute of Medical Sciences (AIIMS) director said.

“And one should also remember that a large number of people have had mild infections and we do know that those with mild infection tend to have less antibody production, their antibodies tend to wane over a period of time,” he added.

Experts say herd immunity is said to have been developed in a population segment if at least 50-60% of those are found to have the presence of antibodies in a sero-prevalence survey.

Herd immunity implies that in any set of people in a community, after becoming affected by the virus, a lot many of them become immune to it, on account of antibodies developed in response to it. And, hence, such people become a protective layer between the infected person and unaffected people, thereby breaking the chain of viral transmission.

Guleria here also gave the example of Brazilian city Manaus which even after having achieved the herd immunity in October is now battling the second COVID-19 wave.

“Brazil had claimed that they got heard immunity with almost 70% of the population being protected because of the past infection, and yet because of the Brazilian variant and waning immunity a large number of people got infected again. And now they are in a very bad situation because of resurgence of cases,” he noted.

Here, he also asserted that no sero-surveys done so far has suggested India being “anyway near” achieving the herd immunity.

Over 21% of the population, aged 10 years and above, showed evidence of past exposure to COVID-19 in the Indian Council of Medical Research’s (ICMR) latest national sero-survey out on February 4.

Stressing on the importance of vaccination, which he said is essential in India’s fight against the coronavirus, he said they too will change with time tackling not only the “emerging variants” but giving more robust immunity lasting for a longer period of time.

“What we have today is not the only vaccine, we will have better vaccines as time moves on and as research moves on. But right now we should take what we have if we want to really make sure that the situation in our country does not deteriorate,” he added.

The JLF, now in its 14th edition, features over 300 speakers and performers representing around 25 Indian and 18 international languages and over 23 nationalities.